It was Sunday evening, the weekend after Labor Day, and we had just made a long, wearying drive into town from Connecticut. We did not feel like cooking once we’d climbed three flights of stairs with all the bags, computer equipment and a howling cat. (Among the many Kafkaesque aspects of owning a loft building in SoHo is the annual fight against fines imposed by the city for not having the elevator inspected, even though there is no elevator.) My young son, who usually likes to eat Chinese takeout on a Sunday night, wanted to see what the city was like, since he’d been away all summer. So we strolled over to Liam, a new bistro that opened just north of Houston Street while we were gone. The streets of SoHo were packed with shoppers from New Jersey and people trying to look like locals in nose rings, tattoos, 10-inch platforms, pink hair and leopardskin-patterned T-shirts. It made the green pants and loafers-without-socks of northwest Connecticut suddenly seem very far away.

Thompson Street above Houston was a lot less hectic. The evening was cool and bright, and Liam’s doors were folded back so that tables could be set out under the awning. Already the restaurant was filling up with pretty young women in slip dresses and their escorts, who were saying things like, “Aren’t I the luckiest guy in this restaurant!” as they beamed at their companions.

The three of us sat down at a table inside. My son asked for a glass of milk, and my husband and I consulted the wine list, which is quite short, but has some good choices at decent prices. We opted for an Oregon pinot noir at $27. “Thank goodness you ordered that wine!” said the waitress. “We’re out of, like, seven of them. It’s the one we have!”

With a name like Liam, it would not be unreasonable to expect to find potato cakes and Irish stew on the menu of this restaurant. But the Liam here is not as in Neeson (although I imagine his origins are no less Irish), and the food shows not the slightest influence of Ireland. William (Liam) Prunty, a former sous-chef for David Bouley, was executive chef for Jean-Claude Iacovelli, whose small empire of restaurants-Jean-Claude, Caffe Lure, SoHo Steak-are all within a few blocks.

Mr. Prunty has adopted the same formula that made his ventures with Mr. Iacovelli so successful. His restaurant is boisterous and informal, with brick walls, a long mirrored bar, paper cloths on the tables and rock music on the sound system. The food is very good-and inexpensive. There aren’t many places around where you can eat like this at these prices. First courses are all under $10, and the most expensive main course is the loin of lamb, which costs $16.

We started off with saddle of rabbit, served with mizuna, cracked quinoa and figs in a delicate mustard oil and port sauce. It was so good even my young son liked it (although he said that, on the whole, he thinks chicken tastes better). Salmon wrapped in a shredded potato crust came with a sprightly salad of pea shoots and golden beets. And two soups (which we tried a few nights later) were extraordinary: an oyster stew made with barely cooked oysters afloat in a creamy broth with saffron noodles and julienne vegetables; and a fragrant, unusual gazpacho made with cumin, lobster and pearls of Israeli couscous.

Mr. Prunty’s dishes seem quite simple at first glance, but they are actually complex, and he has a real knack for combining unexpected tastes without overreaching. The loin of lamb was generously peppered and came with salt-baked fingerling potatoes, braised baby bok choy and portobello mushrooms in a deep, vivid sauce made with its natural juices. My 9-year-old son devoured every morsel, prompting our friendly waitress, who had thoughtfully brought it to him as we ate our first courses so he wouldn’t get restless, to tell him she was going to bring him a treat for cleaning his plate. “She thinks I’m a tiny kid!” he said, bemused.

Equally as good as the lamb was the crisp duck, served with black plums, glazed cipollini onions and a crunchy risotto cake. The juicy roast chicken came with a ragout of wild mushrooms and asparagus as well as truffled mashed potatoes, just the sort of comforting dish you want on a Sunday night. Grilled tournedos of salmon wrapped with leeks and served on a fricassee of fava beans and peas was also first-rate, as was the striped bass with succotash and braised fennel, a smoked clam roast permeating the dish. Cod in a rich, spicy lobster nage, with tomato and spinach, was pleasant but not in the same league as the others.

After we had finished the main courses, our waitress brought my son his treat: a warm chocolate cake with Tahitian vanilla ice cream, which he also proceeded to polish off entirely. Another dessert was a terrific banana tart.

When we walked home, a half-moon was hanging over the buildings. My son wanted us to hold his hands and swing him over the pavement as we used to do when he was little. It wasn’t a great success.

“You’ve grown too big for that now,” said my husband. “We can hardly lift you off the ground.”

“I’m not too big,” replied my son. “I just ate too much. That food was too good. Next time perhaps we should stick to Chinese.” 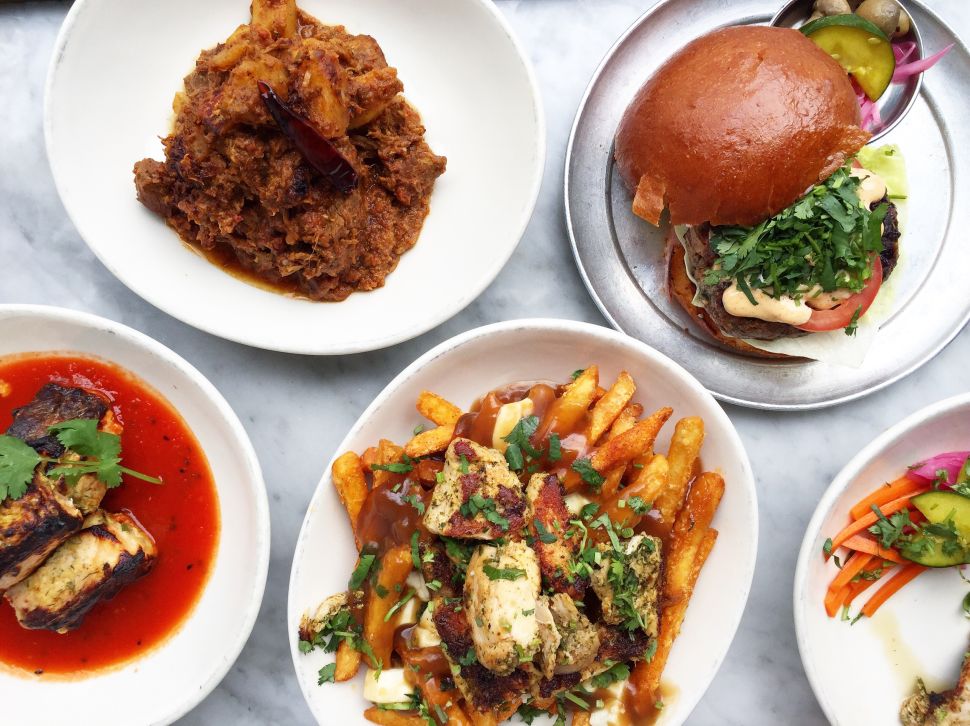