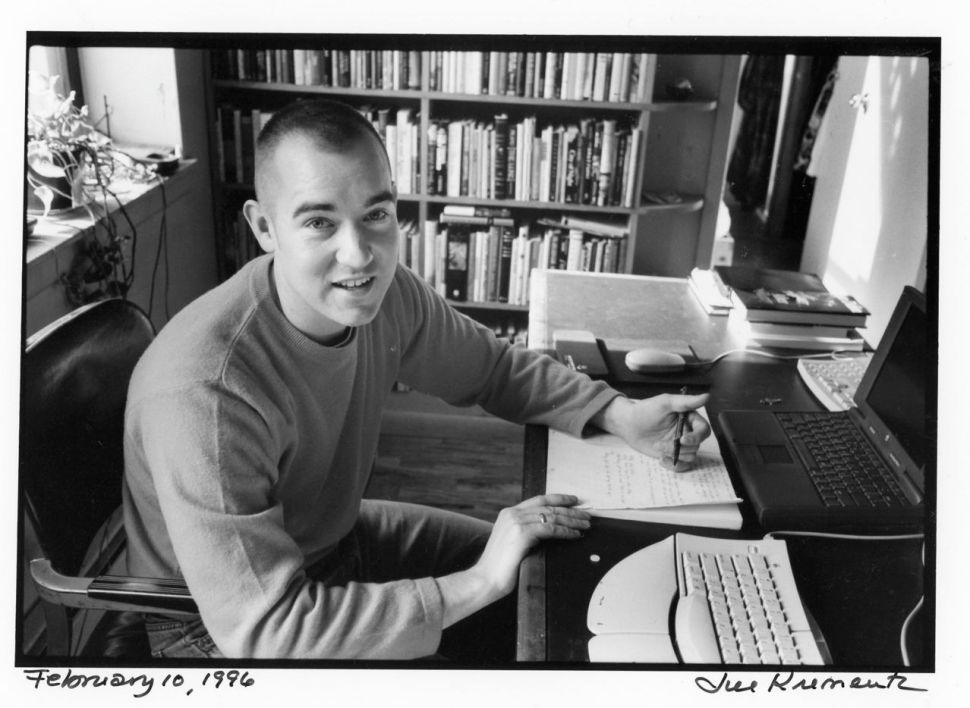 Dale Peck photographed by Jill Krementz in NYC on February10, 1996

Now It’s Time to Say Goodbye is the name of Dale Peck’s new literary thriller, but it also describes his relationship with his publisher, Farrar, Straus & Giroux. For in late May, as his book was enjoying some rave reviews, Mr. Peck, the author of Martin and John and The Law of Enclosures , with the help of his new agents, Zoë Pagnamenta and Andrew Wylie, was in the midst of abandoning his publisher of seven years. His new house: Rob Weisbach’s imprint at William Morrow-up until now distinguished primarily by spectacular celebrity-book flops and fabulous catalogues.

On May 28, Farrar’s vice president and executive editor John Glusman was stroking his strong jaw and wondering why he still hadn’t heard from agent Andrew Wylie about his offer on Mr. Peck’s next books. It had been over a week. He gave Mr. Wylie until the next day. When he didn’t hear back, he conserved his flinty voice and promptly fired off a fax withdrawing his offer.

Fast-forward to June 2, at a panel sponsored by Farrar and Harper’s on fiction and film, where Mr. Glusman was forced to introduce his departing author Dale Peck, formerly of Hutchinson, Kan. Very difficult. The next day, Mr. Glusman heard that Mr. Wylie was going out with a general submission. Farrar founder Roger Straus rang up the Wylie agency, managed to get Andrew Wylie yanked from a meeting, and informed him that Farrar was reinstating its offer. He demanded a response by noon. Mr. Wylie called back with a price of $700,000.

Mr. Straus explained that he had looked at the numbers-net sales of 10,000 for Martin and John , and around 6,000 for The Law of Enclosures -and offered Mr. Wylie $200,000 and two free tickets to his psychoanalyst. Alas, it seemed time to say goodbye.

The timing couldn’t have been more awkward. Farrar was smack in the middle of promoting Mr. Peck’s third novel. “It creates ambivalence in the house,” said Mr. Glusman, who was baffled by the chain of events. If Mr. Peck was so unhappy, why was Farrar offered a chance to bid? And why the ludicrously high amount, when Rob Weisbach won the day with $250,000 advance and a guaranteed promotional budget of roughly $100,000? According to Mr. Wylie, they wanted to fulfill the option clause (current publisher gets first crack at next book), a detail that Farrar, said Mr. Glusman, considers the least legally binding part of a contract.

Mr. Peck’s explanation is simpler: “We tried to come up with a price that would be too high for them.” For the ambitious author, who began his Farrar experience at 24, the most trying battles arose over book covers and the editing of Now It’s Time (length proved particularly problematic), and by the time Now It’s Time had reached the end of the editorial cycle, the exuberant Mr. Peck was deflated. He maintains that his editor was a passive-aggressive, uncommunicative guy who neither liked nor even read in its entirety the 1,160-page manuscript of Mr. Peck’s third novel. “John said he didn’t have time, it was too long-he would edit it as he read it,” said Mr. Peck. According to the author, he and his then-agent Irene Skolnick even offered Mr. Glusman the chance to release Mr. Peck from his contract.

Mr. Glusman, who has edited William Vollmann and Richard Powers, said he read the manuscript twice, as is his custom. According to Mr. Peck, Mr. Glusman, who had been expecting a 450-page manuscript, “hit the roof,” called up Ms. Skolnick and yelled, and then, once editing sessions commenced, proceeded to brandish a calculator, while dropping comments about readers being terrified by so long a book. Two of Mr. Peck’s writer friends had read the manuscript; they hadn’t been spooked by the length.

Certainly, Mr. Glusman had gotten his $145,000 worth of text. But now the challenge of bringing Mr. Peck’s dark and unsettling prose to a more mainstream audience and a larger international market had just become Herculean. Mr. Glusman’s 18 years of experience told him that translation costs might be a problem. Mr. Peck was more concerned about having to chop the novel down by more than half and was irritated by what he felt was Mr. Glusman’s “blasé-hostile” approach.

“Obviously, there were problems of communication,” said Mr. Glusman. “Ultimately, it’s an author’s book. I will never force a change upon an author.” Mr. Peck was the one who finally made the initial call to cut the manuscript in half.

“It was a love-hate relationship,” said one editor who lost out in the bid for Mr. Peck’s next books (a novel and a book of essays). “Dale can be very headstrong, and John stood up to that.”

Mr. Peck also suffers from an acute fear of flying, which meant that Farrar had to stand quietly by while the author tore through the exit gates of various airports. One last-minute cancellation was for a trip to Germany. “I gave them a lot of headaches,” said Mr. Peck, who told his publisher that he didn’t want a book tour for Now It’s Time -news to Mr. Wylie.

One also wonders about the state of his memory; how is it that so many of his recollections are at such great odds with Mr. Glusman’s? For instance, Mr. Glusman described the editing process on Mr. Peck’s critically acclaimed first novel, Martin and John , as a “roughly intense one” that ate up several weeks of afternoons. “We cut 500 pages of short stories to 228 pages,” said Mr. Glusman. Mr. Peck recalled the editing process as a breezy two days.

Mr. Peck, who in planning to complete a seven-novel cycle, fancies himself the postmodern Proust (“I actually hate Proust,” he said), curiously took his literary talents to Rob Weisbach Books, where Mr. Weisbach-who edited Jerry Seinfeld’s Sein Language at Bantam Books-will supposedly edit him. Mr. Weisbach recently lured A.M. Homes from Scribner, and, said one industry observer, is trying to line up writers with an “edgy trendiness.” At Farrar, Mr. Peck felt undervalued. For Now It’s Time , Mr. Peck saw “itty-bitty” advertisements, was offended both by the cover’s “nudie photo” and the minuscule type of his name on the cover. He heard Mr. Glusman’s praise as perfunctory. “I do think I’m one of the best writers around, and I want to be recognized for that,” he said. Looks like sharing the stage with Tom Wolfe, Mario Vargas Llosa and Jamaica Kincaid counts for less and less these days.

Mr. Peck said he is “ecstatic” about his new relationship with Mr. Weisbach, who, he said, expresses opinions without “compunction or fear of alienation.”

“Rob Weisbach is a great promoter,” said one editor who lost out on the bidding. “But … John is a brilliant editor. If I’d been Dale, I would have stayed with him.”

Lawyers for Houghton Mifflin Company, which since 1941 has been publishing the adventures of H.A. Rey’s very mischievous monkey, is opposing a trademark application filed by the New York-based punk rock band Furious George. And front man George Tabb is as mad as the scientists in Curious George Gets a Medal , when the monkey stowed away in a capsule but became a national hero anyhow! In a letter to The Observer , Mr. Tabb refers to his “legal battle with those”-are there children listening?-“fuckheads over at Houghton Mifflin.” His band caters to an older crowd. “Obviously, Houghton Mifflin can’t tell the difference.”

At stake for the publisher is the collective good will that surrounds its furry hero, and, by extension, his 90-some licensing deals, from children’s clothing to Gund toys. Houghton Mifflin expects sales of Curious George products to top $5 million in 1998, and Edgar Bronfman’s Universal Studios is scheduled to release a Curious George movie in 1999, which means that Furious George’s CDs ( Furious George Goes Ape! and Furious George Gets a Record! ) are coming at a particularly naughty juncture. The band has not only practically taken its client’s name, it has also appropriated his bright yellow and red look. The albums, Houghton Mifflin is arguing, “might be erroneously purchased and given to a child.”

Mr. Tabb’s lawyer, Andrew Krents, thinks not. “There’s no likelihood of confusion,” he said, “because it’s clearly a parody.” Furthermore, he said, the band’s name is “an integral part of the group’s artistic expression.” This isn’t about infringing the copyright of mischievous monkeys-this is about art. Mr. Krents is fighting only for use of the band name, not H.A. Rey’s Curious George look, which won’t be used on future album covers. And he expects Houghton Mifflin to seek an injunction that will pull the case into Federal court should the trademark office approve Furious George’s application.

In the meantime, Mr. Tabb continues to decry “corporate behemoths” who seek to “squelch the voice of the people.” He added, somewhat gratuitously, that “the Man in the Yellow Hat is really just a veiled Nazi.