Nine firefighters began digging around the narrow gulch formed between a fallen pipe and a steel plank. They moved through the debris, exhuming rocks, insulation, metal casings and a sheaf of dot-matrix paper.

After five minutes of silence came the cry: “We’ve got a body!” They shined a light into the hole, scooping faster now, the dust thickening around them. A sulfurous odor of decaying flesh had begun to waft through the air.

“Work it out with your fingers,” someone suggested.

Someone bring in the dog!” called another.

A police officer brought a German shepherd toward the opening and pushed her gently into the hole. She sniffed, then stopped.

“We found a piece of skin,” said the officer.

The firefighters leaned back into the hole and continued to dig. But there was no body, only more debris.

This was ground zero at 9:30 p.m. on Sept. 12. Thirty-six hours after the unthinkable, hundreds of New York City firefighters, police and volunteers continued to search the field of debris, working through the night under arc lights, hoping to find survivors instead of bodies. Where the Twin Towers had stood, there were only smoking heaps of charred rubble stretching westward to the foot of the Winter Garden. To the north, the pedestrian bridge that spanned West Street from 1 World Trade Center now lay twisted atop the debris. The second pedestrian overpass, which had been joined to 2 World Trade Center, remained shakily aloft, like a dislocated arm.

With pickaxes, shovels, crowbars and chain saws, the crews filed in steadily throughout the night from the direction of the North Cove Yacht Harbor on the Hudson, passing Caterpillar scows, hydraulic cranes, backhoes and Bobcats. They fanned out atop a ruin of wasted metal sheets and steel girders thickly coated in fine white ash and reams of shredded office documents. Joined by scores of volunteer firefighters and police officers from New Jersey, Connecticut and beyond, they probed the surface for signs of life.

While rescuers worked the debris fields, engineers manning cranes loaded crushed vehicles onto flatbed trucks. With no time to cart out the girders and smashed cars, the trucks simply dumped their loads on side streets.

Most of the rescuers worked beyond their assigned shifts, choosing to stay on even after relief came. When they could work no longer, they collapsed into chairs that had been dragged out of the American Express Building and fell into a drug-like sleep, dust masks still on, oblivious to the din around them.

In the World Financial Center’s shopping arcade, the Platypus furniture store’s sofas were commandeered by the exhausted firefighters; they had shattered the glass doors to get in. Other shops in the World Financial Center bore the marks of the panicked exodus of the day before. Bread dough was abandoned mid-knead on the counter of the Cosí sandwich shop. On the third floor of the American Express Building, half-full paper cups of coffee sat on the tables in a café. In the Winter Garden, a greenhouse of soaring palms and reading chairs and a grand staircase, there was a gaping hole at the east wall that smoked and steamed, and overhead the glass-domed ceiling was pockmarked with pellet shots of debris. The palm trees stood, white with ash.

On Greenwich Street and Park Place, half a block from the rubble of the collapsed 7 World Trade Center, two firefighters slept in the smoky air on couches arranged in a rectangle around a table spilling with snacks and drinks. Someone had attached a scrawled sign to a pole in front of the couches: “Dan’s Cafe Table 4-2. Le Menu 1) 2) 3) cold .”

At the American Express Building triage area, messages were traced on dust-covered windows: “Rescue 2. John Napolitano. I’m here and I love you dad.” “Bravo team was here.” “Lt. John Crisci call home.” “USA lives.” By late night, excavation of the bodies on West Street had become so arduous that the rescuers were forced to pull back and bring in bulldozers and cranes to remove heavier girders from the top of the rubble. They had retrieved few bodies.

The rescuers’ hunt was driven by the tiniest of clues. A firefighter would find a pair of broken glasses: “They’ve got to belong to somebody.” And a group would begin digging on the spot. Often the hunt went simply by scent. “I smell it,” a chief would say. “Gotta be here.” The problem was that the smell of flesh was everywhere.

They dug and probed, working around the crushed hulls of fire engines and ambulances and an E.M.S. truck, all that remained of a triage unit that had been set up below the towers after the first impact-and then was crushed when the towers fell. By midnight, orange body bags were coming out, carried to the refrigerated 18-wheel trucks that served as temporary morgues before the bodies were taken north to Chelsea Piers. The bags were not full.

Just after midnight, the first body of a New York City police officer was found—a blue shirt, a leg twisted under metal. City officers ran to the site, cordoned off the area and stood in silence, digging in groups of four. Police called in the Honor Guard to bring out the body. Officers watched briefly, then left the scene with heavy tearless eyes and returned to work. 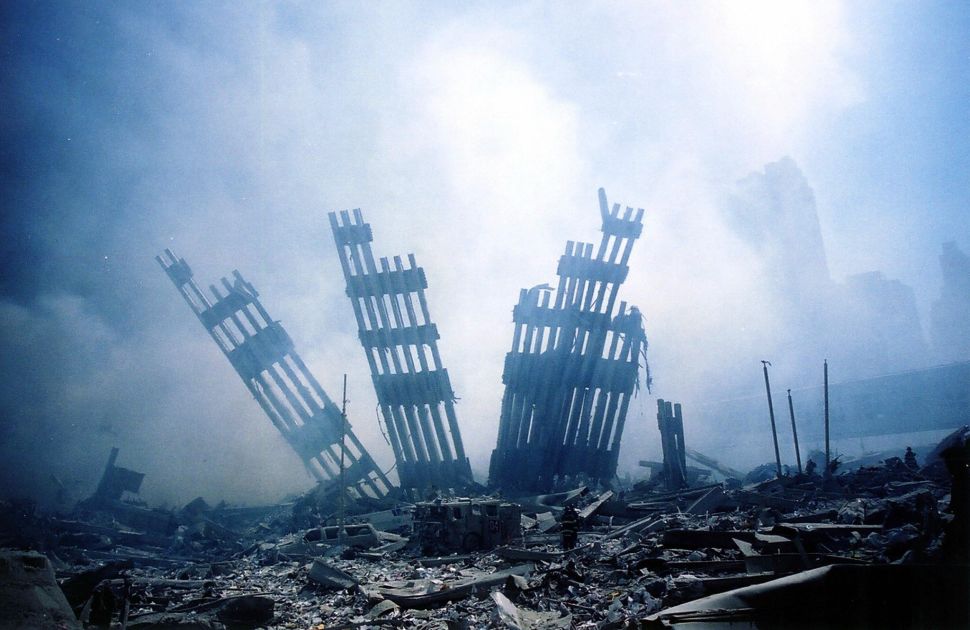