Lehman Brothers managing director John Kasich kicks back in the plush leather chair in his corner office high atop 3 World Financial Center and starts weighing in on his latest investment-banking deal. “It’s a small company in the health-care space,” he says. “Today, we set up a call with the C.E.O. and C.F.O. Tomorrow, I’ll be pitching them with our senior banker in Columbus. It’s a private placement that will lead to an I.P.O. We are down to the eighth or ninth inning.”

In his power blue suit, with a snappy little cell phone attached to his belt, the 49-year-old Mr. Kasich certainly looks like an investment banker. But there’s something about the boom of his voice-a caucus-meeting baritone-and the way he bounds down the hall to shake a reporter’s hand that still reeks of Washington, D.C.

Yes, it is that John Kasich. For a time in the mid-1990’s, the Ohio Congressman was something of a C-Span celebrity-chairman of the House Budget Committee during the Gingrich years, the architect of the 1997 budget agreement that led to today’s budget surplus. For a while there, he was even a blip-albeit a very small one-on the radar of the Republican 2000 Presidential campaign.

Then he kind of disappeared. He did not seek reelection and instead decided to do something besides politics with his life. Now he commutes a few times a month from Columbus, Ohio, where he lives with his wife and twin 20-month-old daughters, and tucks into Lehman Brother’s corner office to talk about mergers and acquisitions in the health-care space.

For a guy who was once Newt Gingrich’s right-hand man and went head-to-head with Bill Clinton on the budget, he admits there’s a certain weirdness to it all.

“Never in my life did I think that I’d be spending time on zero-convert coupon bonds,” he says with a smile. Zero-convert what? “It’s where you don’t want to pay anybody anything, and you get to a certain strike price and they can convert and buy stock.” So don’t mistake Mr. Kasich for a rain-making Vernon Jordan type-happy to swoop into the city for a few power lunches and the discreet phone call or two. He has already passed his Series 7 (the multi-hour test that all in the securities industry must pass), and now, his sleeves rolled up, Mr. Kasich is ready to do some deals.

“A lot of people thought that when I came here, I would be a politician,” he says. “But I wanted to do banking. If you were to look at all the Washington types that came to Wall Street, how many do you think took the Series 7? No one expected this.”

For Mr. Kasich, it all came together quickly. He met Lehman Brothers chairman and chief executive Dick Fuld at the tail end of his Presidential run. His hat was in hand at the time, given the perilous financial state of his campaign, but he and Mr. Fuld hit it off nevertheless. When he finally pulled the plug on his Presidential effort, he started a round of calls to people concerning his next move.

“I had reached the top of the mountain in D.C.,” he said. “And I didn’t want to head down the other side.”

So when Mr. Fuld made him an offer to come to Lehman Brothers, he jumped. “Fuld is an awesome guy,” Mr. Kasich enthuses. “He is the kind of guy you want to go into battle with. He is a great leader. I like people who are really smart and who are great leaders.” It’s been remarked often that Mr. Kasich’s bouncy, almost childlike enthusiasms-he was thrown off the stage at a Grateful Dead Concert, and he and his close friend Gary Condit once jumped into a mosh pit at a Pearl Jam concert-have been something of a double-edged sword for his political career. It gave him a nice common touch (he never lost an election), but when it came time to take his act to the national level, the pundits begin calling for more gravitas.

Mr. Kasich snorts. “The issue was money-M-O-N-E-Y. If I’d had more of that, I would have had all the gravitas”-he fairly spits out the word-“in the world. And you know what? If you look ‘gravitas’ up in the dictionary, it doesn’t exist.”

It does, actually, but no matter: Gravitas has never been a prerequisite for investment-banking success. In the true spirit of the master legislator he once was, Mr. Kasich talks much of relationships, teamwork and the symphonious merging of the two.

Already, he says, his friendship with venture-capital bigwig Mark Kvamme at Sequoia Capital has helped Lehman Brothers’ private-equity team get into a few early-stage portfolio investments. But more than anything, Mr. Kasich just wants to be one of the guys. “When I walk into a room and the bankers start talking about financing, I want to be part of that discussion,” he says earnestly. “The other day I was with a health-care banker, talking about one of our big targets. He was saying the key is financing. I said, ‘True, but we should really think about doing some M&A for them, too.'”

Frank Quattrone he may not be, but this is just the beginning, and Mr. Kasich seems to be enjoying the learning. And his peers at Lehman are duly impressed. “I’m finally calling him a banker now,” chuckles Mr. Kasich’s boss, managing director Gary Weinstein. “He’s got the lingo down; he’s got the drive down. No doubt about it: He has added enormous value.” The son of an outer-Pittsburgh mailman, Mr. Kasich has always been a bit impatient for the next frontier. He escaped the steel-town drudgery of his childhood by attending Ohio State, became a state senator in Columbus, and in 1982 was elected to Congress, where he soon hitched his star to Newt Gingrich and his revolutionary band.

With a savvy eye for the C-Span camera, Mr. Kasich presciently made himself a budget expert and, before it was chic, began extolling the virtues of a balanced budget and fiscal rectitude. As chairman of the House Budget Committee, his timing was perfect: A triangulating President Clinton bought into his patter, and by 1997 a budget deal was done. In 1998, following his reelection, Mr. Kasich turned his eye toward Iowa and New Hampshire. He was God-fearin’ (born again in 1987, after his parents were killed in a car crash), a budget wonk, and willing to grip and grin until the cows came home. Nevertheless, there was a green-eyeshade quality to his campaign, and his voice on the big stage seemed less authoritative than tinny.

Without any money to speak of, he called it quits in July 1999 and was the first Republican candidate to line up behind George W. Bush. Everyone assumed he was angling for a spot on the ticket or perhaps even a Cabinet slot. But Mr. Kasich was ready to move on.

“People have a hard time understanding how someone walks away from politics,” he says. “Frankly, it amazes me. I’m not saying I’m done with it; I’m just not addicted to it.”

Perhaps not. And certainly the story of a politician licking his wounds on Wall Street after a disappointment on the national stage is an old one. Think of Richard Nixon as a corporate lawyer in the mid-1960’s.

Yet, like so many of the others, the move doesn’t exactly make Mr. Kasich a New Yorker. Technically, he works half-time for Lehman, though he says he’s putting in 40-hour weeks talking to other bankers and clients. Working out of Columbus with two assistants, he flies into the city a couple of times a month to meet with New York–based bankers. On his last trip, he stayed in the Soho Grand. “The most exciting thing that I’ve done in the city was having dinner in Little Italy and then walking back on my own to my hotel in Soho,” he said.

Out of the D.C. loop, Mr. Kasich must have a strong view or two about the budget surplus, the hottest political topic in Washington right now. How does it feel to see the surplus you crafted wither away? “I don’t see the future of politics revolving around these issues,” he says. “That’s not how people get elected; that’s not how people lead. I think President Bush is doing a fine job, but I think he needs to take his case to the people. They ought to pay down the debt and preserve Social Security, and that’s about all I have to say about it.”

It certainly does seem that a flame still flickers deep in Mr. Kasich’s belly. He maintains a Columbus-based P.A.C. called the New Century Project and has a gig as a talking head on Fox News, just so people don’t forget him. In 2008, Mr. Kasich thinks he will be tanned, rested and ready, and having done his time on Wall Street-having finally rubbed up close against all those big-money guys-he just might be able to scrape together enough cash to make a meaningful run at it.

“If I can fix my fund-raising problems, I will run again,” he says.

Mr. Weinstein says he will vote for him. And then there’s his new mentor, Mr. Fuld. Bill Clinton had Bob Rubin, Mr. Bush had Donald Marron-could Dick Fuld be his man to shake the Wall Street money tree? “That’s not the way I think about it,” says Mr. Kasich. “Right now, I work for him. I do think, though, that most people here would be happy to see me do well [as a Presidential candidate] again. But it’s not something I run around thinking about.” 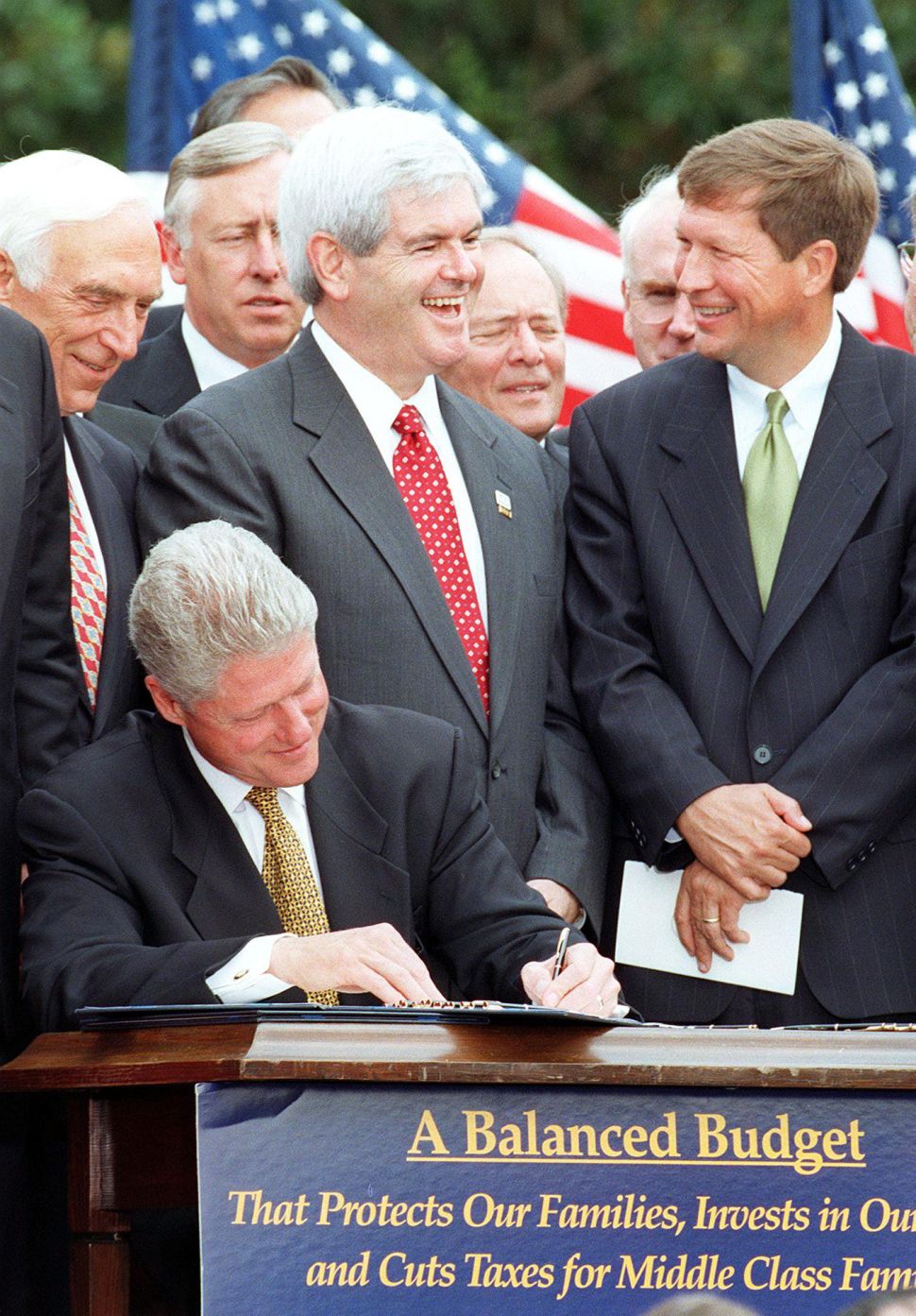