The first issue of Penthouse.

Now, as the quaint world of print pornography quietly shuffles through what many are calling its twilight, I look back fondly to the summer of 1988, the summer that I became Penthouse‘s first (and, at the time, only) intern.

Every morning, my father and I would commute together from suburban Long Island. He’d drop me off at the Penthouse offices on Broadway and then head crosstown to his upstanding job at the United Nations.

My first day, I wore a pressed skirt and blouse, though when I emerged from the elevator into a corridor hung with framed posters of naked Pets on Bob Guccione’s knee, I wondered whether the dress code was nothing at all. The editor in chief looked me over as if I were Snow White fluttering into his den of perversity. I was certain he could discern, with his pornographer’s X-ray vision, that I was still a virgin.

Peter was middle-aged, with dark, thinning hair, though his strongest feature was his teeth, which were incredibly crooked, giving him a kinky menace when he smiled at me. He led me around the narrow banks of cubicles and introduced me to everyone on staff, most of whom were women. (To rationalize their work, they quoted the First Amendment constantly, with the righteous flourish of Bible-thumpers.) Some appeared indifferent to my presence, while others looked me over with concern, as if they were witnessing the conclusion of my wholesome girlhood.

Much of my time was spent reading the slush pile, which was composed of bizarre, poorly written short stories, usually sci-fi, where women’s measurements were more amply described than character or plot line. Then there were the infamous Penthouse Forum letters—the sexual escapades, real or imagined, of “ordinary” men. Hunched over my desk, I found myself more than slightly aroused by my first-time foray into libidinous wordplay. My favorite was the well-endowed lawn boy who, with a few deep thrusts, defrosted the haughty housewife. I also liked the mailman and the lusty ladies on his route who licked his postage stamps (and more). The Forum editor was a smart-talking, gum-chewing, big-haired gal who wore spandex pants nearly every day. She crossed out sentences with red pencil between chortles and burst Bubblicious bubbles. At the other end of the spectrum was the prudish, tight-lipped copy editor who let me proofread every article except the Forum, as if this would preserve my fast-fleeting purity.

Sexual slurs, I soon discovered, occurred offhandedly between coworkers; no one seemed to realize how deeply the magazine’s content had invaded our psyches. After one of his martini lunches, the editor in chief stumbled over to my cubicle and slurred, “Can I come into your box?” “Sure,” I breathed, testing my burgeoning sexuality, “come.” Later in the week, he gave me Susan Minot’s story collection, Lust and Other Stories, as a gift. I smiled sweetly—this innocence of mine, I noted almost immediately, had a certain cachet around the Penthouse offices. My virginity was palpable; it was as strange and rare as a near-extinct animal and seemed to leave everyone wracked with ambivalence on whether to preserve it or kill it. Holding Lust to my chest, I told Peter that I would read it.

Naturally, in this heightened atmosphere, I developed a crush on a co-worker. He was the mildest, most befuddled man in the office: Bob, the managing editor. I dreamed about him incessantly, imagining us in a variety of uncomfortable poses, usually involving his desk, the sharp edges of which poked with painful pleasure into my hips. Bob had worked at Penthouse for years, though he was still clearly uneasy with the magazine’s content. When I would knock on his door to tell him that his mother or fiancée was on the phone, a centerfold inevitably lay splayed across his desk. Bob checked each photo for splotches and inconsistencies, but when our eyes would meet, his face reddened with shame. My crush was inevitably short-lived: I turned the page on Bob, as I had the numerous steamy scenarios in the magazine.

I brought the July issue home to show my parents. My mother passed over the centerfold with a nod, though her face revealed an expression of pure disgust. Clearly, until now, she’d been unaware of the magazine’s actual content. Skimming the pages, she described what she saw there as “naughty,” as if Penthouse were a disobedient child that needed her punishing. Flipping to the back, she settled on a sobering article of some sort. “Look how thick it is,” my father piped in, adding, “A lot of advertising this month.” I chuckled at my father’s slip of the tongue, which my mother seemed not to have noticed.

After dinner, I stashed the magazine under my bed. Penthouse deserved a dark, dusty and secretive space, despite my parents’ peculiar acceptance of porn. Every night, I opened it wide to the center, exposing the three metal staples securing the pages. The Pets, with their perfectly feathered hair, seemed to coo in silent ecstasy, their parted lips revealing a bit of tooth or tongue. Their nails were long and perfectly painted, unlike my own bitten-down stubs that ran over the magazine’s cool gloss, smudging the pages. Their breasts seemed inflated, like balloons near bursting, and their pudenda were swollen and shaved to a thin swatch of heart-shaped fuzz. I was both disgusted and fascinated by this pornographic perfection. I attempted to mirror their droopy bedroom eyes and parted lips before I went to sleep in my twin bed.

At work, during my lunch hour, I began to paint my nails—”Lickety Split” and “Transpire,” my colors of choice. I knew the feminists at my college went righteously unshaven and would consider me a traitor for picking up a razor, but I didn’t care. I shaved, reasoning that their bookish beliefs weren’t nearly as exhilarating as my smooth skin, which I groomed in preparation for the impending plucking of my petals.

On my last day at Penthouse , the editor in chief gave me a good-bye gift: an oval abalone pin set in silver that I still have but never wear. “Here,” he said, “let me put it on for you.” As he sent the sharp pin through my blouse, I felt a small stinging prick as it hit my skin and a pleasurable quiver as he rested his hand on my chest. I smiled demurely back at him. My innocence by then had an ironic, knowing edge. Later, when I took off my blouse, I saw that Peter’s pinprick had drawn a small dollop of blood—not exactly the stimulating stuff of a Forum letter, but, I figured, it was a start. 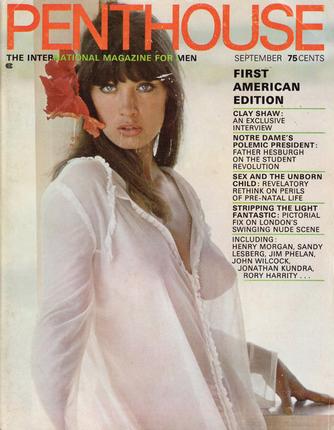