Scrappy newsman had inside track since kindergarten, almost quits Harvard to work for Rupert, Mom says no! Gets gig anyhow at 27!

It was a Thursday night in June 2001 when New York Post editor in chief Col Allan asked a young editor on his staff to come out for a drink. The next day was to become known at the Post as the “Friday-morning massacre,” when Mr. Allan-who had just been brought to town from Australia to remake the tabloid daily-fired five senior staffers, including columnist Jack Newfield and Stu Marques, managing editor for news.

Mr. Angelo said he was “gobsmacked” by the meeting. He never thought he’d get this kind of chance-not this soon, anyway. And these people-the ones who were being fired-were colleagues, even friends. He told Mr. Allan he’d think about the offer, but he knew he was going to take it.

“There was no way I was going to say no to it,” Mr. Angelo said.

The next day, before leaving the newsroom for good, Mr. Marques pulled Mr. Angelo aside and gestured to the noisy warren of cubicles that is the Post’s newsroom.

“You take care of them,” Mr. Marques said.

“That had a big impact on me,” Mr. Angelo said. “There’s a difference between getting good stories-and breaking news and putting out good front-page pieces and selling newspapers-and having to look out for people, to make sure they have what they need to live a good life. That’s what I try really hard to do. It’s not an easy thing.”

Today, Mr. Angelo, now 30, is an essential part of the team brought in by publisher Lachlan Murdoch to do one thing: surpass the Daily News in circulation and make the Post the best-read tabloid in New York. With six consecutive quarters of 10 percent circulation growth, things are looking pretty good for Mr. Murdoch and Mr. Angelo.

Research showed the paper was considered too conservative by some readers, so the new Post ran local stories-the kind of pieces that don’t easily divide the readership over political sensibilities-and saw impressive gains. Mr. Angelo’s instinct for local news has been a big part of it. “He’s just a very smart young guy,” Mr. Allan said. “I was impressed with his confidence and his ability to lead a conversation and to motivate people.”

Mr. Allan said the decision to elevate Mr. Angelo was his, not the Murdochs’-even though Mr. Angelo’s life and career have been tied to the Australian clan since kindergarten, when Mr. Angelo first met James Murdoch, the younger of Rupert Murdoch’s two sons, at the Trinity School in Manhattan.

Best friends since then, they both went on to Harvard, where, during his sophomore year in 1993, a restless, bored Mr. Angelo wrote to Rupert “begging” him for a job. The one he got was at Mr. Murdoch’s splashy London tabloid, The Sun. Fetching coffee to start, he began reporting and then one day called his mother to tell her that he didn’t want to go back to school. This is where he wanted to be, where he’d have his real education.

“It was the only time I heard my mother curse at me,” Mr. Angelo recalled. “She said, ‘You got into Harvard-you’re going to get your fucking degree!'”

So he did. But he was back in the Murdoch fold soon enough, working under Mr. Allan at The Daily Telegraph in Sydney, where he stayed for two and a half years. There he reported from the general-assignment desk, covering “crime, death, disaster, murders … the fun stuff.”

When Mr. Angelo returned to his hometown of New York-he’s a native Upper West Sider-he had no job and ended up screwing around for a couple of months before the call came. The New York Post wouldn’t hire him as a reporter, but he soon parlayed freelance work at Page Six into a full-time job just the same.

“It takes more than one ‘no’ to deter me,” he said. Once in-house, Mr. Angelo did time on the Sunday paper, then spent a year covering Wall Street. He was one year into his job at the business section when Mr. Allan tapped him for his current gig.

It was hard at first: a young man-a shrimp with less than a decade of experience-directing people in their 50’s and 60’s. But Mr. Angelo said both sides have made it work. And Mr. Allan seems pleased.

Asked about the chatter that he will someday replace Mr. Allan, Mr. Angelo would only repeat the company mantra: “I don’t think about things like that,” he said. “Right now we’re focused on beating the Daily News.”

His boss, however, seemed a bit more willing to take that look forward.

“Jesse will determine where Jesse goes,” Mr. Allan said. “He will decide that. He’s not going to be looking for handouts anywhere.” 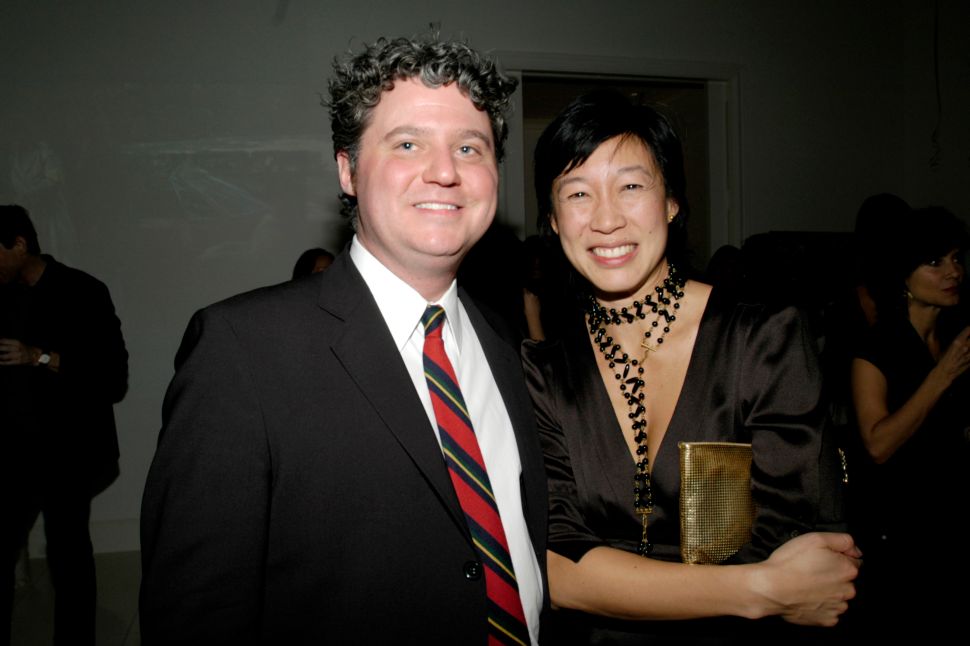