The Transom has actually come full-circle to love the recent work of Alex Kuczynski; she writes a weekly column called The Critical Shopper in the Thursday Style section of the New York Times. In her eight months on the job, she’s trashed Sofia Coppola’s films, made fun of women who lunch without eating, questioned vast income disparities in Manhattan, and generally been a total loose cannon.

And since the birth of the column in April, 2005, the blonde bombshell, who is the daugher of Peru’s Prime Minister and the spouse of mega-investor Charles Stevenson, has spent in the course of her duties aproximately $25,000 dollars in self-reported sales.

Not including—at the very least—four confirmed sale items whose prices were not given in print, the minimum amount of money spent by the Critical Shopper since April, 2005 is $23,706.95.

5/5 Hermes
Sale unclear: May have purchased a Plume Birkin at $4900. (Also confessed to owning 12 Hermes scarves.)

5/26 Woodbury Common
“A brilliant green floor-length [Dolce & Gabbana] dress in stretchy duchess satin, originally $2,400 and on sale for $975 […] A small handbag in black grosgrain with bamboo handles was $339. At Diane Von Furstenberg, there were racks of the vintage wrap dresses at 50 percent off. I bought one for me and one for my mother. […] There was a jacket in whisper-thin denim. And it was practically free. […] There they were: Delman black suede sandals with a wedge heel. At $110….”

6/9 Roberta Freymann
No reported sale: “I went a little crazy on my first visit.” Extent of crazy-damage unkown.

6/16 New York Golf Center
“I chose Callaway irons ($599.99 on sale), putting them on hold, and bought a Cobra driver, which was not on sale and cost $297. A lightweight golf bag in canvas was $99. […] I skipped the studded [Jamie Sadock] pieces with zippers but bought the black skirt with silver buckles.”

7/7 Ruehl
No reported sale. Store so dark that “I can safely say that even I could have cleaned this place out in a few minutes.”

7/21 Target
A “Mint Mocha Chip Frappuccino for $4.90 (for the venti), without tax.” More corporeal purchases include a “large mirror to hang on a guest bedroom wall and six other smaller ones for around the house; a leather lamp; a silk lampshade; two pairs of hiking shorts, a pair of Mossimo camouflage pants and three pairs of underwear for my stepson; seven pairs of underwear and a pair of Hello Kitty flip-flops for my stepdaughter; Mossimo blue jeans for me; 20 sturdy wooden hangers; a box of Ritz Bitz cheese crackers, half of which I ate in the parking lot and the rest of which I threw into the garbage before I could eat any more; a copy of People magazine; a bottle of . The bill was $234.42.”

8/4 Jacob & Co.
No reported sale. Tried on the million-dollar watch, though.

8/11 Kitson
“I eventually bought a pair of high-heeled pink suede Fornarina pumps for $125….”

8/18 Marc Jacobs
“I did buy a Venetia satchel, at $975, in taupe with a bright pink suede lining, as a long overdue thank-you present for a friend.”

9/1 J. Crew
“I thought the sequined ribbon belts were overpriced at $58, but I bought one anyway. Along with the Lauren Bacall sweater [$198] and a cashmere sweater in bright blue. [$138]”

9/8 Dolce & Gabbana (Manhasset)
“Most entrancing was a white and gold cocktail dress with rhinestone details and a matching knee-length jacket…. At $4,700 it was a bargain…. I paused. Swooned. Perspective time. The top fifth of earners in Manhattan now make 52 times what the lowest fifth make: $365,826 compared with $7,047.”

9/15 The Brownstone
“I was busy buying a pink shawl from Guatemala, $55, and a Vietnamese purse latticed with black beads and mother of pearl, $35….”

10/6 Uniqlo
No reported sale: cashmere not as soft as Hermes.

10/13 QVC
“By Day 5 I buckled and ordered a George Foreman grill. Not just a grill, mind you, but a grill with a bun warmer.” [Price unknown: probably between 19 and 39 dollars.]

10/20 Rugby
“I purchased a ribbon belt festooned with skulls and crossbones for my husband, to add some pizazz to his golf outfits. (It was on sale for $24.99.)”

10/27 Burton’s
No reported sale: Disturbed by the 420 Kit that seemed to endorse pot-smoking.

11/10 Calypso Home
“I bought one lucky recipient on my list a rich-looking horn and silver tray for $250. I also bought a set of linen hand towels embroidered with koi fish, on sale for $22…. [and] the antique Indian reverse-glass portrait of a three-faced man for $700”

LF Stores
“Purchases this year include my Penny Loves Kenny gold cowboy boots for $160 and a cuff bracelet of Andean opals for $85.”

12/8 Abercrombie and Fitch
No reported sale: too loud. 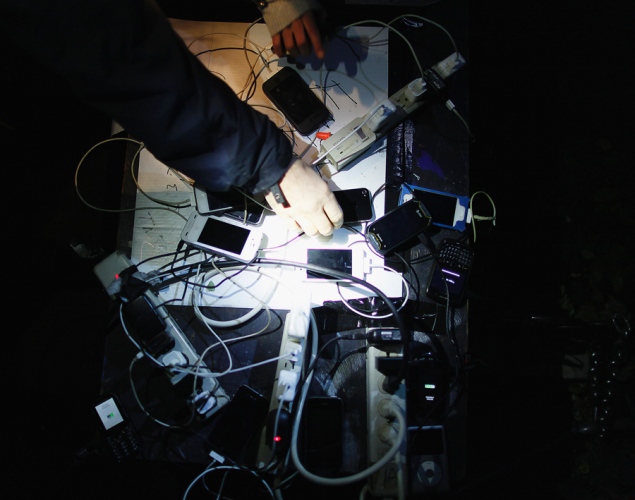