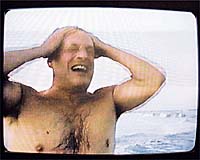 Over at the McSweeney’s mag, they’re shilling a new, quarterly DVD compendium of short films, titled — most bewilderingly — Wholphin.

Ordinarily, this would not concern the Politicker. But issue No. 1 includes the “lost” 13-minute Al Gore documentary by Spike Jonze, the director who brought us everything from Being John Malkovitch (1999) to an endearing Ikea lamp commercial. Though the Gore film aired at the 2000 DNC, Dems never pushed it to a broader audience. To this day, nostalgics argue that it offered a (wasted) chance to shake Gore’s wooden image…and the DVD release seems to have revived some interest in that line of thinking.

Ice-breaker or time-waster? If you didn’t have an opinion on the film six years ago, you can watch it and have one now.

[If you have a link to a version of the film that’s larger than, say, a largish postage stamp, please pass it along! Though I found it viewable at this size, it’s not for the beady-eyed or squinty among you.]