“Not to compare myself to Simone de Beauvoir—who is, you know, this vast intellectual heroine—but I remember reading something that she said about when The Second Sex came out in France, and that she just was mocked to death,” said the author, professor, former video artist and feminist pundit Laura Kipnis.

It was the eve of the publication of her new book, The Female Thing: Dirt, Sex, Envy, Vulnerability, and Ms. Kipnis, who said she’s in her “late 40’s,” seemed a tiny bit nervous about how graciously she, and it, would be received. Ms. Kipnis called the book, which critiques women’s conflicted obsessions with cleanliness, romantic love, orgasms and rape, an “update on the topography of the female psyche.” She described the tone of some early reviews with that dreaded word: “mocking.”

“I’m curious to know if that will persist, and if writing about femininity actually will end up being my intellectual downfall and I’ll never be taken seriously again,” she said, looking austere at the Noho Star cafe for breakfast on Sept. 29. She was dressed for urban combat—or perhaps for battles of a cerebral nature—in a black sweater and pants, her white, almost translucent skin and angular features brought out by pink lipstick and smoky eyeliner. On her feet were tweed wedges with maribou poufs on the toes.

“You know, I think it’s not an unaggressive book, actually,” she continued in her elongated Midwestern drawl, an anxious furrow appearing between her eyes. “And I think any amount of aggression you put out in the world comes back to you.” Although that’s obviously something she seeks out: “I’m maybe playing a bit of a provocateur role,” she said. She took a bite of toast.

Ms. Kipnis, who teaches film production at Northwestern University, is not incorrect in thinking that the media needs more sharp, intelligent female writing. Instead, the proliferation of self-indulgent essays—retro first-person tales of dating, wedding-planning and baby-making—seem to do more for the author than the reader. Both the television and print worlds are crowded with self-important boys fighting amongst themselves, but there’s no Simone, Susan Sontag or even a kooky new Camille Paglia on the horizon. The literary landscape is as uninspiring as a girl’s credit-card balance after a Jimmy Choo sample sale—as Ms. Kipnis herself might write in her self-consciously irreverent voice.

“I did think what was missing was an element of honesty,” said Ms. Kipnis, who criticizes the work of Maureen Dowd, Caitlin Flanagan and Eve Ensler, not to mention most feminist academics and theorists (she does admire Barbara Ehrenreich). She refers to much of what goes on as “you go, girl” culture: “It’s a whole men-are-dogs, men-are-untrustworthy kind of advice literature which acts as if men are de facto emotional incompetents, and women are the ones with the soul and the depth and the emotional awareness,” she said, adding that women need to look inward to find the source of many of their problems. “It does seem so smug.”

LAURA KIPNIS GREW UP IN, and now lives in, Chicago, but she’s openly ambitious about her desire to settle permanently in New York (“It’s fucking freezing there,” she said, among other things, about the Windy City).

She attended art school in San Francisco, became known as a video artist and then went on to publish articles in academic journals, which led to university teaching gigs in Madison and Michigan, as well as at New York University in 2002 and 2003. (Ms. Kipnis holds the title of professor at Northwestern without the coveted credential of a Ph.D.)

After publishing books in the academic world—Bound and Gagged: Pornography and the Politics of Fantasy in America and Ecstasy Unlimited: On Sex, Capital, Gender & Aesthetics—she made her mainstream debut with Against Love: A Polemic, a sassy book-length essay arguing that marriage and monogamy are suffocating and unnatural (“domestic gulags,” in her parlance), which was published in 2003. People—men in particular—seemed intrigued by a single-woman author who made a passionate case for adultery (although she said that she was once in a stable 12-year relationship and isn’t anti-marriage). The book was widely, and for the most part enthusiastically, reviewed.

“I was kind of amazed with that book,” Ms. Kipnis said, marveling at how “intellectually seriously” it was treated. “I thought that it would be polarizing, and I thought there would be some real bashing, but as far as I know, the reviews were just entirely … kinda celebratory and positive to an extent that just … surprised me.”

Most of Ms. Kipnis’ newest book was written in New York, in an apartment she owns in Chelsea, while she was on a two-year leave from Northwestern. When she’s in town, she hangs out with, among others, Ms. O’Rourke, as well as the New Yorker writer Rebecca Mead and her husband. (Ms. Mead reviewed Against Love for The New Yorker and the two struck up a friendship.) In fact, Ms. Mead’s home was the setting of at least one of the dinner parties mentioned in the book, in which Ms. Kipnis described an “attractive successful single professional female in her mid- to late thirties” who was ranting at the table about what wimps most men are. Ms. Mead said that Ms. Kipnis is “excellent” to have at a dinner party.

“She can always defend herself and argue with people who aren’t necessarily used to being taken on,” Ms. Mead said. “And she’s always game. So I don’t think she’s ever declined an invitation.”

The dinner-party anecdote was meant to illustrate what seems to be Ms. Kipnis’ central point: that women have mixed feelings about their own emancipation. “[B]eing female at this point in history is an especially conflicted enterprise,” she writes sagely in the “Envy” section, “like Birkenstocks with Chanel, or trying to frown after a Botox injection.”

The 160-page riff that ensues is decidedly less focused than Against Love. Ms. Kipnis divides the female psyche into four quadrants (the “dirt,” “sex,” “envy” and “vulnerability” of the title), and within them covers sexual satisfaction (“orgasms have become an index of female progress”), housework (“it’s unclear whether the real domestic problem between the sexes is that men won’t clean or that women will”), rape (“It may come as a surprise to hear that as many men as women are probably raped [in prison] every year in the United States, and possibly more”) and women’s general love-hate attitude towards men. Freud makes an appearance on page 11, Naomi Wolf on page 145, with Nietzsche somewhere in between.

She pointedly avoids giving any sort of advice, which many women have probably come to expect from their fellow women. When asked what she hoped to accomplish with The Female Thing over breakfast, Ms. Kipnis paused.

“I think my ambition is to—I don’t know how this is gonna sound—but for the world to be a bit more interesting than it is,” Ms. Kipnis said. “So I’m … trying to contribute to making these conversations feel a little more interesting. And also, on a personal level, just kinda have fun.”

A COUPLE OF WEEKS LATER, Ms. Kipnis was party to a conversation with a very different tenor. She was the guest of honor at a seminar held at Columbia University to discuss the “Dirt” chapter of The Female Thing. A group of students, many likely from women’s studies (several bandanas and unshaved armpits were in attendance), and a handful of professors gathered around a conference table in a fluorescent-lit basement room. The whole exercise served as a potent reminder of both the perils and the luxuries of academic life.

One of those present, an older woman with short hair and spectacles, was squirming in her seat.

“I still don’t know what this book is about,” she harrumphed, furiously chewing her gum.

Ms. Kipnis swept in and took her place at the end of the table. After a heady introduction by one of the grad students, she explained that “femininity and feminism are in incessant conflict” with one another. She read several passages from the book’s preface aloud (“when it comes to the female situation, contradictions speckle the landscape, like ingrown hairs after a bad bikini wax,” etc.). While she spoke, her lips pursed into a perfect “O” shape that jutted out in front of her face.

“I loved reading this—it was so much fun, I felt like I was cheating,” gushed one young woman when Ms. Kipnis finished reading.

The conversation hopscotched around the table, covering questions of who Ms. Kipnis was hoping to reach with her book (“both academics and readers of Time magazine,” she said); the link between housework and pornography; the question of whether there is a “female propensity to masochism”; and the inevitable theme of ladies’ anatomy: “I kept coming back to the vagina,” Ms. Kipnis declared at one point, by way of explaining why women behave the way they do. “No matter how you get into the theory, it does come back to the fact that you have a vagina. It sounds stupid to say it …. ”

There was heated talk of “cross-cultural claims” and “transformational possibilities,” “social constructionism” and “materiality.” One of the three men in the room piped in that he had had “some impatience with the straight constructionist line” in the excerpt.

Ms. Kipnis seemed to be rather enjoying the friendly banter, until someone put forth a question that demonstrated that even an edgy, feminist contrarian has her limits. A man with a shaggy white mustache gathered the sheaf of papers spread out on the table in front of him with the efficiency of a government bureaucrat.

“I found it interesting that there was no reference at all to oral sex,” the man began. “Feel-ah-shee-o or coo-ne-linguis raises all sorts of issues that you might have discussed—heh, heh! My sense is that feel-ah-shee-o occurs more and is expected more than coo-ne-linguis.”

Ms. Kipnis was staring at him, and somewhere somebody let out a giggle.

“Do you think that oral sex has any role in this discussion?” the man said.

It was a fair point, but Ms. Kipnis was having none of it. 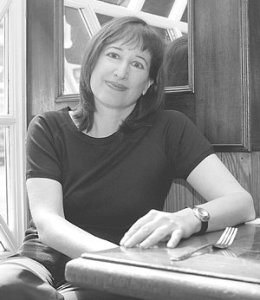