TOMS RIVER – Just inland from where the barrier island takes the brunt of the sea, the Ocean County Republican Party consented to another element here at their convention on Thursday in the case of State Sen. Leonard T. Connors, Jr. But while the time element saddened the long-serving senator’s supporters, they said they could find no better successor to the aging Connors than his son, Assemblyman Christopher J. Connors. "Len is going to be missed, but Chris is a chip off the old block," said Bob Butler of Tuckerton. Connors, who wants to step up to claim the seat vacated by his retiring father, will lead a 9th district Legislative ticket that also includes Assemblyman Brian E. Rumpf and Ocean Township Mayor Dan Van Pelt, who is running for the seat Assemblyman Connors will give up to run for Senate. The ticket is a virtual lock. This county is a Republican stronghold that in the 2004 Election voted for President George W. Bush over Sen. John Kerry by a margin of 60 to 39 percent, and where the buzz on Thursday was all Rudy Giuliani.

"Anyone but that woman, what's her name?" said Katherine Guida of Toms River.

"Right, anyone but her," said Guida. "Giuliani."

The convention proved no dragged out affair. There were no surprises, no last minute rebel challenges to the candidates in districts 9, 10 and 30, who received the convention’s unanimous support. People were in their seats at 6 PM., applauding for the candidates by 6:30 PM., and out the door by 7 PM.

"The message here at this convention is Republican unity in Ocean County – the voice of sanity in a state that seems to be going crazy," said Rumpf. "The mission is to continue to bring good government to the people through all of our elected officials.” It was mostly an older crowd.

"I think the main issues are property taxes and state aid,” said Bob Martino of Berkeley Township. “We need more state aid directed to the so-called middle income communities, who are paying taxes that are ridiculously high."

Carmen Amato, a Berkeley Councilman who had challenged Van Pelt for the Assembly nod at a party screening committee two weeks ago, likewise cited property taxes as the main issue — and ethics reform.

"The Democrats have been in Trenton for years and they haven't done anything to address ethics reform," Amato said. "We need to change the culture of corruption, and change business as usual.

The GOP candidates’ strategy going forward is to continue to champion tax cuts, achievable, they say, through budget spending cuts.

"Until you cut expenses, you can give tax cuts all day long," said State Sen. Andrew R. Ciesla, who is seeking a sixth term in the District 10. "We need across the board cuts to streamline government."

He said certainly he wants to eyeball the Abbot School districts and attempt to rein in spending. “When 31 school districts are receiving 56 percent of state aid, it’s time to re-evaluate,” said the State Senate candidate. Then it’s all of the little things: one bill heaped on top of another that all add up to a bonfire of inanities, in his estimation.

Connors said the Democrats want $10 million to create a comptroller’s office; a good idea, he admits, if the right bill had been passed, but the legislative process yielded a job description so weak, Connors doubts the comptroller will do any good. “That’s $10 million wasted,” he said.

He forecasts the state’s effort to move up in the Presidential primary process will be another bust, because New Jersey stands to be simply be one of a number of states with a primary on the same day €” hardly a bold, influential position for the state’s primary voters, in his view. “That’s another $10 million wasted,” he said. There’s a pilot program for three municipalities to receive public funding for elections – another waste, Connors said, at $7.2 million. “You’re talking about more taxes to fund legislative campaigns,” he said. “At some point, we have to say the state cannot afford to do all of this stuff."

Connors says he’s heartened by the addition to the ticket of Van Pelt, whom he says has served a town that is really a microcosm of District 9, with age-restricted communities, mixed communities, and hard-working middle class families seeking relief.

As for his father's imminent retirement, "I'm saddened by his decision not to seek re-election,” Connors said. “We’ve been a great team for 17 and a half years. His unique presence will be sorely missed, but his values and principles are things we will hold closely. People have expressed their appreciation for his leadership, which will continue through me.” 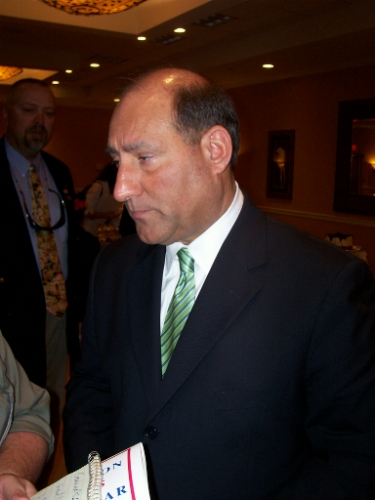