Moving at an extraordinary speed (it’s almost as if he already had already given a Senate campaign some thought), Kevin O’Toole has emerged as the clear front runner in his bid for Hank McNamara’s State Senate seat. He has announced his running mates — incumbent David Russo and Wayne Mayor Scott Rumana — and has lined up endorsements from party leaders. Since he is the Essex County GOP Chairman and Rumana has the same job in Passaic, those two counties will award the ticket their organization lines. They will still need to compete at the Bergen County Republican Convention, but most GOP insiders say they will be tough to beat. The only obstacle to O’Toole’s return to the Senate, where he served for several months seven years ago, is the Republican primary; Northwestern Bergen County has not supported Democratic Assembly candidates since 1965. Two candidates are reportedly mulling Senate bids: former Freeholder Todd Caliguire, once a top aide to Governor Thomas Kean who ran as a conservative for Governor in 2005 and for Bergen County Executive in 2006; and Douglas Doyle, a Wyckoff attorney whose law partner is Caliguire’s mentor, former state Attorney General (and 40th district Assemblyman) Cary Edwards.

Look for John Ginty, a Ridgewood conservative who challenged Thomas Kean, Jr. in the 2006 Republican U.S. Senate primary, to seek an Assembly seat on Caliguire’s line.

One potential problem for Caliguire: his '06 bid to unseat Bergen County Executive Dennis McNerney was picked by PoliticsNJ.com as the worst campaign in New Jersey last year.

There are unconfirmed reports that former State Senator Norman Robertson, who lost his seat in 2001 after redistricting extended his GOP territory into East Orange, might be interested in running for the Legislature. He now lives in Wayne.

Running off the line is not necessarily an impossible task, given the relative weaknesses of the county GOP organizations in the district. Challengers would have to recruit Freeholder candidates — something Bergen and Passaic County Republicans are already finding exceptionally difficult. 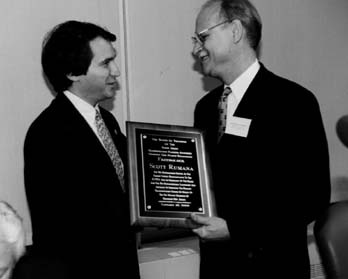