Studying international relations in Warsaw, Damian Bednarz says he took it on the chin over there on the issue of American Presidential politics, particularly when it came to the Bush and Clinton families.

“This one guy told me, €˜I thought you people threw out your kings in the revolution,'” Bednarz recalls. “€˜Now you’re having it out between two families.'”

It was in part a reaction to the seeming Bush-Clinton strangulation hold on the presidency that drove Bednarz into the arms of Barack Obama.

Mostly, he says, it was the independent appeal of the freshman Senator from Illinois himself.

“Obama has something that Hillary Clinton can’t buy or reproduce, and that’s a sense of inspiration,” Bednarz says.

Bednarz, a 25-year-old international relations major at Seton Hall University’s Whitehead School of Diplomacy and International Relations, knows he and New Jersey for Obama, the unofficial, grassroots campaign organization he runs, face a daunting challenge. With less than a year to go before the Democratic Primary here, Sen. Hillary Rodham Clinton is dominating New Jersey the same way Rudy Giuliani appears to own Jersey for the Republicans.

He claims the perception that Clinton is the money candidate and the sure-bet darling of the Northeast establishment means over the next months she won’t have the grassroots organizing in Jersey that Bednarz says he’s steadily building, one county at a time
.
“If anything I’m encouraged by that [Clinton’s front-runner status] because I know our work is so special,” says Bednarz, who first sat down three months ago to talk with other prospective Obama-backers in a coffee shop in Edison.

He now says he has the campaign’s infrastructure well-organized in more than eight counties, and his best infrastructure is in some of the state’s urban areas: Middlesex, Essex, Hudson and Bergen. He says he’s also building successfully in Ocean, Morris and Somerset.

Julia Diaz, a 36-year old mortgage broker from Perth Amboy was one of the people who showed up at that first meeting. She says she was impressed with Obama when he made his famous speech at the 2004 Democratic Convention.

“I voted before, but I never got involved,” says Diaz. “I think Obama’s different than the regular old, stale politics everyone’s used to. He’s a cross-over presidential candidate with bipartisan, inter-generational and multi-cultural appeal.”

Diaz agrees with Bednarz that Clinton just doesn't have the spark to ignite the Democratic Party and win in a general election.

“She reminds me of old school politics,” she says.

Nick Sheehan describes himself as a 24-year old recent college graduate and Internet-head. He’s Bednarz’s captain in Essex County, and another believer in the Obama mystique.

“There’s a lot of intense Hillary-hatred, and dismissal of [Sen. John] Edwards as a pretty boy,’ says Sheehan. “I prefer to focus on the positive of what Obama offers, and to me the fact that he was a community organizer in Chicago means a lot. That’s a unique experience that gives him a connection to communities, specifically urban American communities that I think a lot of politicians have lost; certainly that this administration has lost.”

Down on the ground is where the organizers say they’re going to have to go for support, and if they can’t get senators, they’ll settle for mayors.

At a North ward political function last week, Newark Mayor Cory Booker invoked Obama in his speech on behalf of the 29th district Legislative ticket he is backing with other Essex County leaders.

Booker likened the mixed-race slate of young candidates to what Obama calls “the Joshua Generation.”

It’s a reference to the Book of Exodus, when Joshua must take charge of a nomadic people after Moses dies. Dr. Martin Luther King, Jr. and U.S. Congressman John Lewis — who was beaten at the Edmund Pettus Bridge in Selma, Alabama at the height of the Civil Rights Movement — were the Moses-figures of their generation, Obama told a congregation in Selma last month.

Now, he says the Joshuas must carry on.

“We recognize we have an uphill climb being in Sen. Clinton’s backyard,” says Keith Hovey, a 30-year=old attorney and the group’s point man in Somerset County. “That means we have to have a different approach. We’re not going to get the Corzines, Lautenbergs and Menendezes to jump on this campaign. We have to go after the everyday voter.” 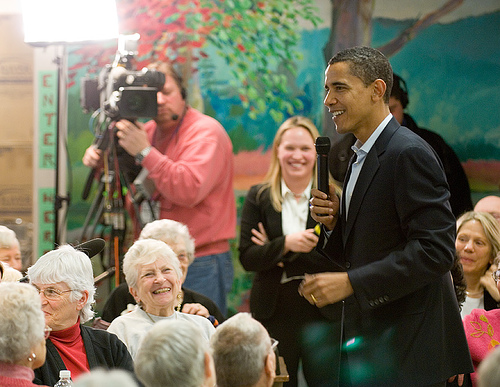