Angelo Genova is intimidating in cross-examination.

When he asked the nervous clerk from the state Division of Elections Office whether or not she would certify the petitions again were she to review them "sitting here today," she stammered, "No."

Judge Joseph Paone released the tension in the courtroom with a joke.

"Because you don't want to sit here again," he told her with a smile and she smiled back, relieved.

The judge repeatedly interrupted both attorneys during their closing statements, trying to get them to refine their respective arguments – and hitting them where he thought they were stretching the facts. When Stephen Edelstein said everyone — "clerks, candidates, voters” — knew Sandra Cunningham was running as a Democrat in the primary and not the general election, Paone pursued clarity.

"The documents reviewed by the clerks do not have the same language as the documents reviewed by the voters," he told Edelstein. "The word 'Democrat' didn't appear on any. The words 'Hudson County Democratic Organization' appeared on some. No one said that language was there and represented t the signatories. I don't know if I can mke an inference that language was there before the petitions were filed."

When Genova said in his closer that Cunningham's petitions were rejects, the judge corrected: "But for your challenge, they would have been certified."

In the end, the judge turned to a representative witness from the Attorney General's Office and appeared to be feeling her out for her reaction to the case. She continually rebuffed him, finally telling him it's his decision to make. Paone also probed the lawyers to determine what he could do statutorily, and then announced he would be making his decision by the afternoon of the following day.

The judge is younger than the two old pros that went in front of him Wednesday. He obviously paid attention to their expertise, and respected them enough to keep a fairly low profile throughout. There were no blistering exchanges with either lawyer. He gave them leeway. He stayed out of the fray as much as possible. He ignored the jeers and cheers from the crowd. But no one ever got out of hand. He kept order.

But Paone clearly seemed to enjoy watching Genova, who argued five years ago that the court should ignore the picayune details of state election law when he wanted to Frank Lautenberg for Bob Torricelli in the 2002 U.S. Senate race.

At one point, Paone commented on the irony of Genova’s ability to seek refuge in the precedent of another case to make one point, and then reject the argument to make another. He called Genova on it.

And when it comes to the 2002 U.S. Senate race and Genova’s call for administrative feasibility and voter choice, Paone may have some first-hand knowledge: that year, Paone, a lawyer from Woodbridge, was the Republican candidate for Middlesex County Freeholder.

Max Pizarro contributed to this story 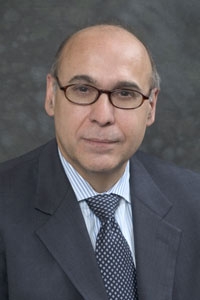