HACKENSACK – A feud between the Bergen County Democratic Organization and a popular State Senator has come to an end.

"I wasn’t going to say it, but Cinderella did come to the ball finally," State Sen. Loretta Weinberg told a crowd of reporters, onlookers and party spear carriers in the Hackensack headquarters of the Bergen County Democratic Party.

It was a metaphor Chairman Joseph Ferriero delighted in embellishing, as the pair announced they would be reconciling after a Rizzo-Kenickie-like brawl that had seen Weinberg bucking the party hard for at least the last two and a half years.

In the wilderness, Weinberg always had a key ally in Corzine, who backed the rebel legislator’s successful bid for Senate in 2005. The move riled Ferriero and the county establishment, and the ongoing civil war was on the verge of another big cymbal clash this primary season, with battle lines drawn between Ferriero’s candidates – Englewood Mayor Michael Wildes, former Assemblyman Charles "Ken" Zisa and Cid Wilson; and the Weinberg faction.

The standoff was diffused when after several weeks of talks, the chairman officially retired his slate today and said they would all support Weinberg and her running mates – Assemblywoman Valerie Huttle and Assemblyman Gordon Johnson – in return for support in battling Republicans in the neighboring 39th district.

"We’re a family," Ferriero told the crowd. ""From time to time we have family fights."

The principals were expending too much time and energy in a civil dispute. Intensified over the course of a primary, it would only weaken the party, Ferriero and Weinberg said.

Instead of fighting Democrat against Democrat, they said, the goal should be to defeat Republicans.

No primary in the 37th means more cash for the Democratic Committee to arm Senate candidate Joseph Ariyan and Assembly candidates Carl Manna and Esther Fletcher against veteran Republican legislators in the neighboring 29th district.

The designation of the 37th as a clean elections district plays to the Democrats’ advantage in Bergen, as they can humbly accept limits placed on outside campaign contributions in a basically noncompetitive 37th district, while dumping truckloads of money into the 39th — where they see an opportunity to strike.

Assemblyman John Rooney — who is running for re-election with State Sen. Gerald Cardinale and Assemblywoman Charlotte Vandervalk — said he’s ready for the onslaught.

"They’ve been trying to knock us off for years," said Rooney. "They’re going to use that money to propagate lies."

The Assembly’s longest serving legislator, Rooney has been an Assemblyman since 1983. He served as mayor of Northvale for 16 years, until the Democrats finally bumped him off last year. He suggests that’s enlivened them to take him on in the Legislature.

"They perceive me as a weak candidate," he said. "Do I care? Yeah, I care. Can I do anything about it? No. The Democrat Party is the party of corruption. They’re not going to raise money in that district. They’re going to bring it in from other sources."

He acknowledged Bush backlash is also firing up the opposition, but bemoaned the general condition of Jersey – and said the Democrats are to blame.

"I drove up the coast this week," said Rooney. "It was almost embarrassing to tell people I’m from New Jersey."

In Hackensack today, Ferriero said the Democrats had come to an agreement as recently as yesterday — that Wildes and company would withdraw to create the strategic chance for victory against Cardinale-Rooney-Vandervalk.

Weinberg gave credit to Corzine for helping to bring about the peace accord. "If we have been a dysfunctional family, we have needed the authoritarian figure to come in and he has," she said of the governor.

"This is a group of good people with good intentions," he said of the Bergen County Democrats.

The governor’s presence at the event was more than simply the embodiment of paternal goodwill. He pointed out that Bergen is the state’s biggest county and arguably the most important politically. He and Weinberg have been allied for years, but he needs the party organization in Bergen on his side for the longer war.

Weinberg also praised Wildes for his "graciousness" in stepping aside, though when the Englewood Mayor couldn’t resist pointing out that he could have won a primary race against Weinberg, the governor was compelled to steady the political animal at his side, who looked ready to jump up and start whaling on anyone who didn’t like her chances.

Weinberg also took a cool-it nudge to the back of her chair from Huttle.

"I wasn’t bristling, I was rolling my eyes," Weinberg said later in regard to Wildes’ remark.

His roiling political instincts notwithstanding, Wildes expanded the Ferreiro metaphor.

"Nothing more than a family squabble," he said, adding with a gallant side glance at Weinberg, "I look forward to having that first dance with Cinderella."

Ever the devilish operator, Ferriero at last tried to take the matrimonial imagery to the next level with Corzine. "I guess since this is a wedding, we can expect the envelopes," he told the patriarch, who simply groaned, "No." 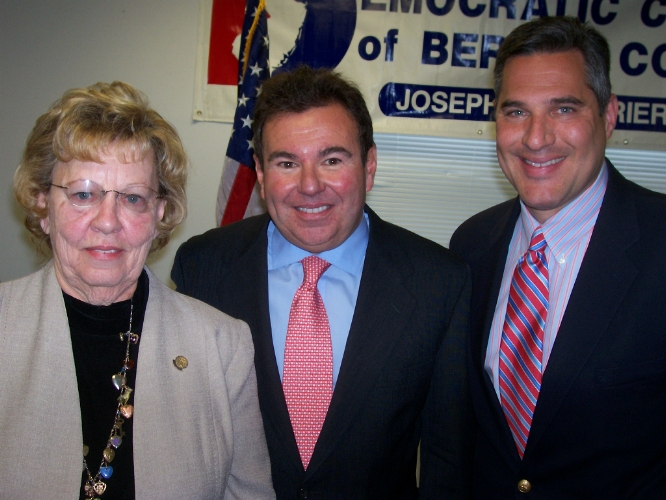