HOBOKEN – Sen. Barack Obama’s supporters say their man is the only credible candidate in the race for President in 2008 who from the beginning opposed the Iraq War.

Stuck like a lady in cement with her Iraq vote, Sen. Hillary Clinton is also a robotic study in how to be uninspiring, Obama’s supporters say. Meanwhile, former Sen. John Edwards talks about the good judgment required of a President. But in his biggest moment as an elected official, indeed that critical moment when he could have shown his own good judgment, Edwards voted to authorize George W. Bush to take the U.S. to war in Iraq.

Then there’s New Mexico Gov. Bill Richardson, who looks great on paper with experience holding nearly every office in the upper echelons of state and U.S. government, including Ambassador to the United Nations, Congressman and Governor, but who also has some skeletons, Obama’s people say, related to his allegedly bumbling response to an espionage scandal when he was Secretary of Energy.

“You could see Joe Biden as a running mate for Obama, the elder statesman brought in to complement the young leader,” Kenny Esser, an NJ for Obama supporter, said of the Delaware senator who appears dead-ended in the Presidential sweepstakes.

For his part, Obama still lags far behind Clinton in the polls in New Jersey.

Quinnipiac University’s latest shows Clinton getting 38 percent of the vote from registered voters. Obama leads a pack of second place Democrats with 16 percent, followed by former vice President Al Gore with 12 percent, and Edwards with 9 percent. Obama also would get licked by former New York Mayor Rudy Giuliani in a head to head match-up, according to Quinnipiac: 48-38 percent.

So on Thursday night in Hoboken’s Quay’s Restaurant on Frank Sinatra Drive in Jersey, where Hillary-ville gleamed on the other side of the river, the crowd of about 60 people already felt good about the freshman senator from Illinois, when Newark Councilman Ron Rice, Jr., took the floor at the campaign kickoff event.

Then the party started.

“This campaign is the conduit to change,” said Rice, wearing a sports jacket over an Obama 2008 T-shirt. €˜This is about mobilizing a grassroots effort.”

In a conversation at the bar earlier in the evening, the thirty-something councilman, who serves as the Obama campaign’s unofficial connection between elected officials and grassroots organizers, pointed out that grassroots community organizing is what he did to get elected and what he continues to do in his hometown of Newark.

Rice stormed into office last year with now-Mayor Cory Booker, upending the regime of Sharpe James. Deprived of a natural leader in the former mayor, who opted out of another showdown with Booker, whom he narrowly €” and questionably- beat in 2002, the remaining council people fought among themselves, tried to make a stand against the inevitable influx of youth in the form of Booker and his candidates, then went down in fractured defeat. Now they’re out there in their respective wards, stirring up dissent, seizing on every opportunity to shout “incompetence” or “fraud” with the young first term mayor’s every move.

“Booker is a comprador,” says poet and Sharpe James apologist Amiri Baraka. “He represents no interests in the Newark Community. I could send you a longer essay. Booker is a direct rep of corporate monopoly, nothing else.”

Rice says the only way to fight back is to get in those same neighborhoods and keep the people focused on what the new administration is doing and trying to do.
“People want to know, for example, why we need money for lawyers’ fees, for infrastructure,” he said. “If the city is to move forward, you need to spend money in key areas. You need to eliminate the backlog of cases from years of neglect. You need city employees working on computers, not typewriters. We need to communicate, and we need to keep organized.”

So when he looked out at the roomful of Obama supporters, Rice saw the same opportunity for action.

Get out there, and get the message out there. Get the youth involved. Challenge the power structure. The fundraisers and parties are all part of the battle plan.

“The primary is ten months from today,” said organizer Keith Hovey of Somerset. “There’s still time to get people involved, to tell people about Obama’s message.”

“They know who he is,” said Sheehan. “He’s a rock star. But they’re going to start hearing specifics.”
The evening was largely the offspring of lead organizer Damian Bednarz, a graduate student at Seton Hall University’s Whitehead School of Diplomacy and International Relations.
“Look at the people,” he said. “You’ve got young people here on a Thursday night, all races, all passionate about supporting Barack Obama.”

There’s a health care plan the Democratic Party public still clamors for, and specifics on the environment and other foreign policy issues like Iran. Today, it comes down to the war.

Clinton and a Democratic majority in the U.S. Senate were part of the machinery of decision that led to the dreadful events in Iraq, in Rice’s view, in Bednarz’s view. And the only way to overturn the breakdown is to start on the outside, with a grassroots movement behind a candidate who opposed the war from the start. 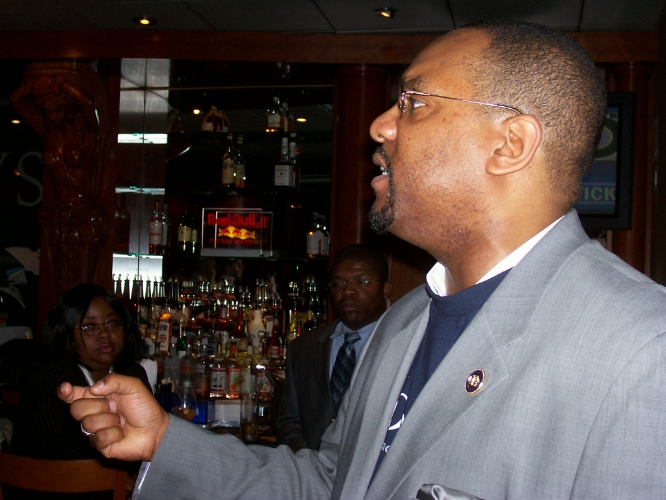