BURLINGTON – Democrat Richard Dennison launched his campaign to unseat State Sen. Diane Allen today by linking her to George W. Bush, but he was unable to identify a single time he would have voted differently than her in Trenton.

The 29-year-old lawyer/undertaker, who interned in the Clinton White House, called on Allen to "declare independence from George W. Bush and his politics of special interest, so that we may best serve our true constituents, the people of the 7th district."

Standing at a podium on the sidewalk in downtown Burlington alongside an easel with a written pledge on it, Dennison then signed his name to the pledge, and delivered a copy to Allen's assistants inside the office, who said the senator was not present.

"It appears that Mr. Dennison has no idea why he's running," Richard Levesque, executive director of the Burlington County Republican Party, said later in a telephone interview. "To me it appears Mr. Dennison is all rhetoric and no substance."

But Dennison insisted Allen's nexus with Bush goes behind her fund-raising, and charged that a donor to Allen — Parsons Infrastructure and Technology Group — was also a campaign contributor to the President, and received contracts in Iraq as part of the war reconstruction effort.

Confronted with his specific objections to Allen's voting record in Trenton, Dennison ducked the question. His staff later amplified the point about how Allen, who represents a Democratic district, may vote with the majority party most of the time, against the grain of the GOP — but that her friendliness on Jersey issues belies her coziness with a failed president and Parsons.

"Everywhere I go in the district people are expressing their disappointment for the war in Iraq," said Dennison, who grew up here, and whose father owns a prominent funeral home in the area. "It's time for Sen. Allen to tell us where she stands. She never once apologized for her critical role, even flying down to Texas to beg Bush to run. …I question her judgment profoundly."

Pressed again on Trenton-specific issues, Dennison said he believes he would support the governor's budget.

Levesque was happy to respond to that.

"If Rich supports a budget that contains $2 billion in new spending, he needs to do his homework on the budget," Levesque said. 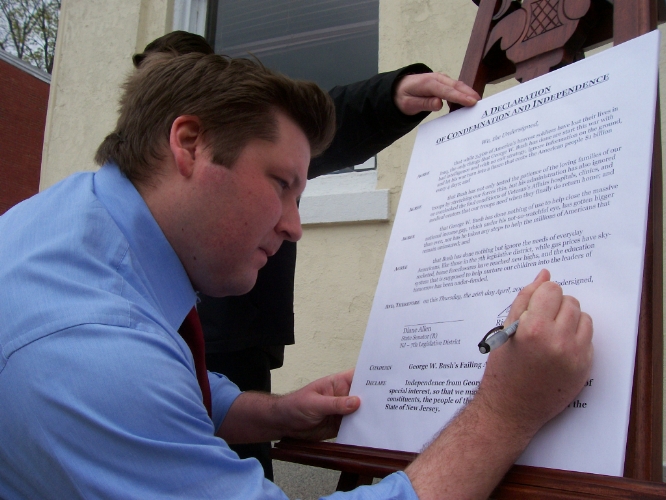