As an electronics technician in World War II, George Hunt of Burlington, 82, coordinated amphibious landings in the Pacific, the kind where the men ran up the beaches under fire and took territory.

"We used to sit in the navigation boat and time it so that all of our landing craft were synchronized when they hit the shore, in the Philippines, New Guinea, you name it, from 1943 until the war ended," said Hunt as he trudged within a column of New Jersey war protestors on King Georges Post Road in Edison Wednesday afternoon.

On the other side of a police line at the New Jersey Expo Center, plain clothes-men eyed the crowd hard and wrote in notebooks and behind them, the Republican State Committee welcomed President George W. Bush to a fund-raiser for Legislative candidates. Ticket prices ranged from $300 per-person to attend the main reception to $5,000 for a photo-op with the President.

Hunt shook his head at the questions coming his way, closing his eyes, trying to find manners in the midst of the spectacle, but finally unable.

"Impeach the lousy bum," said the old combat veteran, un-crumpling and handing over a typed memo of his prepared remarks for the crowd. "Bush lied to Congress and we the citizens in 2002 when he said Saddam Hussein was getting uranium from Niger. He lied again when he said Saddam and Osama bin Laden were conspiring to commit terrorism against the Untied States. He lied when he said there were weapons of mass destruction in iraq in early 2002."

He sat in the grass in the shade of a tiny tree at the edge of the road, squinting as the sun beat down on the other protestors.

Raising an anti-Bush sign a few yards away was another old Navy man, Richard Fuller of Hazlet.

"I’m protesting all of the politicians who would come and receive this President," said Fuller, a retired officer who served aboard the U.S.S. Thor. "I objected to this war before it started on Constitutional grounds, and I want the troops home now. I think the Democratic Party also really let the troops down, and Congressmen have really turned their backs on the public."

There were young people screaming and shaking signs. Among them, the subdued elders made a statement, almost too angry to speak.

"I came out here today to demonstrate against the criminals now in power in Washington," said Pam Black of South Orange, whose son served two tours of duty in Iraq in the U.S. Marine Corps. "This president has destroyed a whole country and a whole people for oil. There were no weapons of mass destruction and there was no link between 9/11 and Iraq. It’s all been lies."

Black said she was the Cub Scout mother of a friend of her son’s who was killed in Iraq, Lance Cpl. Edward "Augie" Schroeder.

There were 1960s songs being strummed and sung in a circle of nearly 300 protestors, and Black had no interest.

"I’m past the point where I want to sing," she said. "I don’t need any more information I don’t want to talk to like-minded people. I want to see thousands of people out here, not hundreds. Read about your American Revolutionary War. Stand in front of a tank. I just thank God my son did not come home in a coffin no one was allowed to see, or to a hospital where he was not cared for."

Holding up signs of New Jersey soldiers slain in Iraq, stay-at-home mom Shannon Smith of Jackson said, "I can’t believe anyone would go to support Bush. My Republican friends don’t support him anymore. Why would anyone let him come here and be pictured with him?"

Smith added, "I have three boys and I will never let them join the military, and we’re a military family. My husband’s retired military."

"He’s killing off my son’s generation," said Babcock. "Anything I can do to make this man’s life miserable, I’m going to do it. He’s a danger to the world, and anybody who supports Bush doesn’t deserve to be re-elected."

As the featured speaker of the protest, U.S. Rep. Frank Pallone of the 6th Congressional District strode across the gravel drive at the back end of the sprawling corporate complex. A hero here since he voted against giving Bush the authorization to go to war in Iraq in 2002, Pallone now faces the challenge of hardcore anti-war constituents who want the U.S. out of Iraq.

"We passed a bill that had a timetable for withdrawal," said the Congressman. "The only thing Bush will take is a continuation of the war with no strings attached. But we will never get out of Iraq without a timetable, and meanwhile we have a domestic agenda that is going unserved."

The Democrats and anti-war Republicans need a two thirds Congressional majority to make it happen, and with a President stubbornly dug in on the war question, the Congressman said the best hope is to elect more Democrats to Congress, and a Democratic president in 2008.

Pallone said many of his colleagues who voted for the war have admitted they made a mistake, and they should not necessarily be punished. The trouble for Pallone, he said, is that Bush continues to go at foreign policy with his head down and his arms flailing and remains stunningly "unwilling to follow a new agenda."

"Impeach, Bush," a protestor shouted at Pallone, shaking a sign in his face. "Impeach him!"

As Pallone walked away, Ed Dunphy of Lawrenceville said, "I recently quit the Democratic Party because they have no spine. It’s very easy for these guys to come and preach to the choir. I simply want them to impeach Bush."

Assemblyman Joseph Cryan, the Democratic State Chairman, which recruited a lot of the protestors, grabbed a microphone after Pallone.

"The arrogance of this administration," he shouted to the crowd. "New Jersey is the most diverse state in the country, where we come together in celebration of diversity. And here you have a president who believes divisiveness is the key to success, the opposite of what we believe."

Cryan was still amazed the opposition would bring Bush to Jersey, and later couldn’t help but shake his head at what he sees as the Republicans’ political ineptness. "I’m encouraged they once again have associated themselves with his polices," Cryan said.

According to an April Quinnipiac University poll, the President’s approval rating in New Jersey is a basement level 25%.

"We didn’t invite him to Edison," Mayor Jun Choi wanted to make clear.

Dana Wefer, a two-time Morris County Freeholder candidate who this year is running as a Democrat for the State Assembly in district 25, said of her mostly Republican district, "People in Morris are hugely dissatisfied. We do better every year, and I think it’s a direct result of federal policy."

Entire families shook signs in the general direction of the steel and concrete structure where the President was said to be fund-raising.

"I thought it was important day to be here," said Cat Richter of Philadelphia. "My whole family’s here. There have been 3,467 soldiers killed in Iraq and I think it’s important to show Bush we don’t support this war."

"The emotional trauma is going to go on for years," said Fuller. "What Bush and his war have done to the American family is unconscionable. The fact is this President is the absolute worst thing that has happened to our country."

The police cars with flashing lights encircled the building housing Bush in the distance. Sitting under his tree in the shade, days after former President Jimmy Carter softened his earlier remarks about the Bush administration being the worst in the country’s history, Hunt said bluntly, unequivocally, "George W. Bush is the worst president in United States history." 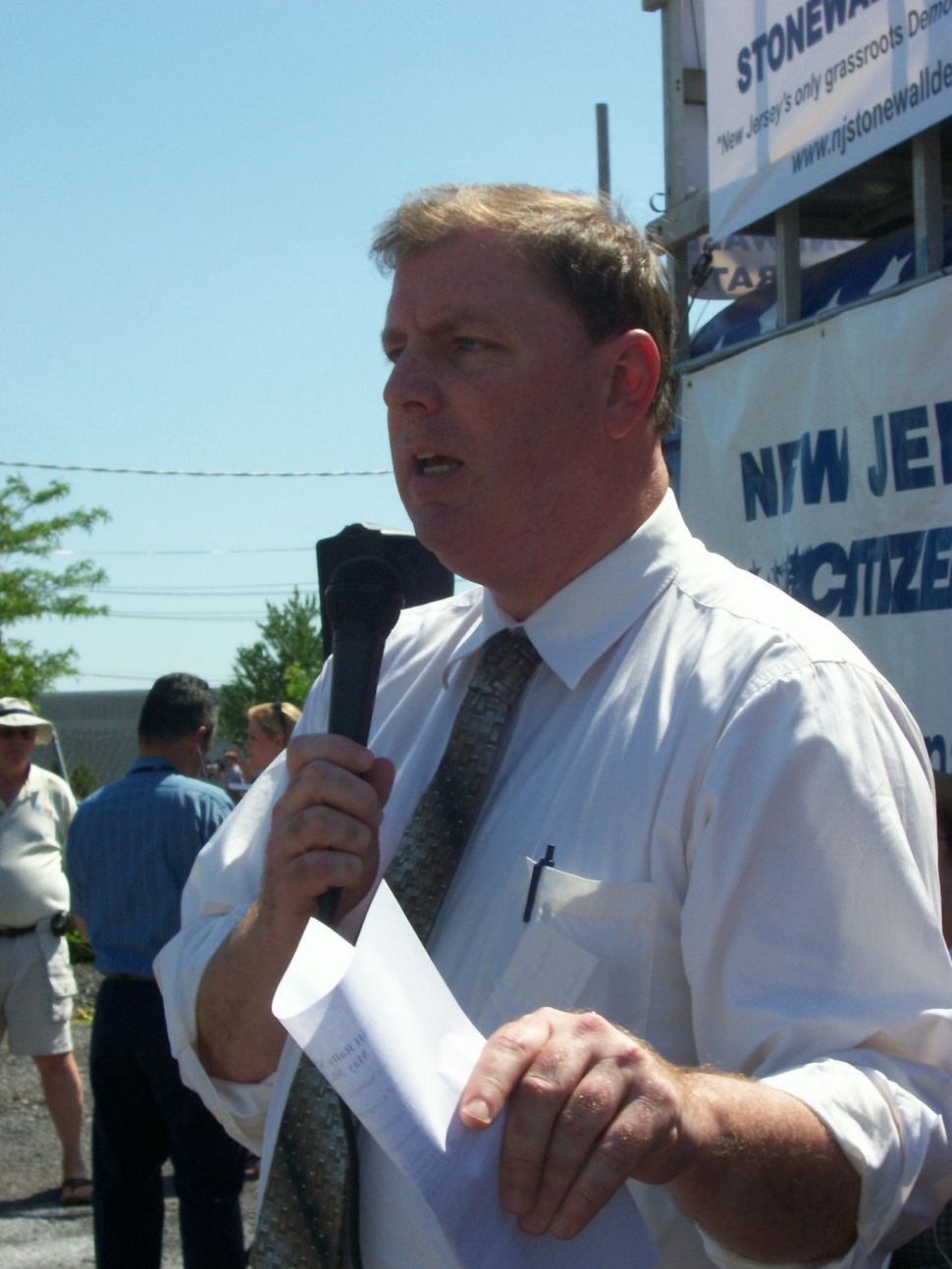