The youngest U.S. Senator from New Jersey was John Rutherfurd, who was just 30-years-old when he was elected in 1790. Rutherfurd had spent two years as an Assemblyman from Warren County, and was a presidential elector pledged to George Washington in the 1788 election. He won the seat of New Jersey's first Senator, Dr. Jonathan Elmer, who was returing home after two years in Washington. Rutherford was re-elected to the Senate in 1796, but voluntarily ended his political career at age 38 when he resigned in 1798. He held numerous appointed posts — he served on a commission to determine the route of a canal that connected the Delaware and Raritan Rivers — and practiced law until his death in 1840 at age 79.

In 1808, Rutherfurd built Edgerston Manor — named after the family ancestral home in Scotland — on the Passaic River. The Borough of Rutherford (a different spelling) was named after the former Senator and longtime resident when it was founded in 1881. 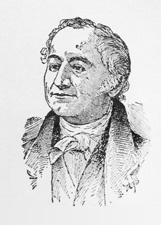