Sen. Barack Obama told a crowd of AFL-CIO workers at the War Memorial Monday that the United States must rewrite its trade policies to benefit workers worldwide, enforce existing trade laws in part to diminish the power of China, solve the country’s healthcare crisis, which Obama says is draining American resources, and stop rewarding with tax cuts those American businesses that ship jobs overseas.

When it comes to health insurance, "I don’t mind insurance companies and drug companies in on the negotiating," Obama said. "I just don’t want them occupying every chair."

Running for the Democratic Party nomination for president, Obama made his first swing through New Jersey Monday where he picked up the endorsements of Newark Mayor Cory Booker and Jersey City Mayor Jerramiah Healy, attended private fund-raisers in Jersey City, Montclair and Princeton, and burnished his alliance with labor.

The Illinois senator enjoys a 96 % lifetime rating from the AFL-CIO, but in New Jersey faces a 22-percentage point deficit in a race with Democratic front-runner Sen. Hillary Clinton.

Without ever naming his opponent, Obama pounded Clinton on two significant fronts.

Then there’s the ongoing War in Iraq, where two New Jersey soldiers were killed in the last week, bringing the total number of war dead in this state to 72, according to the Star-Ledger . In 2002, Clinton voted "yes" authorizing President George W. Bush to use force in Iraq. Obama opposed the war from the beginning, arguing that the American invasion of Iraq constituted a "dumb war."

The crowd drowned out the rest of his point.

There were 700 union members present at the event, representing AFL-CIO membership in New Jersey numbering 1 million, according to union spokesman Steve Smith. The event is one of several the labor organization is sponsoring with different candidates in the lead-up to a June pow-wow in Chicago at which point leadership will make a decision about whom to support.

"I think what I’m looking for is labor attitude, a candidate who not just talks about labor, but who feels labor," said Herbert Hall, a member of the longshoreman’s union who works in Port Newark, one of 4,000 union longshoremen in Jersey.

Ray Stever of Edison, president of the New Jersey State Industrial Union Council and a steelworker by trade, wanted specifics.

"I’d like to see Obama define the healthcare issue," said Stever. "That’s a big chance, of course, going up against the pharmaceutical and drug companies – no one wants to go up against that money train. But someone’s got to do it."

Then there was Carla Katz, president of the New Jersey Communications Workers of America Local 1034, who like Hall and Stever, says she remains uncommitted on a presidential candidate.

"The most important thing for me is that he demonstrate an understanding for the need of working families to survive in the economy," said Katz. "A big piece of that is healthcare."

Obama’s stances on the issues repeatedly brought the people out of their seats. He opposes school vouchers. He supports the Employee Free Choice Act and collective bargaining. He wants universal healthcare and an end to price gouging. His stances were broad, but they were the right moves for this group.

"Corporate profits have never been higher," said the candidate. "We have not seen an income gap like it is now since 1928. It’s because unions have been weakened."

When UFCW member Kathy Wilder of Wall asked the senator, "What are you going to do about Wal-Mart?" there was an up-swell of boos and groans at the mention of the corporate giant, and Obama dead-panned, ""I won’t shop there." 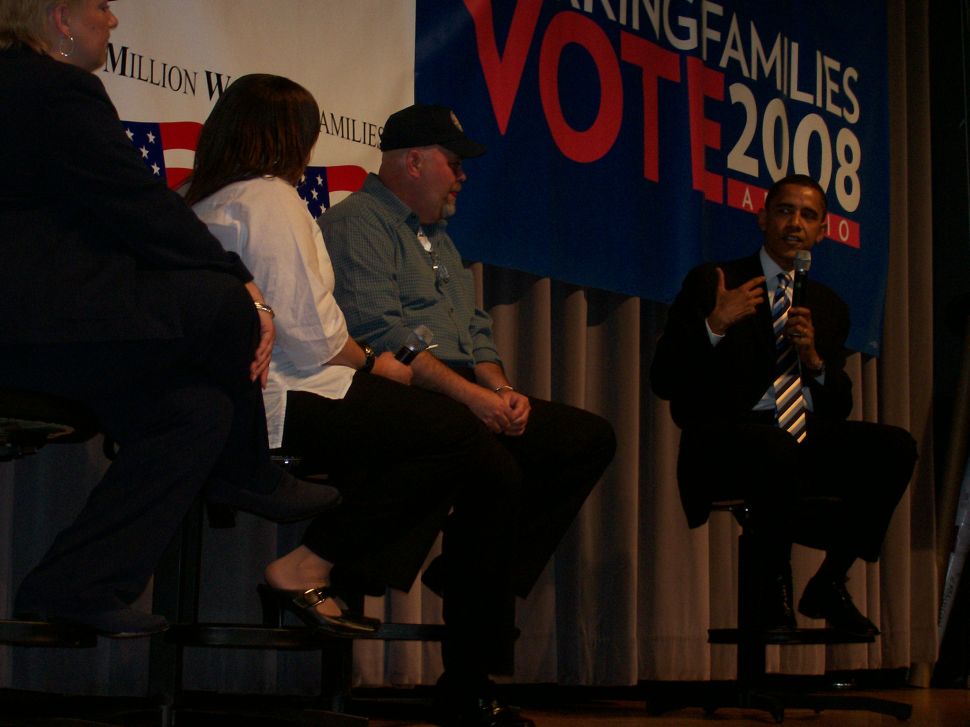