HOBOKEN – It's down on the ground in Hoboken in the Marshall Drive neighborhood where Councilman Christopher Campos grew up and he's in a ring of people, mostly supporters, telling an interloper in a green Dawn Zimmer shirt why he's the man in the Fourth Ward.

"The only way it works is if you get involved," he's telling Aaron Steed, working the hand gestures hard in time to the points he's making. "Come to council meetings. Hold politicians accountable. Hold me accountable. These are problems of socially constructed neglect."

"The only thing I got from you was a basketball court," Steed tells him.

A car goes by draped in Campos signs, with a Puerto Rican flag flying on the hood. In the shade are the women of Marshall Drive.

"Let them what they want about my nephew," says Margie Bihart, who says it's her first day out in the streets since she broke her leg in February. She's out there in a Campos T-shirt, rolling the wheel of her chair with one hand and turning down the salsa music on a radio with the other. "I've lived here 1972. My nephew came from right there."

She points to an apartment building at the end of the block. "That's where he's from. Subsidized housing. All of this back here on Marshall Drive. Let me tell you something. The only person who ever talks about this place up at City Hall is Christopher."

She's not alone in that belief out here on Tuesday, Election Day.

It's almost all Campos up and down Jackson Avenue where the salsa music fades on the side streets where the church steeples throw shadows on the liquor stores. There are some more green shirts here and there – the troopers of chief challenger Dawn Zimmer – but it's Campos country, no question.

"He understands us," says a woman.

Yeah, but what about Campos backing Southwest Development? What about the flooding in recent times?

The questions are met with a question.

"What's Dawn Zimmer going to do about it, walk her dog in the park?" says a woman who says she's lived in the neighborhood all her life. "Campos isn't the best. He's one vote on the council, but he's our vote. Zimmer hasn't lived here very long."

A photographer by trade, Zimmer has lived in Hoboken for five years.

There are some spats on the street. Flare-ups of temper and closer inspection reveals a green shirt going up against a half dozen red and blue Campus shirts.

"There have been a couple of fist fights over here," says a Zimmer campaigner working the intersection of Jackson and Third. He drops into a Jack Dempsey stance and grins. "We're all right here," he says.

Over on First Avenue there's more of a green-shirt presence.

Inside Dawn Zimmer HQ, "Don't call me 'general,'" Michael Lenz tells a visitor as he crumples a sandwich wrapper between his hands and barks out another set of orders to yet another ragged-looking platoon of campaign workers.

They stagger back out into the sunlight, back down the street toward Marshall Drive.

"You've seen the people who stand around abortion clinics, right?" says Lenz. "It's such an intimidating situation. Campos has people out there forcing people to vote for Campos. Our people are out there to let people know,'It's okay to think for yourself.'"

His candidate isn't around just now. She's out there in the ward somewhere, pounding pavement. He husband appears from the depths of headquarters, garrulous and feisty.

"Campos was a lackey for the HCDO (Hudson County Democratic Organization), and now he's going to be a lackey for (Union City Mayor and Assemblyman) Brian stack," says Stan Grossbard.

Suddenly, there are two beaten-down cars pulling up in front of the place and Lenz is out front watching a parade of neighborhood types: tattoos, t-shirts, Yankees caps, dutifully filing past into campaign headquarters.

Recruits. Ready to lock and load.

The leader, who identifies himself as Cookie, lets loose a torrent of expletives.

"Now let me tell you why I can't pay you," Lenz tells him. "Dawn's opponent, the councilman, gets campaign contributions from developers and he's able to pay people to work for him. I can't do that. This is a grassroots campaign. I can give you a T-shirt."

Cookie's compatriots are already pulling out.

"Are you kidding me," says a woman. "I ain't doing this for charity."

There's the rev of an engine and a carload calling his name and now Cookie squares his shoulders and scowls at Lenz.

"You better get me some money, brother," he tells him.

It draws a giggle from Cookie but he's still worked up and the woman he refers to as his wife is calling from the car and he brags to everyone there that he doesn't need the damn money anyway, he's in the union, snags the T-shirt and trots over to the car.

A rack body truck plastered over with Zimmer campaign signs rattles up and two guys in green shirts jump down from the cab.

"We broke down in Jersey City," one of them says.

"You broke down in… Jersey City??!!" Amato cries. "What the hell were you dopes doing in Jersey City? Oh, Geez. If I had known they were going to take my truck to Jersey City…"

All day long in the Fourth Ward in Hoboken. 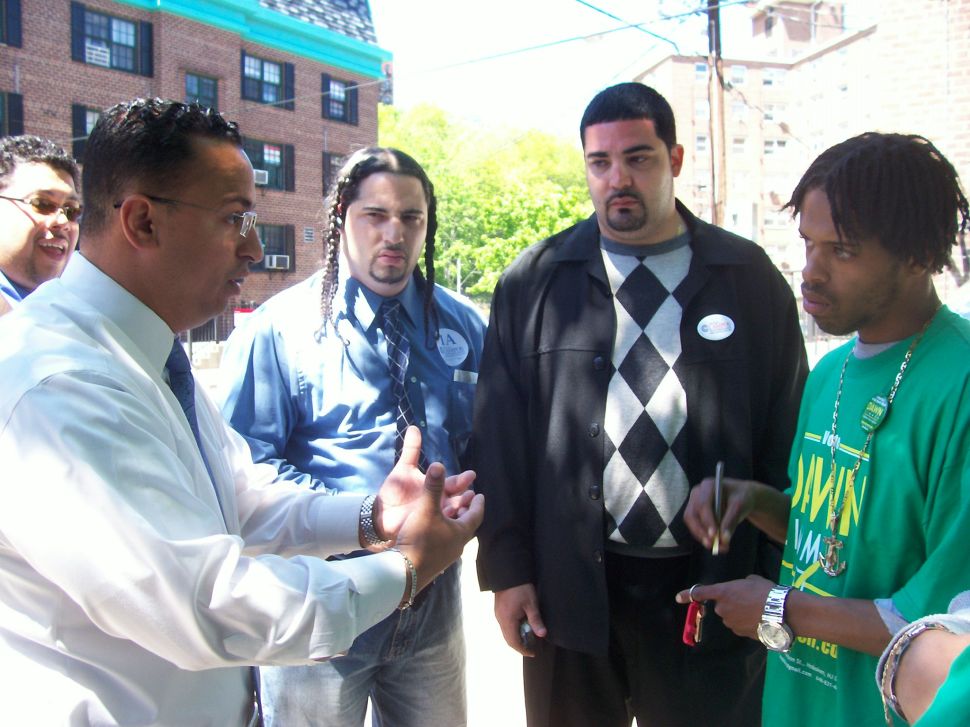