Who wins this district 31 Assembly race in Bayonne comes down to whether voters approve of the general direction here since the city suffered the closure of the Military Ocean Terminal in 2000, or whether the slow rebuilding effort has largely been a bust, overcast by a perception of not enough people-power at the bargaining table.

On that latter side of Broadway Avenue is photographer Anthony Chiappone, a determinedly gadfly Bayonne City Councilman who built a reputation as a government watchdog with his local cable television program before getting into political office himself in the 1990s, jousting with veteran Bayonne Mayor (and state Senator) Joseph Doria, and later allying with maverick Jersey City Mayor Glenn Cunningham.

A few blocks up on the other side of the street stands the rival campaign headquarters of attorney Nicholas Chiaravalloti. A former Doria staffer who came out of Our Lady of the Assumption Parish, filing papers in Doria’s Assembly office as a boy, Chiaravalloti worked his way up in adulthood to become state director for U.S. Sen. Robert Menendez before resigning a month ago to focus on this campaign.

"Hey, Tony!" comes a happy cry from a car window out on Broadway, and when Chiappone turns a horn blast from a supporter brings a smile to his face.

"Nicholas!" a woman cries from a passing car on Chiaravalotti’s strip of Broadway, and he waves back.

These family men walk proudly and comfortably throughout Bayonet’s three wards made up of 51 districts: where it’s roughly Irish in the first; Polish, Russian and Slavic and Spanish-speaking in the second; and Italian in the third.

"People pull together here, and I love it," says Chiaravalloti. "When I think about this town, I think about a fund-raiser for Pat Riccardi, a roofer who was burned by tar, and the Masonic Temple event that was packed to help him out. That’s Bayonne."

But Chiappone, who once worked as a mixer at the Best Foods factory when it was still open, says of his opponent, "He’s a young guy, who’s part of the old boy’s network."

Chiaravalloti doesn’t hide his political roots. It was Menendez who negotiated a stunning 0-percent transfer of the federal terminal land to Bayonne, and while Doria took some power shots from Chiappone, particularly on the issue of whether to locate a waste transfer station here, Chiaravalloti notes that Chiappone originally voted for the station before turning on the project, which Doria also ended up opposing.

"I made a mistake," Chiappone says of his initial vote on the waste transfer station. "When I make a mistake, I’m going to acknowledge it. The difference is I didn’t continue to try to jam (the project) down people’s throats the way the mayor did. I did my due diligence, and it made me realize never to take anything at face value."

He’s never been able to completely face down the rabble-rouser tag, but no one ever questions his guts either.

Still, "It takes political capital to build Bayonne’s future, says Chiaravalloti. "Every developer that comes to town looks for concessions from the city."

Ironically, it’s the low-key establishment boy scout Chiaravalotti who’s running on the hell-bent for leather ticket of state Senate candidate Assemblyman Louis Manzo, while the rebel Chiappone is nesting in the arms of the Hudson County Democratic Organization.

Alliances live in and die for elections in Hudson. Who’s left standing adjusts in the chambers of power – until it’s time to go back-to-back again come the next election.

On the issues front, both candidates say property taxes and jobs are some of the chief worries of residents.

A city of 61,800 residents overshadowed by the Jersey Cities and New York of the world, Bayonne stands fiercely protective of its blue collar immigrant heritage. Most immediately troubling for people here, however, is the city is $25 million in the hole. No longer a place where a majority of residents both live and work, in Chiappone’s words, Bayonne’s been kicked around in conversations about districts that might benefit from taking part in the Abbott Schools program. Whatever its future, the city struggles to shake off the effects of the base closing, a final indignity in a series of factory fold-ups in the last quarter of the last century.

Right now, the middle class squeeze is on as homeowners already paying on average of $5,000 to $6,000 in property taxes (40 % of which go to the school district) face a property tax hike this year, the bitter part of a solution – along with a $23 million bond – approved this week to settle the bulk of the city’s budget deficit.

Chiappone, who served in the Assembly from 2004 to 2006, before losing in a special election when he was forced to run on a ticket without the overwhelmingly popular Cunningham died in 2003, says he wants to return to Trenton to tackle this issue among others.

"The Assembly hasn’t addressed property tax reform," says Chiappone. "The homeowner is carrying the burden of school, municipal and county taxes, and I think the way to reform this in part is to raise the state sales tax from 7 to 9 cents and dedicate that additional 2 cents to help eliminate the property tax as a way to pay for schools."

A two-cent sales tax hike would bring in nearly $3 billion, far short of the current funding required for schools.

"That's where I would start," says Chiappone, who added he is also open to other measures, but distrusts any plan that would sell or lease state assets.

Chiaravalloti stops short of advocating tax reform predicated on tax increases, saying he wants to look at "all options," and in the meantime help expand the commercial and industrial base of Bayonne, building on the mixed-use development plan he presented for the area where the military base was located.

Chiappone gripes that the plan was mostly a giveaway to developers and a catered affair to the needs of wealthy commuter in-fill, but Chiaravalloti defends the residential-commercial district complete with cruise ship facility as having "fantastic economic potential" for the whole city. Doria says the affordable housing portion of the residential share of the project represents about 30 percent.

"He’s very good at political theater, but in nine years he hasn’t accomplished a single thing," Chiaravalloti says of his opponent.

But Chiappone counters that he’s proud of a bill he sponsored and shepherded to passage while he was in the Assembly, which committed state funds for Section 8 housing after President George W. Bush made federal cuts.

"That bill enabled some people to keep their homes," says Chiappone.

While Chiaravalloti and his supporters complain that their rival bends too freely with public opinion and demagogues the issues, the councilman insists his record of eyeballing every big project and refusing to stand down in the face of powerful interests gives heart to those residents who don’t want a rubber stamp.

Then there’s Chiaravalloti, who was on staff in 2002 when Menendez opposed Congressional authorization of what has turned into a costly war in Iraq, a federal issue only, maybe – but not when federal aid dollars are so important to a vulnerable place like Bayonne.

Though the city enjoyed representation in the senate from Doria the past few years – the fact remains that Bayonne is in the rumble seat of the 31st district, where just a third of the constituents are concentrated behind the engine of Jersey City. The most popular candidate in Bayonne could lose district wide if only because the top of the ticket drags him down.

Everyone knew the senate seat would return to J.C. when Doria retired, which he’s doing at the end of 2007 after 28 years total in the Legislature, and that being the case this Assembly contest takes on particular significance for 31st district voters. For if the race is ultimately anchored to Jersey City and the players that wield and vie for power therein, the hometown victor in Bayonne will be the man in Trenton representing this proud,

"Don’t forget about me" punctuation mark of fire houses and churches at the end of the Hudson County peninsula called Bayonne. 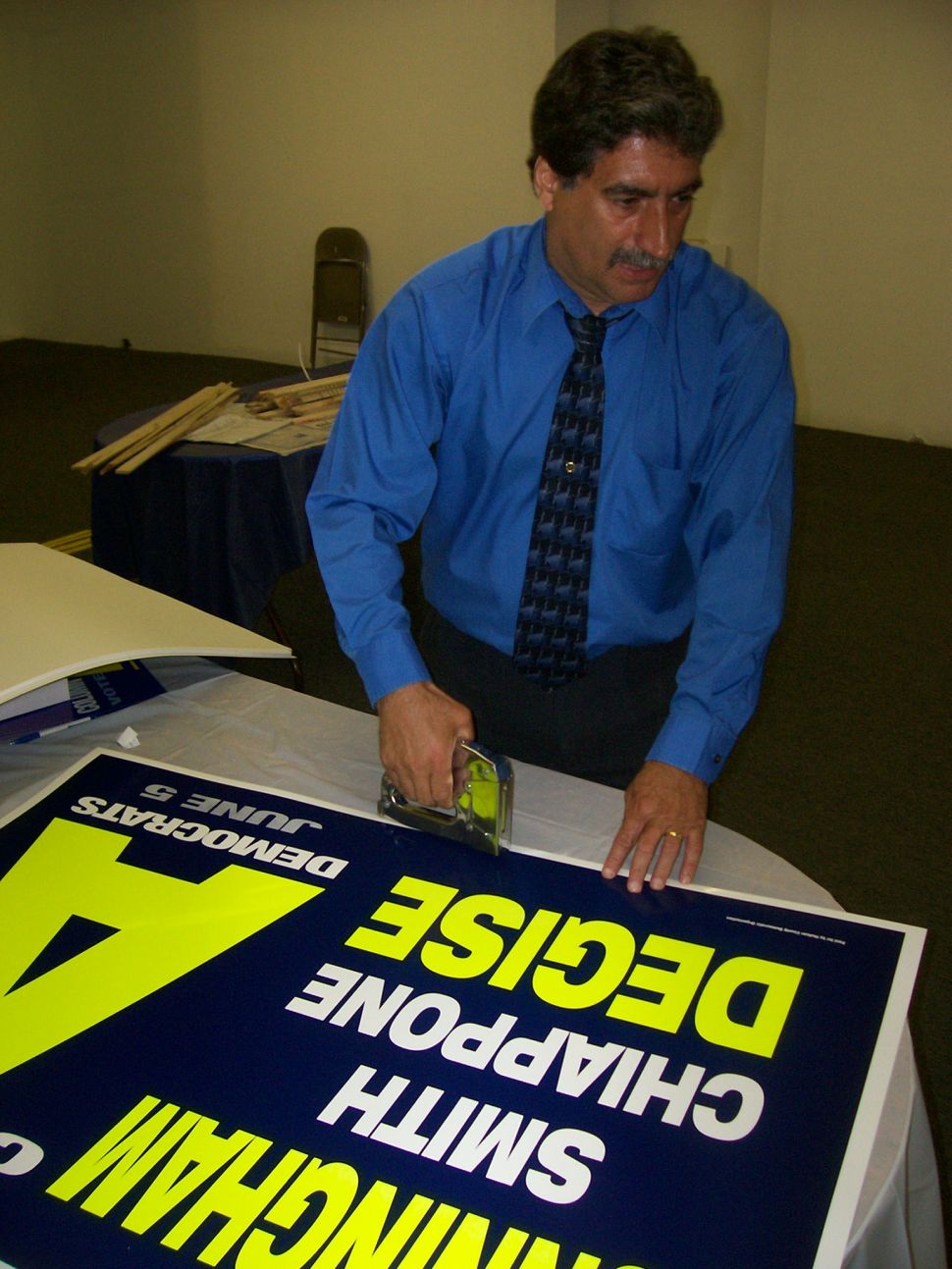