West New York Mayor (and Assemblyman) Silverio “Sal” Vega stands in front of the Pathmark in Weehawken, under a Unite Here! baseball cap, talking about how preventing his fellow Cuban Americans from marching through West New York in celebration of Cuban Independence Day onJune 3rdis a principled stand he’s taking over his advisors’ desperate entreaties to the contrary.

As long as Fidel Castro and his people remain in charge in Vega’s native country, the mayor says he doesn’t want any celebrating, and would prefer a silent march on Bergenline Avenue.

“I don’t feel right having a party coming down through town,” says Vega. “I see it as an event that non-Cuban Americans see as a great celebration, a festival televised throughout the state. To me it sends the wrong message. Here you have 47 years of dictatorship and people are celebrating Cuban Independence. I’m simply saying we’re not going to celebrate because the people of Cuba can’t celebrate.”

Confronted with the marchers’ First Amendment rights, and the argument that even people who represent an idea hateful to him have the right to express that idea, Vega says they can take his permit rejection to the courts.

“They have recourses,” he says. “This is a country of law, not men. If they do take it to the courts, and they’re successful, I too can practice peaceful disobedience.”
His handlers have their heads in their hands, but Vega says he doesn’t care.

“It’s going to cost me dearly politically,” he says. “But as a Cuban-American, I am connected to the future of those Cubans who lie on that island.”

Vega, 50, feels passionate about this.

He grew up in Cardenas, Cuba, and he and his family came to the United States after his father spent three and a half years in prison.

“Cuba went through a period of time in ’62, through the mid 1960’s, during which some people who fought with Castro against (Fulgencio) Batista realized as he consolidated power on the island that this was not what they wanted,” he explains. “So there was a counter-revolution. Well, the oppression that came after these counter revolutionaries worked with the United States at the Bay of Pigs was massive.”

Vega’s father owned a small farm and a produce business. When people throughout the countryside went to him for food, he helped them. He later told the Castro cronies who arrested him that he never turned down anyone who went to his door.

Vega’s hoarse from addressing the crowds. He’s tired. The Freedom Van RV he’s been renting and driving around the Legislative District where he’s running against Union City Mayor (and Assemblyman) Brian P. Stack for state Senate stands in the parking lot like a colossus. But as usual Vega feels as though he’s having a Stack attack, as rival campaign signs blanket the windows of a towering residential complex across the street, and Stack’s campaign workers stand on all sides vigorously working customers over with literature that looks freshly cranked out of the presses.

Everything he throws at Stack – the charges of being a dictator, a strongman, an intimidator – comes back at him comes with a vengeful tag line, that as a school athletic director, mayor and assemblyman, Vega’s a “triple-dipper.”

And to that, Vega, who remembers his father imprisoned in Cuba, coming to this country with nothing, says with an edge, “My father worked three jobs. He worked in a factory, a restaurant and sold jewelry on the side. He was a triple-dipper too. That’s where I learned it. He died 15 years ago. His ashes are in the Hudson River. He wanted them as close to the Statue of Liberty as possible, and that’s where we left him.” 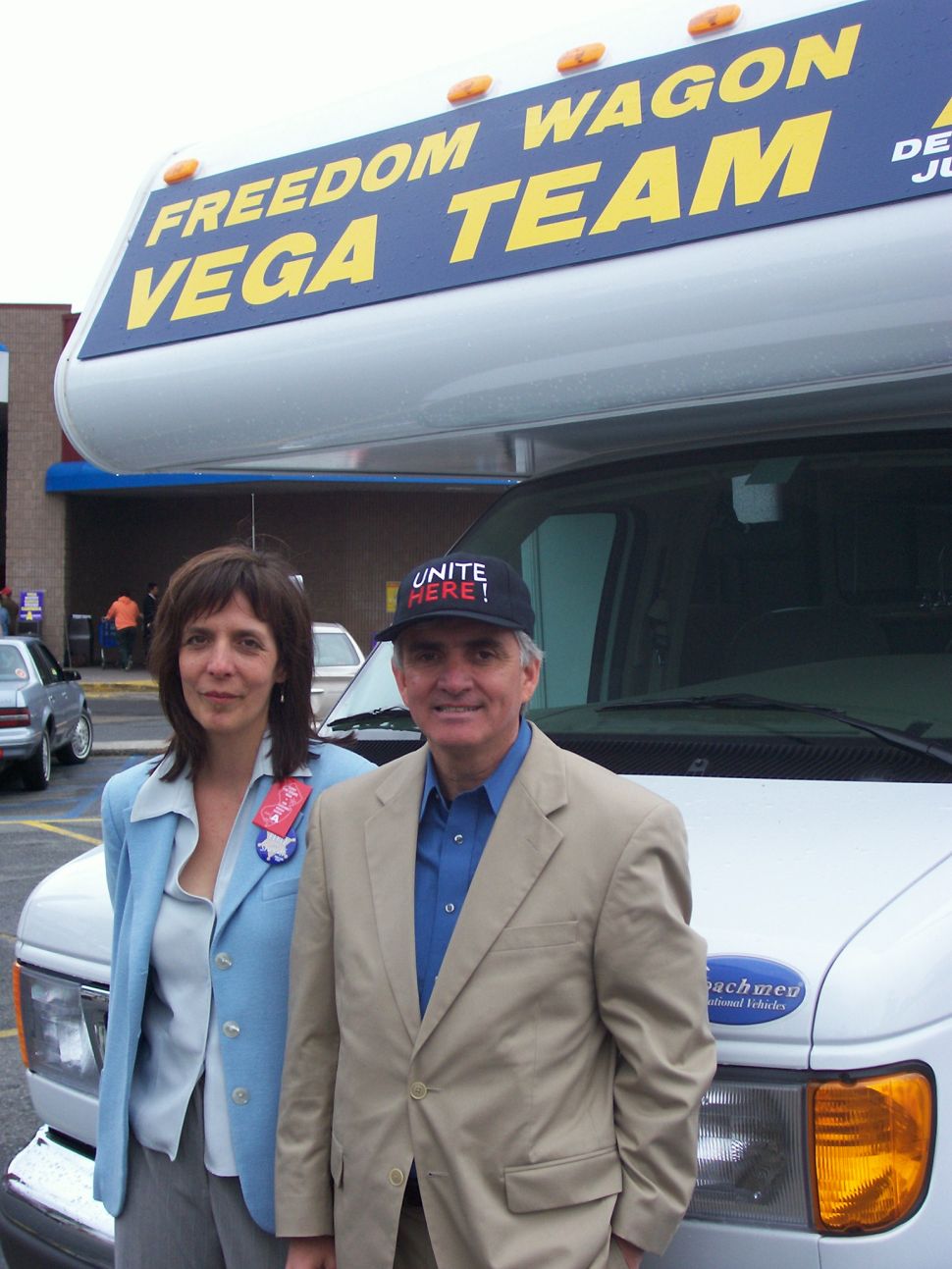