Defeated district 24 Senate candidate, Assemblyman Guy Gregg, was listed among the critically wounded Friday, unable to make reveille at the Sussex County Republican Party Unity Breakfast in the Lafayette House.
But there was his conqueror, Steve Oroho, serving coffee, making weight jokes and finally urging his party to put the campaign battle in perspective as he choked up while reading a letter from his kid brother, who’s a Black Hawk Helicopter pilot stationed in Kirkuk, Iraq.
Awarded the Air Medal for his war service, Oroho’s brother told the virtual State Senator-elect that when the men make phone calls home, "I haven’t heard one of them call to see what their bank balance is… They’re calling their kids."
"When someone’s away we forget what they go through," Oroho told a transfixed audience. "I ask you to keep them in your prayers."
The battlefield aftermath imagery and evocation of Republican roots abounded all morning.
Quoting Lincoln’s "with malice towards none and charity towards all," Sussex County Republican Committee Chairman Richard Zeoli underscored how critical it is for Sussex County Republicans to not become a house divided and risk splintering apart as the Bergen County Republicans have over the past years. Emerging in triumph from an acrimonious primary in 1860, Lincoln welcomed his enemies in to work with him, and such is the Republican charge now after Oroho and Gregg’s epic struggle ended with the latter on the ground Tuesday night.
"My challenge to you today is to be like Abraham Lincoln," Zeoli told the crowd.
While Gregg was personally not in attendance, some of his supporters were, including U.S. Rep. Scott Garrett, who in his turn at the podium rapidly found a target beyond present company in the form of "the Democrat Party" representation in Washington, D.C. and a doomsday check list certain to elicit GOP growls: U.S. Speaker Nancy Pelosi, Rep. Charles Rangel, Rep. John Murtha, Rep. Barney Frank and Sen. Harry Reid.
He also set off alarm bells at the mention of former Sen. Robert Torricelli and former Gov. Jim Florio, who either live or work in neighboring Warren County.
"I’m here," managed Scott MacKenzie, a member of Gregg’s inner circle.
The race between Gregg and Oroho was bitter. A 13-year veteran of the Assembly who wanted to move to the Upper House to take the place of his mentor – the moderate Sussex County Sen. Robert Littell – Gregg tilted way rightward in his campaign, only to find Littell’s daughter, Assemblywoman Alison McHose, Freeholder Oroho and their running mate, Freeholder Gary Chiusano, still father to the right, pounding him for a cigarette tax he once voted for, and tarring him as pro-illegal immigration because he refused to punish businesses that contracted with companies employing undocumented laborers.
Oroho trimmed Gregg, 9,523 to 9,133 votes overall, beating him by over 2,000 votes in Sussex County alone, which is the largest portion of the district and Oroho’s home-base. Gregg resides in Morris County.
In a veiled dig at family enemy Gregg, who challenged Littell’s ideological character, Republican Party chairman Tom Wilson reinforced Littell in his remarks. "This election is as much about preserving that legacy," Wilson said of the retiring senator.
He backed up Zeoli’s mission statement about keeping Democrats out of the county, acknowledging that while "it’s hard to go through a primary, "Republicans are 99 % alike and 100 % better than Democrats," and their politics of "greed and hate."
Wilson went after Gov. Jon Corzine, who he said is making the state a little less safe because he doesn’t believe "protecting human lives is as important as protecting bear’s lives."
Assemblywoman Alison McHose, whose husband is serving overseas, took a timeout from the tough guy talk. She likened the task before Republicans to what her son, who graduated from kindergarten on the night McHose was re-elected, faces as he strives with his classmates to learn "to respect each other and to respect ourselves." 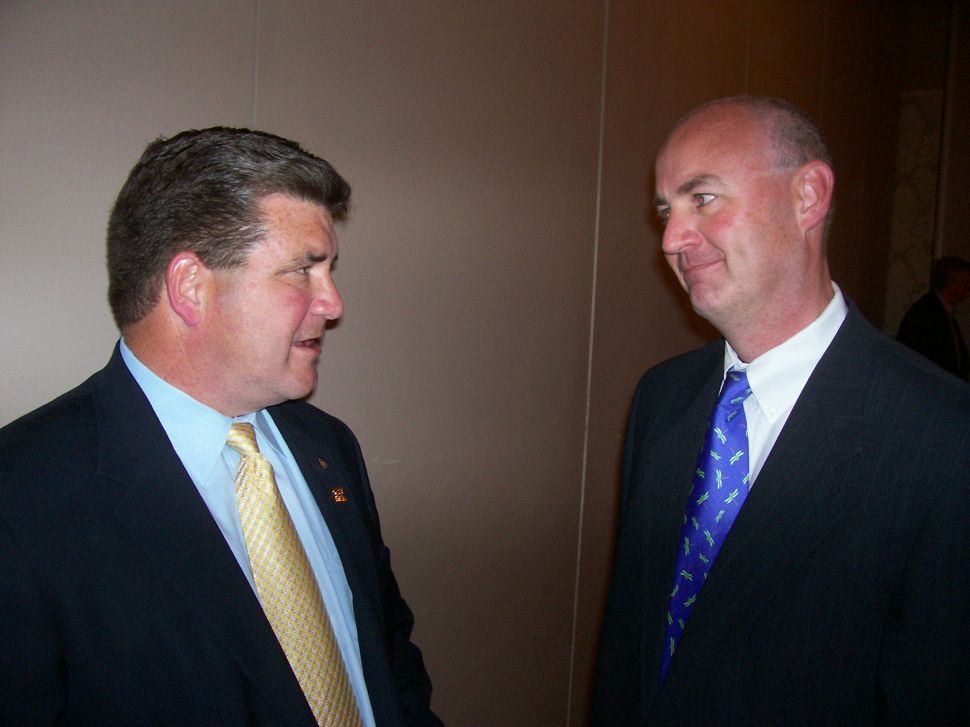