Age was an issue in a 1974 U.S. Senate race in North Dakota, where a popular 55-year-old former Governor challenged a beloved 76-year-old incumbent who had won more than 60% of the vote in each of his four re-election campaigns.

But more than thirty years later, William L. Guy says he no longer sees old age as a reason to force an incumbent into retirement.

Guy lost his Senate bid to GOP incumbent Milton Young by just 177 votes statewide. A TV ad would grind any apprehension about Young's age to a halt. The commercial depicted Young, an avid practitioner of the martial arts, karate chop a one-inch board in half with his bare hands.

While U.S. Sen. Frank Lautenberg feels that at 83 he's ready for six more years, a recent Quinnipiac University poll shows that 54% of New Jersey voters disagree, believing the Senator is "too old to effectively serve".

Short of donning a white robe and belt, Guy suggests that Lautenberg not be distracted by the age debate but continue to "run on ideas".

Does Guy think aging Senators should retire and let new people in the door?

“No, I’d say let the elderly run and let the people decide,” he told PoliticsNJ.com.

“Age is subjective," said Guy, who suggested that holding public office at an advanced age isn't for everyone. "I know a lot of older candidates who are still valuable, and others who are suffering.” 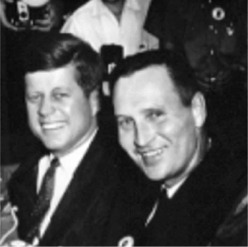