If she wins the June 2008 Republican primary, Anne Evans Estabrook would become the fifth woman to win a major party nomination for United States Senator. The first was Thelma Parkinson, who was just 32-years-old when Democrats nominated her to run in a Special Election for an unexpired term in 1930. She lost to Republican Dwight Morrow, the former United States Ambassador to Mexico and the father-in-law of aviator Charles Lindbergh. Parkinson, who later married State Senator Howard Sharp of Cumberland County, is the only woman to ever win a statewide Democratic primary.

Republicans nominated three woman for the U.S. Senate over a six-year period: Congresswoman Millicent Fenwick in 1982, Montclair Mayor Mary Mochary in 1984, and Board of Public Utilities President Christine Todd Whitman in 1990. Three other women were major contenders, but lost U.S. Senate primaries: Lillian Feickert, the President of the New Jersey Woman Suffrage Association and founder of the New Jersey League of Women Voters, who lost the 1928 GOP primary to Hamilton Fish Kean, the future Governor's grandfather; Princeton Mayor Barbara Boggs Sigmund, who lost the 1982 Democratic primary to Frank Lautenberg; and State Senator Diane Allen, who finished second in the Republican primary in 2002. 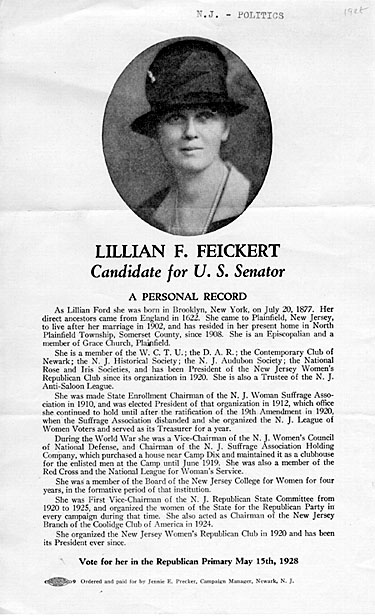