Mayor Cory Booker and his team arrived in office promising youthful vigor and now they’re the authority figures and the older generation of resistance-schooled Newarkers are still the fiery outsiders beating on the gates of power – even as they hold power.
And Newark is still battling.
In honor of the 44th anniversary of Martin Luther King’s "I Have a Dream" speech, the mayor and other city leaders revisited the Ivy Hill neighborhood in the West Ward on Tuesday evening to re-commit themselves to the fight against guns and gang violence in the wake of schoolyard executions here earlier this month that left three young Newarkers dead.

The old tensions between government and the individual were evident at this subdued rally in Ivy Hill Park; as people in the small crowd connected quietly with those suffering others whose children have also been killed.

The Rev. Jethro James told the gathering that the mayor and the police director and members of the sheriff’s department should have been in the park the night of the August 4th murders, and there were some hand claps to greet the minister.

"Where were you on the night the crimes took place?" James asked the government authority figures.

Moments later Booker urged the small crowd not to get angry, not to point the finger of blame – but to teach, coach and mentor. He looked fatigued as he invited the crowd to become one with him in forming Gideon’s army, a reference to the Biblical hero in Judges who vanquishes tremendous odds.

"We can achieve success," the mayor said.

When the mayor’s old nemesis Sen. Ron Rice was at the microphone, he used the sudden visual of a squad of Pop Warner football players trotting by to emphasize the need for the city to remain committed to key programs. The remark was an allusion to an incident earlier in the summer when Rice went to City Hall to protest the city’s proposed dismantling of the Drum and Bugle Corps. Rice said the Booker administration could afford to hire a new director of economic development and pay him a six figure salary, while cutting a key program for children – evidence in his view of misplaced priorities.

The senator’s son, West Ward Councilman Ron Rice, Jr., then reiterated with an exclamation point Booker’s call to the crowd, again not to get angry but to get involved. The councilman has established the West Ward Collective, which consists of non-profit organizations in 15 different areas, including crime and public safety, youth, ward block association, recreation, education, faith-based initiatives, ethnic diversity, Vailsburg Park Association, arts and culture.

"It is time to stop talking," said the younger Rice. "Join me in the revolution. It will not end until we offer our children an alternative to guns in our community."

A golf cart crept up to the edge of the gathering and a young county parks employee shook his head. "They all want to blame the mayor," he said. "But the fact is sometimes I can barely do my job – I work here – the kids are so disrespectful. I’m tired."

Sam Nash is a member of Street Warriors and an ally of a new group founded by community activist Sharlette Saunders called NEWARK (Needing Efficient Ways Against Ruthless Killing).

"When I heard about the murders I hurt as if each one of them were one of my own," Nash said.

Nash already did lose one of his own.

"Once I’ve collected enough shoes to create an effective exhibit, I would like to take the exhibit to various schools, youth centers, churches, and any organization dedicated to uplifting the lives of children and teens," she said.
She means to collect 3,792 pairs of shoes, signifying the number of American children and teens who died by gunfire in 1998 – the year her son was killed. She calls her mission "David’s Shoes." 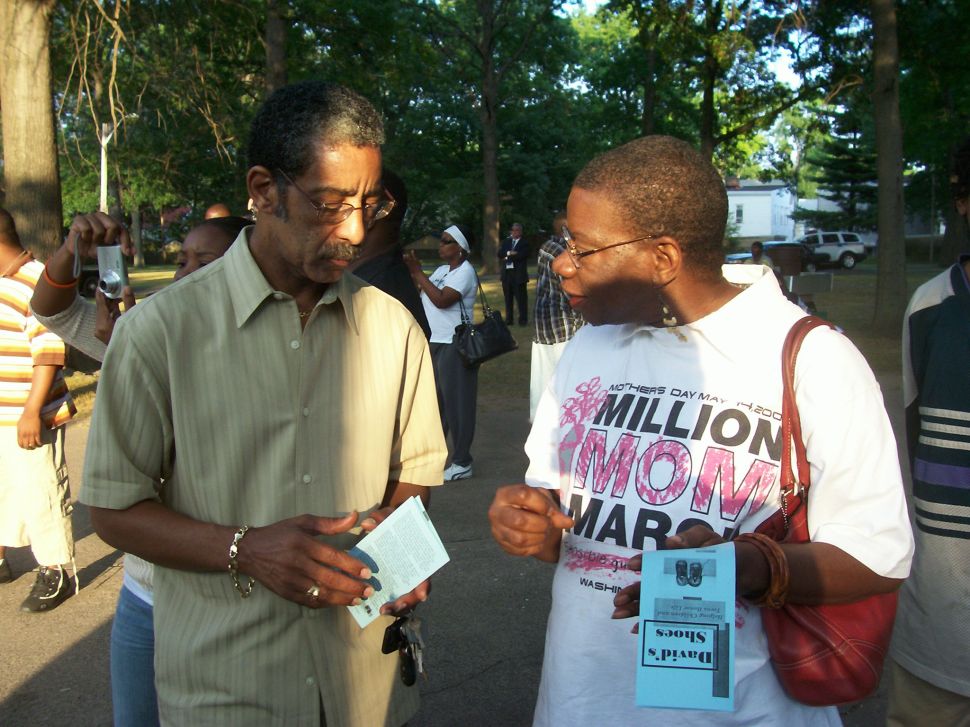