Leaders of Hillary Clinton’s New Jersey campaign organization are strongly denying rumors of internal strife and conflicts over the selection of lobbyist Karen Kominsky as her state campaign director, despite a push from key fundraisers to name Christy Davis-Jackson to the post.
The selection of Kominsky, a political veteran close to Gov. Jon Corzine, caused some bruised egos among the Clinton’s chief fundraisers last week, but it hasn’t caused discord in the campaign, one Clinton Finance Committee member told PoliticsNJ.com.
Sources say a group of major New Jersey Democratic fundraisers, who became known informally as “The Group” earlier this year because they agreed to back one presidential candidate, were disturbed about last week’s hiring of Kominsky to head the campaign over their first choice, Davis-Jackson. Davis is the wife of the Rev. Reginald Jackson, the Executive Director of the Black Ministers Council of New Jersey and a member of “the group.”
The fundraisers complained that they were not properly consulted on the pick, and found out about the decision through a press release, according to sources.
Another Clinton campaign advisor, lobbyist Harold Hodes, had strongly advocated for Kominsky, according to people familiar with the campaign. Corzine had also signed off on Kominsky over Davis-Jackson, who had been the Co-Campaign Manager of his 2000 U.S. Senate primary campaign.
But John F.X. Graham, a Co-Chairman of Clinton’s State Finance Committee, was quick to dismiss any talk of a split or power struggle in the campaign.
“People misread things and make it a divisive thing,” said Graham. “That happens because we’re riding so high right now. People want to put a worm in the apple.”
Graham said that he initially supported Davis-Jackson, who he believed was most qualified for the job and could have helped court the state’s African-American vote. He was not very familiar with Kominsky before her selection, but warmed to her almost immediately.
“At first there was a feeling, maybe anticipation and disappointment,” said Graham. But now that he’s talked to Kominsky, Graham said his worries have abated. “She turned out to be an excellent choice. She’s been very cooperative, understanding and smart. I didn’t know her at the beginning and I know her now.”
Graham denied any infighting, saying that he understands that Corzine runs the political end of the campaign.
“We’d be cutting our nose off not to want the governor to lead the delegation,” said Graham.
Another major fundraiser, Michael Kempner, said that any disagreement between the “The Group” and the governor had blown over.
“My opinion is that while Christy would have been a great candidate, Karen Kominsky is also a terrific candidate,” said Kempner. “I think people are much closer together than they are apart.”
Kominsky, a former Deputy Chief of Staff to Gov. James E. McGreevey and the wife of Hunterdon County Democratic Chairman David Del Vecchio, seemed unaware of any spat over her hiring. “I’ve received a warm welcome from everyone,” she said. 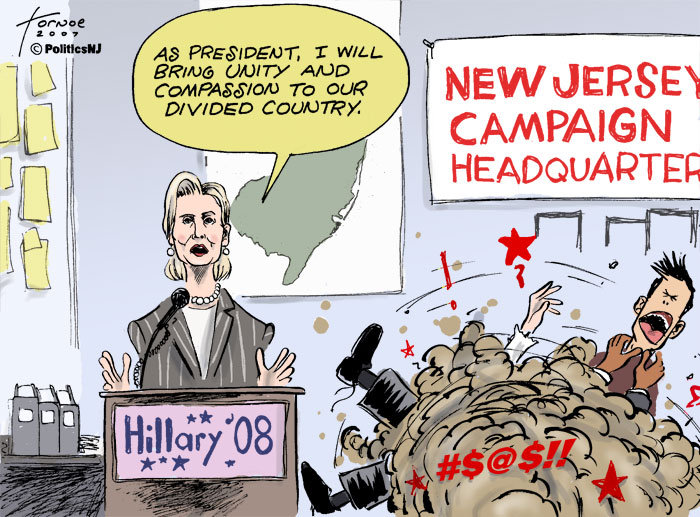