The political debate in Newark hinges on the fate of the city’s most vulnerable populations, including the elderly, the disabled, the homeless and young people. Pressed together by external forces, they are often pitted against one another, as young adults who qualify through a disability for Section 8 housing live in dwellings also inhabited by retirees, or as homeless people young and old pushing shopping carts on sidewalks come up against young gangs looking to control the streets.

The strong intimidate the weak. The young overpower the old inevitably.

Trying to change the dynamic so youths become as often as possible a life-giving force is the particular mission of YouthBuild Newark, which works with 60 young Newarkers annually, most of whom are either on probation or parole. The federally funded program spear-headed by Sen. John Kerry uses construction as a vehicle, enabling Newarkers between the ages of 16-24 to build homes and build a skill as they re-enter the city after incarceration.

"It’s taught me to put certain priorities first," says Stephen Demby, Jr., who was born in the South Ward and moved to the West Ward when he was 12. "Here I’ve learned sheet-rocking, framing, plumbing, When I leave here my first choice for a career is plumbing."

He and Fuquan Scales are taking a break from work on a house in the South Ward, envisioned as an anchor home in a revitalized neighborhood.

"I’m gaining a better understanding of how to do things," says Scales, who like Demby was born and raised not far from here in the South Ward.

"Construction can take me a long way," adds Scales. "I can work for my own money. I know how to do spackling, framing, a lot of things. I did those steps you’re sitting on. This is my 11th month in the program. The next step is getting my own construction business, my license and my own house, hopefully."

Under the direct supervision of foreman Randy McMasters in their case, these young men and others like them build homes for the old and for single mothers. Whatever their particular backgrounds, whatever their gang affiliations or past disaffections, they bind together amid the hammers and power drills around the culture of work.

"We are engaged in a united struggle to overcome the social, political, economic, educational and spiritual inequities, which threaten to destroy us as a people," reads YouthBuild’s mission statement. "We recognize that, as young people, we are one of the greatest resources available to the survival of the community."

There are other groups involved in similar projects: the massive North Ward Center with its jobs training, recreation and educational programs, and SOS or Save Ourselves, a Ras Baraka offering in the South Ward, which seeks resolutions to gang violence, and many others.

"These kids want to feel like they’re part of something," says Robert Clark, executive director of YouthBuild Newark, who’s been down on the ground in this city for four years. Himself a product of YouthBuild, he says he’s encouraged by the support he’s received from the new administration.

Mayor Cory Booker took a public flogging last week in the aftermath of the administration’s failure to deliver checks on time to the city’s 2,100 young summer employees, an oversight the mayor’s defenders say was based on the administration trying to enthusiastically cram as many youths as possible into the city’s own YouthWorks program.

"I think the reality is it’s going to be much more difficult to solve the problems of this city than the administration initially anticipated," says Baraka, a former deputy mayor and political opponent of Booker’s, referring to the outcry following the checks crisis.

The news on the public safety front was far worse than most days this past weekend, as three college-aged young people – Deshawn Harvey, Terrance Aeriel and Ofemi Hightower – were shot execution-style in a school playground, bringing the number of homicides in the city in 2007 to 60, or three fewer than at this time last year, according to the Star-Ledger.

During a week of bad news for this city, from his vantage point downtown where he oversees YouthBuild projects on worksites around Newark, Clark last Thursday spoke favorably of the overriding attitude and commitment to youth he says he sees coming out of City Hall. With the streets riven by gang violence and a war simultaneously going on in the Middle East, the times are lean for goodwill federal programs aimed at young people of all ages in urban America.

"We have had budget cuts, yes," says Beverly Lynn of Head Start in Newark, which survives on a combination of federal and state Abbott funds for its childhood education programs. "We had a 2% cut last year in federal funding, and we have had to go into our budget to see what we could cut, and it was mostly staff raises."

Clark says the local government support he has received in the last year has been critical.

"There’s heart in this administration," says the executive director. "As a resident of this city, that’s all I can ask for. I see a mayor putting his best foot forward for the young people."

Hoping to provide a communal living space for YouthBuild Newark, the Booker administration is giving a city building on South Orange Avenue in the West Ward to the group, in part through its own participation in the federal HOME program. Right now the building is abandoned, but in the near future Clark hopes to be able to house seven or eight of his workers there, so they can live in community.

"These are kids who have been through crisis," Clark says of his work force. "In a lot of cases, not only do these young men have records, but they can’t read. If somebody doesn’t teach them, then they don’t know. We recruit; we go to places like the Jamesburg Juvenile Facility to give young people the option. We strive for it to be an organic thing rather than a judge ordering them to go into the program."

The presence of federal programs like YouthBuild sometimes collides and sometimes meshes with the street-level organizations that already exist in the city, whose proximity and particular ends set up other political battle lines. The war for the dispossessed becomes a taffy pull between federal and grassroots organizations, between programs mounted by groups with older political loyalties, and those with a boot-in-the-door Booker affiliation.

In the end, the aim is the same.

"I saw the mayor jogging the other day," Newark resident and community activist Russell Yancey told the Newark City Council last Wednesday. "I told him, ‘Don’t forget the poor,’ and he shouted back to me, ‘Amen.’"

For the long-time residents, the street battlers from eras past, the success of any focused pool of programs for young people in need ultimately depends on whether those youths on worksites today can believe through long months of labor that they will be able to afford to own homes like the ones they’re building; that their efforts are all of a piece with a city reborn, their hopes a living part of the new infrastructure.

"We are very optimistic," says Clark, driving from worksite to worksite in the neighborhoods of Newark. 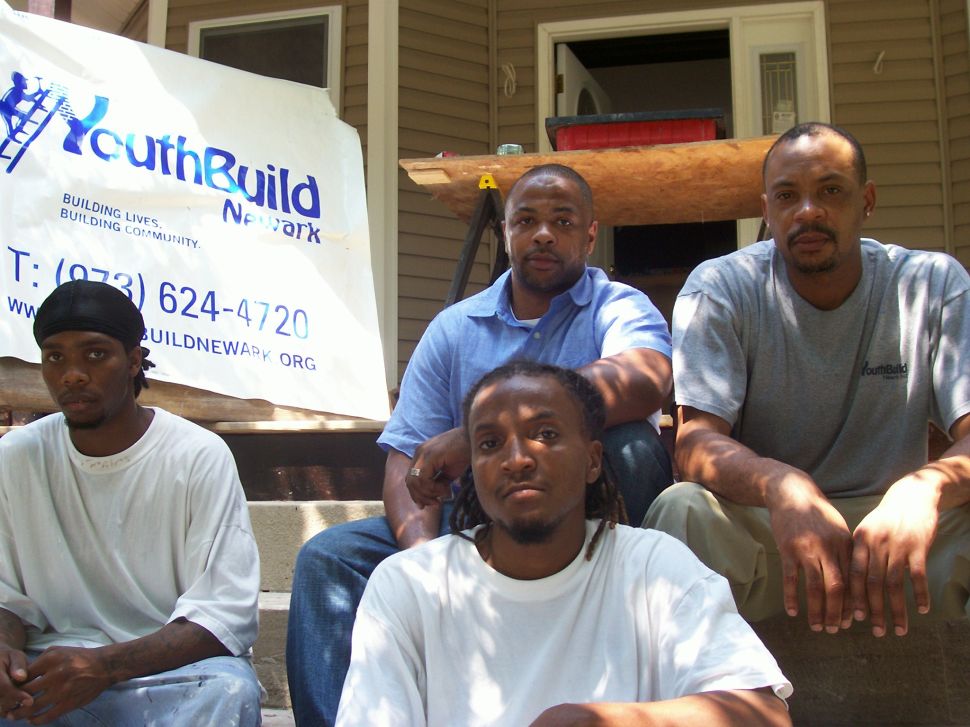