Former State Senate President Wesley L. Lance was buried Thursday "in the same Hunterdon County soil that so many of his ancestors farmed," in the words of his son, Senate Minority Leonard Lance, who eulogized his father in the Spruce Run Evangelical Lutheran Zion Church.

Lance, who was believed to be the oldest living former State Senator, died on Saturday. He was 99.

The church in Glen Gardner was where the late Republican politician was baptized. Pastor Rev. Gary V. Ettlemeyer said the congregation formed in 1774, and installed its first pastor in 1775. The building that exists today rose in 1870.

"We like to think we’re part of Wesley’s history," the pastor said of the man born in 1908, who lived just shy of a century. On Wednesday, 700 people attended his viewing, and Acting Gov. Richard J. Codey ordered flags flown at half staff.

Delivering the eulogy on Thursday, Lance said his father was the product of a dual party home. The Lances were Democrats. The Smiths were Republicans, and though Wesley became a Republican in line with his mother’s side, he cultivated a spirit of bipartisanship in public life. Thrifty to a fault, he graduated from Hampton High School at fourteen, and later told his sons he had skipped so many grades because he had no intention of wasting the taxpayers’ money.

Lance graduated from Lafayette College in 1928. His son told the congregation that when the Lance family called the college to inform the dean of the old man’s passing, they were told Wesley Lance had been the last surviving member of his class. He graduated from Harvard Law School in 1935. Years later he happily recalled his favorite teachers: Bill Coughlin, the former big league ballplayer and World Series veteran (1907, ‘08), who was one of his coaches at Lafayette in his favorite sport; and Felix Frankfurter, who taught him law at Harvard. Appointed to the U.S. Supreme Court in 1939, the socially liberal but strict constructionist Frankfurter was in the majority that ruled against school segregation in the case of Brown v. Board of Education.

He attended the trial of the century in the Hunterdon County Courthouse in 1935, when a jury found Bruno Hauptmann guilty of kidnaping the son of aviator Charles Lindbergh. When Lance’s children asked him how he got into the packed courthouse, the old politician quipped, "$20 to the sheriff hadn’t hurt."

Elected to the Assembly in the 1930’s and to the Senate in 1941, the still single Wesley Lance felt obliged to put on a uniform in WWII. In addition to teaching navigation, he served aboard the U.S.S. Boxer. "He couldn’t swim a stroke," said Leonard Lance. "And when we asked him what he would have done if the Japanese torpedoed the ship, he replied, ‘That’s what life jackets are for.’"

Back from the war, Lance participated in the state’s 1947 Constitutional Convention. "It was sixty summers ago, and sixty summers from now we will still be governed by this magnificent document," Lance said.

In 1959, the elder Lance, again serving in the Senate, was elected Senate President, and developed a reputation for fair-handedness in working issues relating to anti-discrimination, redevelopment and urban rail transportation.

Twice married, the lifelong American League baseball fan Lance spent most of his life in the little Hunterdon County town of Glen Gardner, site of the church, called a "profoundly rural part of this state" by Leonard Lance.

The soil of Hunterdon in the family plot in Glen Gardner is a long way from the Lafayette Baseball Diamond, Harvard Yard, and the deck of an aircraft carrier and the rostrum of the senate. "But," said Lance, "clearly it is the place where his mortal remains should rest as his soul is given to the arms of God." 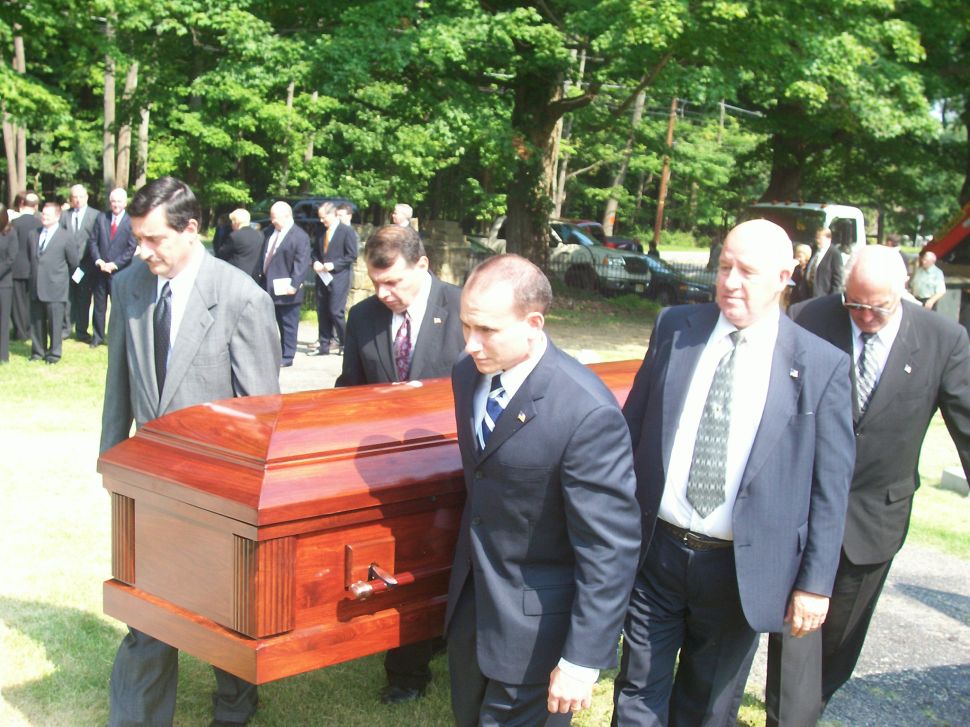