Each started out in the party of the other, and now 8th district State Senate candidates Fran Bodine and Phil Haines stare from their adopted battlements at the remnants of the parties they left behind – or that left them – or that really no longer exist.

The Burlington County Clerk, Haines, shakes his head in cheery bewilderment as he considers Bodine’s Benedict Arnold moment last spring, when the 14-year Assemblyman stood with U.S. Rep. Bob Andrews to announce his defection from the GOP ranks to run for state Senate as a Democrat.

Bodine likewise won’t accept an invitation to reflect on the Burlington County politicians’ mutual pasts without reminding the listener of Haines’ political beginnings. "I really got to know Phil back when he was a Democrat," muses Bodine.

Haines admits his father was a Democratic Party freeholder who once sat on a stage in Willingboro Plaza with John F. Kennedy. He even sheepishly confesses that he voted for George McGovern in 1972. But Haines says that by the time the 1990s arrived, the party of P2-109 skipper Kennedy and bomber pilot turned-peacenik McGovern had abandoned him.

"I support the typical small government approach," said Haines, a veteran of the Army National Guard. "I felt the Republican Party at the time – and I still do – is the best expression of that belief."

Given the history of this Republican-leaning district, home of the U.S. Army’s Fort Dix and two-thirds Pinelands, Haines and his supporters believe that even if a lot of voters recognize the name "Bodine" they’re going to see a "D" alongside of it and reflexively punch the "R" button. It doesn’t hurt that Haines’ family farmed in Burlington going back to 1675.

But the Democrats gleefully highlight Burlington County’s W-assisted tilt in recent years into their party’s column, a phenomenon epitomized by a Democratic Party municipal romp in Evesham in the spring that left Councilwoman Debbie Sarcone the lone-standing Republican. Plucking Bodine out of no-man’s land after Republican leaders flatly told the assemblyman that he wouldn’t be the senate candidate to replace Martha Bark, the Democrats feel they’ve pulled off a coup for conservatism.

"Fran’s been a champion of 0-based budgeting," says Dems campaign spokesman Peter Clerkin. "He voted for Whitman tax cuts and against Democratic budgets."

Haines, meanwhile, says there are the same number of people working in his clerk’s office as in 2000, and believes his own essentially conservative, friendly, blurred-party line approach has endeared him to voters here.

"I have traditionally won in each of the district’s 17 towns," including Pemberton, the 8th’s most Democratic town, says Haines, who lives in Springfield and has served as clerk since 2000. As for the Democrats’ revolution in Evesham, the County Clerk points out that one of his Assembly running mates, Freeholder Dawn Addiego, is from the town – and certain to draw votes there come Nov. 6th.

Addiego, one half of the GOP’s district 8 Assembly ticket that also includes Medford Councilman Scott Rudder, has already taken the point in riding Bodine over his membership at the all-male Pine Valley Golf Club.

"You are in a position to convince the organization to abandon its policy of discrimination against women and to accept females as members," Addiego wrote to Bodine. "Your failure to do so is disappointing and can only be construed to mean that you favor the club’s discriminatory practice."

She further lectured the veteran Assemblyman and state Senate candidate: "Discrimination in any form is abhorrent and contrary to the foundation which supports our free society. As an elected official of state government, you have a sworn duty to oppose and correct bias and discrimination wherever it exists. Yet, despite that obligation, you have maintained your membership in an organization whose stated official policy discriminates against women."

She then called on Bodine to renounce his membership at the club, prompting Bodine to retort, "On numerous occasions, she has asked me to take her husband to play golf there."

It’s not the first time his favorite pastime has been an issue for the Assemblyman, a veteran of the U.S. Army, who after switching parties found himself the subject of a still image on PoliticsNJ.com, caught with a golf magazine propped in front of himself in the Assembly chamber. Branded by his former party as an indulgent golfer, Bodine says he hopes the shot wasn’t a frame-up – but at the very least says it was taken out of context.

"I was sitting there," he says. "I’ve never taken a magazine or book into the Assembly, and an Assemblyman friend of mine said, ‘That’s the new driver I just bought.’ I’m sitting there with magazine and someone snapped a picture of me reading a golf magazine."

Haines says, "I don’t play golf. I enjoying working outside." The more entrenched member of his adopted party in a Republican district, with the additional benefit of being an AFL-CIO-endorsed candidate, Haines is confident.

Dems say he moonlights as a real estate attorney, which the candidate says isn't true. Legal work he did in his first years as clerk amounted tocarry-over cases in which herepresented100s of clients, he insists.

"I phased my private practice out to the point where I have one source of income now and in '06," Haines says. "In 2005, I think I had about $1,300 worth of income from law. From the beginning this has been a full time job for me. I don't have clients now, but I have not officially given up the law because in this business (of politics) I may have to go to the law someday."

Bodine, meanwhile, trusts that his record of fiscal discipline will pull voters from all affiliations – and send Haines back permanently into the law.

"My observation of the way the vote will go for me is I feel confident Democrats will vote for me," says Bodine of base supporters in his new party. "Independents lean toward the Democrats. Then there are a small percentage of Republicans who think enough of me who recognize I’m the same guy I was."

First elected to the Moorestown Council in 1976, Bodine served as Mayor of Moorestown, and worked his way up from Freeholder to Assemblyman. He tops a ticket with businessman Chris Fifis and Mount Laurel Councilwoman Tracy Riley.

The spin from the Democrats is that an affronted Bodine left his party because of the scandals, most notably the Burlington County Bridge Commission debacle, which has Democrats salivating over the presence on the political landscape of State GOP Chairman Tom Wilson.

But the easy-going Bodine, who lends his consulting prowess to businesses that seek better understanding of state regulations, admits he left Paulsen’s camp when it became apparent that he wouldn’t be Bark's successor. "The reality is that although I was a member of the Republican Party, I was never a member of the inner circle," he says. "I was a person who could deliver votes, but I could not be told what to do. Certain things took place, and I was not on the inside. I would learn it from the newspaper."

Representing the more conservative portion of a county that voted for Kerry over Bush, Bodine admits the performance of the Republican President played no role in his decision to change parties.

Says Haines, "I voted for Bush. Fran voted for him too. The Bush factor is there, I don’t know how many points plus or minus."

Two pleasant, Burlington County diehards who admit to being friends, Bodine and Haines’ doppelganger candidacies ultimately hinge on whichever party has the bigger bank account down the stretch of these last five weeks to convince voters of the inherent conservatism of each man. 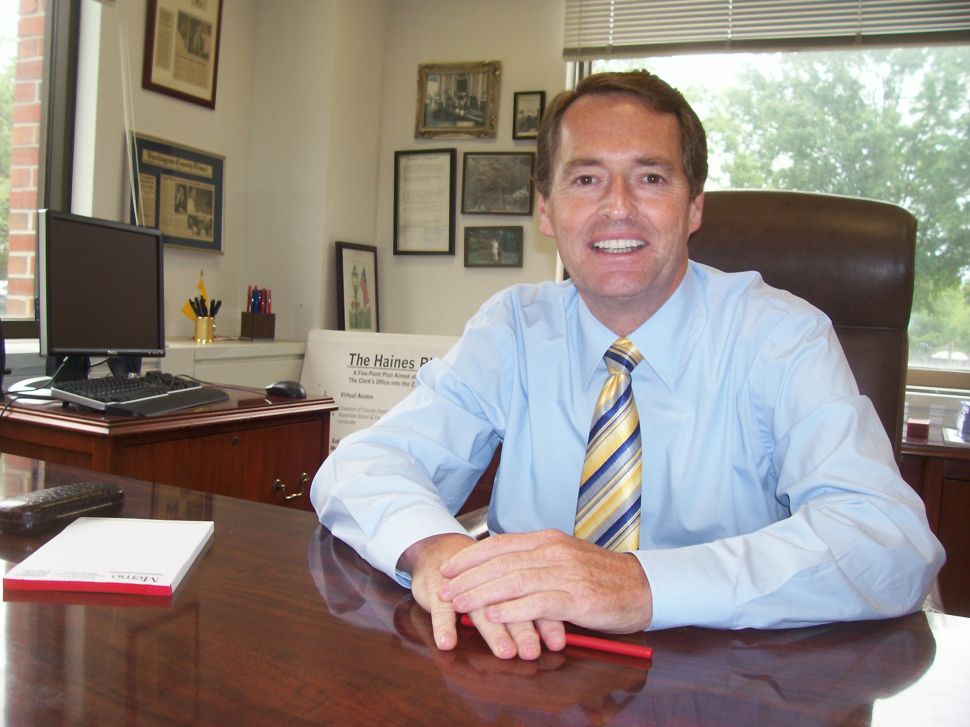