The Absecon Channel separates Brigantine from Atlantic City in this world of salt water and low-slung housing broken up by tragicomic human silos with names like Taj and Showboat.

But it’s all the same battlefield here in the 2nd district, where forces are mobilizing for Sen. (and Egg Harbor Township Mayor) James "Sonny" McCullough or Assemblyman James Whelan.

In Atlantic City, a second tall and bearded politician joins Team Whelan today in a senior citizens complex on Atlantic Avenue. It’s Gov. Jon Corzine, who knows seniors are a critical voting block, particularly in an off-election year like this, and he’s working the older crowd overtime with his best up-close-and-personal demeanor.

"We are here to make sure the social safety net stays in place," says the governor. "Republican cuts would hurt cities like Atlantic City."

On the northern side of the bay in Brigantine, the Republicans think the governor’s presence here will sink the opposition. "I can’t believe they’d bring Corzine in here," says Jim O’Neill, a Republican candidate for council in Linwood. "That can’t help."

In front of one of the local Wawas, Assemblyman Jon Bramnick meets the outstretched hand of a stranger and says, "Hello, Jon Bramnick – supporting John Amodeo Vince Polistina for the Assembly," as he directs the man’s attention to the two GOP candidates.

Zipped up in jackets, the Republicans are juggling coffee cups against the wind in what feels like a hard transition into late autumn. Amodeo and Polistina are going to work the door here for a little while with Bramnick and then go door-to-door in Brigantine.

"He’s a big inspiration, and he’s very confident that Vince and I are going to get into the Assembly," Amodeo says of the district 21 assemblyman.

As the Republican Party’s whip, Bramnick has been moving around the state in this election cycle and helping Legislative candidates like Amodeo and Polistina. He’s also traveled to Bergen, Sussex, Monmouth and Ocean in this cycle, and in the process he’s feeling out the terrain for a potential U.S. Senate run in ’08.

Bramnick wrote a personal check of $2,000 to Amodeo and Polistina on Sunday, and dished a similar amount of money into other districts.

"These guys will probably win," Bramnick says of McCullough’s running mates, who are up against Whelan’s allies, Blondell Spellman and Joe Wilkins.

"We want to make sure they win," he adds.

Corzine’s working the same angle back on that other side of the bridge, with a heavy emphasis on Whelan, a former mayor of Atlantic City elected two years ago to the Assembly.

"They have great confidence in Assemblyman Whelan," Corzine says of the people he has encountered in Atlantic City, both at the senior center and at the Second Baptist Church, where Corzine and Whelan made remarks earlier in the day. The Democrats, he insists, are committed to seniors, to the African-American community, jobs and affordable housing.

The governor says he does not regret putting in play in this election the issue of selling or leasing the state’s toll roads, an unpopular idea that Whelan does not support.

"I have an obligation," the governor says, "to review the financial condition of the state and to make it less burdensome."

With a two-arms across the body wave goodbye to the seniors, Corzine’s out the door with his entourage, and Whelan meanwhile ricochets in another direction with Spellman and Wilkins bringing up the rear. Again it’s fall, which means football and in the Fourth Ward there’s a big regional playoffs tournament going down and kids so small they look lost under their shoulder pads, and they crack into each other on the grid amid the exhortations of the local AC Dolphins fans.

Almost everyone knows Whelan here, the Philly kid who married an Atlantic City girl, who used to get a table in an Italian restaurant in another part of the city not because he was mayor, he says, but because his wife babysat the owners’ children.

But where there are young people in this town, playing football in the street or on public land or cruising a rough path into adulthood, there are those who know and recognize the lanky ex-mayor, mostly because he’s a swim teacher in the Atlantic City School System.

A group of teenagers on the sideline is asked impromptu what they think of him and they all say he was a great teacher.

In the cadre of Whelan campaign diehards, there’s happiness hidden by mirror back sunglasses in the person of Team Whelan spokesman Raiyan Syed, who says it’s significant the Press of Atlantic City backed his man over McCullough in its editorial today.

"Whelan has a proven track record of creating jobs and revitalizing the inlet," says Syed. "When he was mayor, crime went down in the city."

With the attack ads blaring on radios in every diner and on TV sets and a little more than a week to go before Election day, the race may come down to who has proved to the voters that he can be the shrewder negotiator for a district where the gaming and tourism industry is the undisputed economic engine, and where the senator here has historically loomed large on that front.

It’s not only jobs.

The Republicans say they would be more aggressive in obtaining a lion’s share of CRDA dollars for the 2nd district, not just for Atlantic City but for the so-called Pineland growth areas like Egg Harbor Township, where McCullough says state environmental laws have resulted in a nearly haphazard bulldozing of his beloved hometown.

It’s morphed into the municipality down here with the largest population, and McCullough could use some state funding from the casinos to help properly manage the growth.

But McCullough is short on specifics, says Whelan, who in a break from the whirlwind of events charges his opponent with living in storybook land, a phrase he borrows from running mate Wilkins.

"Who from Atlantic County would be against that?" he says of the Republicans’ promise to keep more CRDA monies in the district. "But anyone with any sense knows that’s not going to happen. The answer to getting more CRDA money is to build new casinos. The first three years you get 100% (CRDA dollars) for Atlantic City, and that much more for South Jersey, and Atlantic County will get its fair share."

Whelan says the opposition gives no indication that they could build consensus to the advantage of district 2 on key issues that often pit North against South Jersey interests.

"They say, ‘We’re not going to let the tracks get any money that the casinos have been providing in the past,’" says Whelan of McCullough and the Republicans. "Ok. Fine, let’s keep that $80 million here. But is the trade off going to be you get VLTs (video lottery terminals) in the Meadowlands? (And the Republicans’ response is), ‘No, we’re going to fight against VLTs in the Meadowlands.’ Well, again, I live in the real world, and it does not work that way."

On the sidelines of the Dolphins game, Whelan is soon absorbed into the fold of old friends.

Over in Brigantine, a short time before he will welcome U.S. Rep. Frank LoBiondo in to campaign with him, McCullough’s working another crowd. Four months ago, they didn’t give him a chance to be in this fight with Whelan, but it is a fight now, and he notes with a certain pride of Corzine’s presence over there in Atlantic City, "You know they have to be concerned to bring him out on a Sunday."

He’s already been to the Brigantine Halloween Parade with Amodeo and Polistina and now the district 2 senator and longest serving mayor of Egg Harbor Township heads into a pack of people on the sideline of a football game between the Brigantine Rams and visiting Northfield.

Down by down, the Rams are taking Northfield apart, and it isn’t long before the score is 26-0, and the Rams’ cheerleaders are providing the main attraction.

"We have schools funding issues here, and we’ve got riparian tax issues," says longtime Brigantine Mayor Philip Guenther. "Sonny’s been working on that, trying to make sense of the Tidelands council. So has Whelan."

McCullough narrows the issue here down to two words.

A roar rises from the crowd, and with Northfield vanquished, there’s another game in the tournament upcoming and just before it begins, head coach and organizer Mike Morgan asks the senator if he’ll say a few words to the fans, and the affable McCullough agrees.

A moment later he’s in the crow’s nest with the announcers, overlooking the football field and the young players mobilizing for battle.

"I coached for many years in my town of Egg Harbor Township," McCullough says into the microphone, and then he expresses his wishes for a good game between two great teams and says he hopes no one will get hurt. 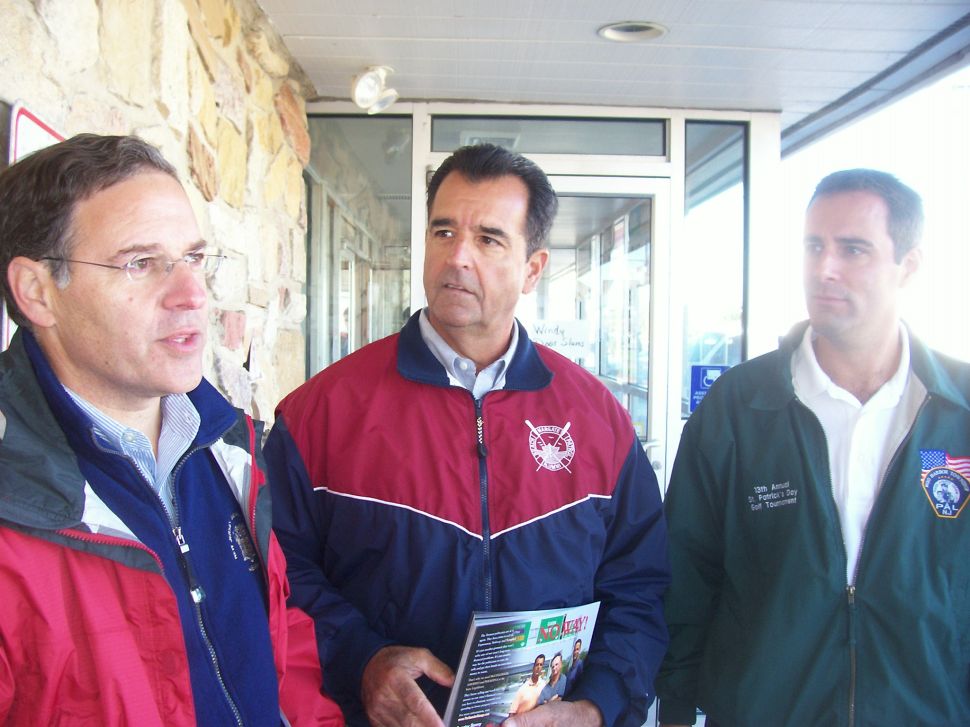