"I talk to John Kerry all the time, and he wishes he fought back harder," Lautenberg said of the failed 2004 Democratic Presidential nominee, who was Swift-boated by a right wing attack machine.

Greenstein, along with Singh’s Republican opponent, Assemblyman Bill Baroni, was part of the working group that established the Fair and Clean Elections pilot program in an effort to keep special interest money out of this race. The candidates had to collect at least 400 donations of $10 apiece in order to qualify for public funds, and submit to a grueling schedule of ten debate forums.

Now a group that calls itself Common Sense America is attacking Greenstein in radio ads and mail pieces, the latest of which hit mailboxes Friday and is the first to tout the names of Greenstein’s opponents: Adam Bushman and Tom Goodwin.

The mailer slams Greenstein for raising taxes, and trumpets Goodwin and Bushman as candidates who "are fighting to cut wasteful spending, eliminate corruption and deliver property tax relief for New Jersey families."

The man on the ground here for Common Sense America is Brian Brown, executive director of the James Dobson-affiliated National Organization for Marriage (NOM), who recently moved to Princeton. NOM’s president is Maggie Gallagher, who received money from the Bush administration to write favorable columns in newspapers about the President’s family initiatives.

"This group has spent hundreds of thousands of dollars, according to recent news reports, to inflict their right-wing agenda on this district," Greenstein said of Common Sense America, whose anti-Greenstein radio ad buy on WKXW (NJ 101.5 fm) cost $125,000; and whose television commercials and mailers cost approximately $86,000.

"This group and their leaders refuse to face the people in this district," said the assemblywoman. "The people of New Jersey have consistently called upon their leaders to clean up politics. That’s why I fought so hard for the Clean Elections Program. For the past two weeks, however, we’ve watched Common Sense America thumb their noses at Clean Elections and the wishes of the voters here."

Baroni and his running mates reiterated their wish that Brown and his group would go away.

Said Bushman: "We didn't have any idea they were running these ads. They shouldn't be speaking for me."

Contacted at his office, Brown reiterated his argument that his First Amendment right to free speech allows him to run the ads, in defiance of calls from both parties for him to cease and desist.

"This is America," he said. "We’re allowed to do this. The (Fair and Clean Elections) program is fundamentally flawed. On Election Day, the people will decide."

Greenstein, her running mates and Lautenberg agreed with that last sentiment, at least.

"I’m confident that the intelligent voters of this district will see through the vicious attacks of this special interest group and send a message on Election Day to support our ticket," Greenstein said.

After regaling a crowd of seniors here, Lautenberg stepped up to a podium to speak following remarks by Greenstein and her running mates.

"Groups like Common Sense America and their benefactors are hiding in the shadows as they try to force their narrow-minded views on the people of New Jersey and meddle in our state’s elections," said the senator. "These attack ads are mocking the Clean Elections Program in an effort to promote a right-wing Republican agenda at all costs. We’ve seen these groups infiltrate other elections and other states. The people of New Jersey deserve better than to let it happen here." 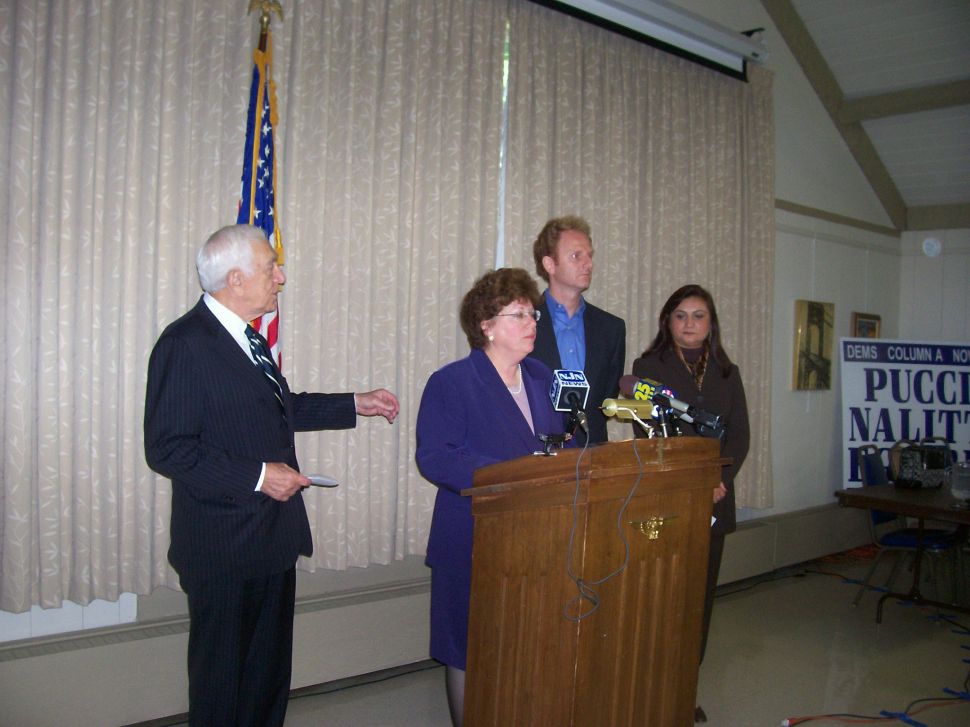