When Essex County Executive Joseph DiVincenzo found out this morning that the name "Luis Quintana"' was on a Senate Judiciary to-do list, he angrily reached for a telephone and called the governor's office.

DiVincenzo wanted to know what Quintana was doing on the list months after he thought he made it clear to Gov. Jon Corzine that the at-large Newark councilman should not be considered for an appointment to the Passaic Valley Sewerage Commission.

It's a part-time position with pension and benefits, but more importantly it's a power position where big money contracts are administered as part of the oversight of one of the country's largest wastewater treatment plants.

DiVincenzo didn't think it was right for Quintana, who spent months fomenting resistance to the Democratic Party ticket and bad-mouthing the party's district 29 state Senate candidate, M. Teresa Ruiz, only to run aground on Election Day in his own independent senate bid, to now be rewarded with the appointment by the Democratically-controlled Senate Judiciary Committee.

The county exec sounded off to the governor in the morning, but the matter wouldn't die there – not yet.

Having received the support of senators Sharpe James and Nia Gill and Senate President Richard Codey for the Quintana appointment, Sen. Ronald Rice had personally submitted Quintana's name to the judiciary committee. When Rice found out about DiVincenzo's objection today, he demanded his own interview with Corzine.

"The governor told me (DiVincenzo chief of staff) Phil Alagia called him and (Senate Judiciary Committee Chairman John) Adler got calls," said Rice, the independent district 28 senator from the West Ward. "I told him I wanted to speak to him as one marine to another. This is about the democratic process. It's not about Joe DiVincenzo and Steve Adubato dictating to the governor who's going to be on the commission. It's about a specific and important democratic process."

Rice emerged from his meeting with the govenror with the unfortunate impression that Corzine had already made up his mind to kill the appointment. The district 28 senator went to the Senate Judiciary Committee meeting anyway to make his case directly to Adler and the other senators.

Pointing out that it was a break from protocol, Adler reluctantly allowed him to speak.

"This particular nominee was signed off on," Rice told the judiciary committee. "But because he got involved in an election the powers-that-be have determined that he's no good. As a senator, I cannot allow political operatives to influence the decisions you make. I met with the governor's people. I can't allow them to do this without fighting back. I'm asking you as a senator for 22 years. Do not hold this nominee."

Sen. Robert Martin told Rice he disagreed with some of what he said, and objected to Quintana not for any personal reason but because the at-large councilman already holds one public job.

"It's difficult for him to do a good job as a dual-office holder," Martin said. Informed that the position is generally filled by someone from Newark with a public position, the Republican senator said the legislative body is trying to commit to a higher standard of ethics.

"I have some concern that we listen to the taxpayers," the chairman said, referring to what would be Quintana's dual-office holding status if the committee appointed him to the sewerage commission. "I have cost concerns I'm going to focus on as the days and weeks go by."

Rice protested, but Adler said he was done. He called a vote, and senators Ray Lesniak and Jack Girgenti backed Quintana. Senators Thomas Kean, Jr., and Robert Martin voted against him. Everyone else abstained.

That was enough to ax the appointment.

Coming away from the episode, Rice had harsh words not only for North Ward boss Adubato and DiVinzenco but for his old nemesis in the Newark mayor's office, Cory Booker, whom he said is preparing to submit the name of one of his confidants to the position.

"What's going on here is unless the committee and the governor act as a rubber stamp, Steve and Joe and people like Cory are going to try to intimidate," said Rice. "I'm tired of it. I wanted to let the governor know today that he started off on the wrong foot."

Later, in the hallway outside the senate Democrats' caucus chamber where Ruiz, who serves as DiVincenzo's deputy chief of staff, was ensconced with other senators and senators-elect deciding on the party's new majority leader, DiVincenzo's chief-of-staff Alagia said bucking the Quintana nomination was a no-brainer.

"This is a guy during the campaign who said bad things about Teresa – personal things," said Alagia. "He ran against the party in an effort to divide the party. Why would a Democratic governor and a senate judiciary committee chaired by a Democrat move the nomination of someone with that kind of profile?" 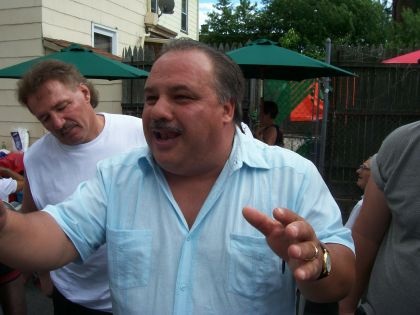