Susan Berkowitz of Parsippany has been on the street in front of the Morristown Green every Friday evening for six years, protesting war in the Middle East.

As part of her activist efforts, she attends nearly every area march or action. In Lincoln Park this summer she made cranes for peace for little Newark girls and walked after the 2004 presidential election from Pedro Francisco Park to the southern end of Broad Street to place shoes on the steps of City Hall in honor of the American dead.

"Where are you from," she's asked.

That also figures. Going back to Paine, Whitman and Crane, almost every Jersey radical has some kind of ties to Newark or Brooklyn and it turns out Berkowitz has ties to both.

Her husband, Elliott Schwartz, is from Manhattan and grew up in Jersey.

"I actually went to this high school for one year," he says, standing in the cafeteria of Columbia High in Maplewood on Saturday where N.J. Peace Action is celebrating its 50th anniversary with a soup luncheon featuring a speech and presentation by conscientious objector Staff Sgt. Camillo Mejia, author of the book, "The Road from ar Ramadi: The Private Rebellion of Camillo Mejia."

Looking at the crowd, it's hard not to notice that most are either old or almost old. In an assembly of over 200, you could count the under 30-year olds on two hands.

"The young people today can't come to something like this," says Tom "One Eye on Paterson" Fuscaldo. "They're struggling. Look at the economy. They've got to work. They don't have time to volunteer. Then they've got their sports on a Saturday. These athletic leagues are so competitive, they can't get involved in something like this. And then, let's face it, today computers and entertainment and games are the new bread and circuses of Rome, and they keep people glutted, especially when there's a war going on."
In Morristown, activists are discouraged. The numbers at the weekly peace vigil have dwindled down to three and five at a time.
"They feel we're in there now, and there's no way to get out," Berkowitz is told.

Her eyes go wide with concern.

"No, I disagree," she says. "They're discouraged because the politicians aren't listening. They're not responding to them. If you look at the last election, why did the Democrats win? Because people thought they would end the war. They haven't. They're just as bad as the Repub… Well, not quite that bad. But if you look at the money that's backing Hillary, it's the same money that backed Bush, and that's why people are discouraged."

The longtime Dennis Kucinich supporter has been at this for six years straight. But it's coming to an end, she says. Not the peace vigil. It will go on, she insists, albeit in other hands. But she and Schwartz have to face the reality of getting older in their beloved New Jersey.

"I'm 64 and I can't afford to live here anymore," says Berkowitz, who's been folding pieces of orange construction paper to designate the different homemade soups she will now help serve to the crowd.
At another table, a woman in her early fifties wearing a Bush-Cheney mass murderers T-shirt, is off on an anti-Hillary rant.

The country's just endured eight years of a man she says is the country's worst president, and now it appears to be going with another bubble-wrapped candidate who supported the War in Iraq.

Someone mentions the name Bush and the woman immediately abandons her fusillade against Clinton for the hobbled but still more tempting target.

"Why," she seethes, "don't they just impeach him?"

One of the three 70-something men sitting on the other side of the table, says, "Pork."

"Pork, that's why they don't impeach him," says "One Eye on Paterson." "When a bill is passed – a bill to replace an old bridge, let's say – they put 50 amendments on there, pork projects without which they can't the votes of those particular representatives on the main bill, which is the bridge. Bush isn't vetoing those pork barrel bills, as he should, and the Congress isn't impeaching him, as they should."

"They got a deal worked out," says Juan Sanchez, M.D., of Hackensack.

"Exactly," says Fuscaldo. "They got a deal and they're going to ride it all the way to the next ‘election' when the corporations install Hillary."

The last comment sends the woman in the Bush-Cheney shirt harrumphing and running for cover, now doubly infuriated.

"We're Ron Paul supporters," Fuscaldo announces. "He's the only candidate who's patriotic, and who supports the Constitution."

Fuscaldo says Bush ought to be impeached for failing to uphold American laws, and for committing the United States to a war without an enemy. As for the Democrats, forget about it.

There are announcements up at the front of the room now and Madelyn Hoffman, executive director of N.J. Peace Action, mentions that Gov. Jon Corzine has written a letter of support. The name triggers a few boos.

She mentions that U.S. Rep. Rush Holt has also issued a support letter, which elicits a dumb silence from the crowd. "So has Rep. Dennis Kucinich,' she says, and there's a war whoop that rises from a lot of the tables, but not this one where Fuscaldo says it's Paul or nothing.

A man says to the Paulities that the corporate fix is in. It's going to be Giuliani against Clinton, but Paul will break off and run a third-party candidacy, which will drain enough votes away from Rudy to enable a Hillary victory. Sanchez and Fuscaldo look at each other as if they can't fathom the depth of dumbness.

Then he and Fuscaldo are trading hunting and fishing stories, and mutually lamenting a modern condition in which individuals are overburdened by government.

"What else are you supposed to do?" says Fuscaldo, who then relates a story about how he went trout fishing, and landed a beautiful catch, only to find half the dock in an uproar about how it was still fifteen minutes before the official start of the season.

To the question of why a pair of old Wrestling Ernest Hemingways are attending a gathering such as this, seemingly dominated by love-fest vets and 60s netherworlders, Fuscaldo says gruffly, "One word. Peace."

The oldies here are trudging in the camps of either Kucinich or Paul, the two most unlikely tough guys who to this aging activist crowd are nonetheless the ones among the presidential contenders, with their anti-war votes and votes against the Patriotic Act, who've shown guts.

And so persist the Bush-Clinton bashing and unleashed anger and angst about the war and about Iran and Pakistan, Musharraf and Bhutto, global warming and oil, and Susan Berkowitz, carrying her own bowl of soup now that everyone else has been served, sits at one of the tables next to Schwartz in the crowd, and they're about to get an infusion of New Jersey radicalism somewhere in Florida, displaced maybe and outnumbered, but committed. 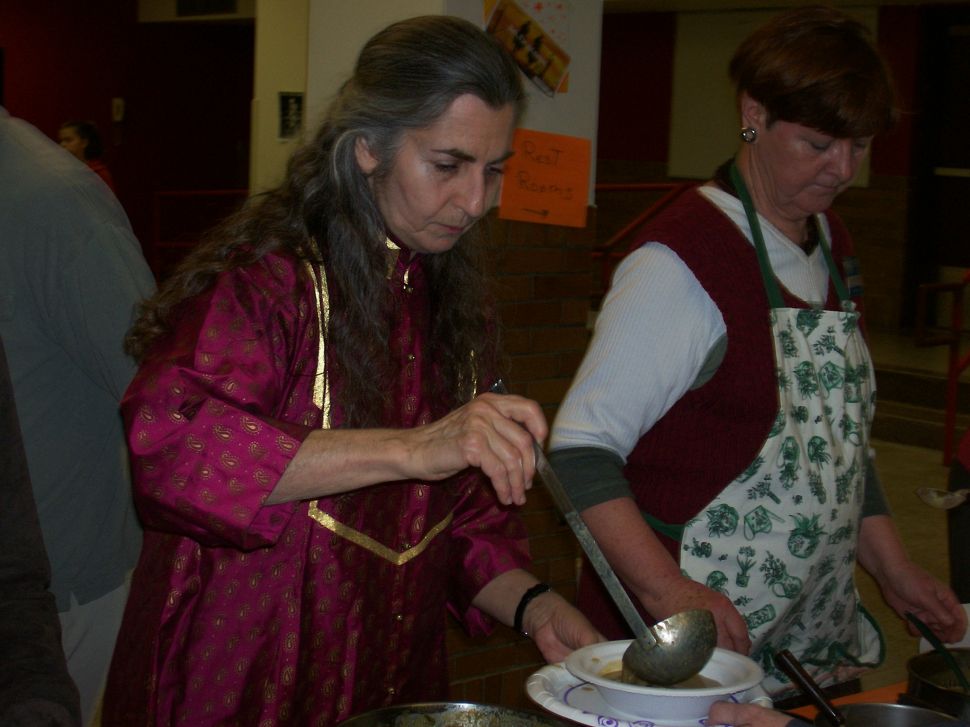