Tyler Kydd enters the Ziegfeld movie theater three minutes before his new film, Gagged, begins. The lights are still on, but everybody is seated, and, as usual, the audience turns to stare at him as he follows his manager and the movie studio publicist down the aisle to his seats. Tyler sits on the aisle, next to the publicist, whom he knows he will not remember if he meets her in a different context. She puts her elbow on the armrest and leans toward him, turning her head in profile, as if to shield him from the audience.

“People magazine is here,” she says.

“I’ll find out,” the publicist says.

The film starts. Tyler Kydd excuses himself to go to the men’s room.

A few minutes later, in row 4, sculptor Dane Peen is getting bored—even though he is married to Tyler’s sister, Maria Kydd-Peen. Dane noisily gets up just as Tyler Kydd’s character, playing the role of a gentleman cop, finds a mutilated body. Dane’s wife gives him a dirty look.

James Dieke, serious journalist and Tyler Kydd’s “best non-industry friend,” is staring at the screen, on which there is a close-up of a severed foot. James wonders where his wife Winnie’s sister, Evie, is sitting. He catches the eye of his wife, who’s sitting three seats away. She gives him a dirty look.

Dane Peen stands in front of the urinal and unzips his pants. “Tyler?” he says.

“Yeah,” Tyler says, snorting coke off the back of his hand. “How is everything?” He flushes the toilet with his left foot.

“If you want to know the truth,” Dane says, “Your sister is driving me crazy.”

“Somebody should have put her out of her misery a long time ago,” Tyler says. He bursts out of the stall with his hand in the shape of a gun. “Boom.” He straightens up and tugs the lapels of his jacket. “Ladies and gentlemen,” he says. “I-I-it’s showtime!”

Tyler Kydd is on. He is sitting in the back corner of the V.I.P. room at Chaos, a room that can only be reached by private elevator that can only be accessed by a separate entrance, guarded by two bouncers and a young lady with a list. Tyler Kydd is chain-smoking Marlboro reds and drinking martinis. Tyler Kydd is laughing. Tyler Kydd is frowning. Tyler Kydd is nodding, his eyes wide with surprise, mouth open. “Uh-huh, uh-huh, yes, I do remember meeting you on the set of Switchblade, how have you been since then? You had a dog, right, and something happened to the dog, something with an elephant? Oh, a cat, a cat,” and then to somebody else: “Hey, that night, that was pretty hot, huh, stick around you going someplace let’s talk later after all this but you’re doing well, right? You look great.”

“Jimmy!” Tyler says, spotting James Dieke, who is squeezing through the crowd followed by Winnie, both still wearing their coats. “Jimmy my boy. Jimmy baby.” Tyler grabs James Dieke around the neck, swaying him from side to side, then he pushes James away and puts his hands on each side of Winnie’s face and pulls her toward him and kisses her on the lips. “I love you guys.”

“Everybody loves us,” Winnie says.

“I especially love you,” Tyler says. “Did you have any trouble getting in? Those people at the door are such assholes. I keep telling the publicity people… Jimmy, where’s your drink? Somebody get this man a cocktail.” Tyler pulls Winnie onto his lap. “Watch out, Jimmy boy, I’m going to steal her from you one of these days.”

I wish you would, James thinks. But instead he says, “I like the movie.” No one pays any attention to him.

Winnie giggles and takes the martini glass out of Tyler’s hand and takes a large gulp. “Whoa. Go easy baby, easy,” Tyler says, taking his glass back and patting her on the butt. He slides his hand underneath the back of her coat.

“Hold on bro,” Tyler says. He tosses James a vial of cocaine and turns back to Winnie. “So, where’s my future wife?”

James bumps into Dane in the bathroom. “Christ. I’m trying to get away from my wife,” Dane says.

Just then Evie, Winnie’s sister, comes barging in. The three of them crowd a stall. “I never do this,” James says, and Evie says, “Oh, James, shut up.”

“I’m going to tell the whole fucking world. Including my wife. Fuck her.”

Tyler enters the bathroom, James leaves and goes to the bar. In the stall, Tyler presses up against Evie. “How come you weren’t at the wedding?” he asks.

Back at the table, Maria Kydd-Peen is saying, “I’d just like some appreciation sometimes. When I met Dane, he was living in an apartment with no bathroom.”

“James is either working or watching TV,” Winnie says.

“I mean, could he listen? To me? His latest thing is bad investments.”

“And does he even notice? And now,” Maria says, “they’re all on coke. Look at them all jabbering away like monkeys. It’s disgusting.”

James, Tyler, Dane and Evie lurch back to the table. “James is doing a piece on chimpanzees,” Evie says.

“We believe the government is illegally importing chimpanzees for secret medical research,” James says. “They’re stashing them in a warehouse in lower Manhattan.”

“Why would anybody bring monkeys into Manhattan? I mean, please!” Winnie says.

“Did you know that in some chimp tribes, the females are lesbians? And they let the males watch?” Dane asks, leaning over Evie.

“Who wants another drink?” James shouts.

“Tyler’s leaving,” Maria says. And, in fact, Tyler is leaving, moving toward the elevator, kissing and squeezing people along the way.

“We’ll give you a ride uptown, Evie,” Winnie says.

“That’s O.K. I don’t have to get up in the morning,” Evie says, and at the last minute manages to squeeze herself into the elevator with Tyler, just before the doors shut.

“Good girl,” Tyler says in the elevator. “Just promise me one thing. Don’t give me any of that marriage shit. It ain’t me babe,” he starts singing. “It ain’t me you’re looking for babe.”

On the street, Tyler’s driver is holding open the door of the limo. “Maestro!” Tyler screams. He pulls Evie into the limo and starts singing again, It ain’t me babe. He shoves his hand down her shirt and Evie puts her hand in his pants. “Don’t be too sure about that,” she says. “Babe.”

The two couples—Dane and Maria, James and Winnie—are standing on the corner. Trying to get a cab.

“If you want to kill yourself, like Deano Barry, go right ahead,” Maria says. “I really don’t give a flying fuck anymore.”

“What are you talking about?” Dane asks.

“For Christ’s sake, Dane. How stupid do you think I am.”

“I’m not getting in a cab,” James says. “I’m getting a drink. Tyler sits there snorting up a gram of coke, and no one gets on his case.”

“So it’s all about money,” Dane says, pointing at Winnie. “He makes 10 million a year and that makes it O.K.”

Tyler’s limo pulls up to the corner. Tyler rolls down the window. “Anybody need a lift?”

Dane and James get into the limo, climbing over Evie, who’s sprawled across the seat, laughing. “Hello boys,” she says.

Dane cranes his head out of the window and shouts, “Deano Barry lives!”

James sneaks a look back at his wife. Her mouth is open, but for once nothing is coming out.

At four A.M., James is standing next to his bed, looking at Winnie, who appears to be sleeping. He doesn’t know what to do, then he starts removing his clothes. Then he starts talking.

“It’s the giant government plot, Winnie. Winnie, are you awake? It’s the overcrowding of the niche structures but instead of using rats, they’re using monkeys, and they’re finding that the same behavior occurs in primates, which means that it goes all the way to the heart of the housing crisis. Of course, Stephen Jay Gould discovered the same construct in his snail studies…”

“I don’t give a fuck about Darwin. You’re an idiot,” Winnie says. “You’re revolting. And you smell.”

“I’m sorry I woke you up,” James says. He sits on the edge of the bed. “You’re so wonderful. You’re such a wonderful wife. I always want to tell you how much I love you, but you never give me a chance.”

“What are you talking about?” Winnie says. She sits up in bed and crosses her arms.

“Everybody admires you so much. Tyler is crazy about you.”

James puts his arms around Winnie and starts to kiss her. He climbs on top of her. “James,” she says.

James rolls onto his back and moans.

“We’re going to have a long talk tomorrow,” Winnie says. “About your behavior. We’re going to be making some changes around here.”

“I mean it, James. We have a child. You have responsibilities. Where the hell, and I really want to know this, where the hell do you and Dane get the idea that you can run around and act like 6-year-olds? Do you see Maria and I going out and drinking and doing drugs and staying out until 4 in the morning? How would you like it? How would you like it if I went out and stuck my hand down some guy’s pants and did drugs in the bathroom and God knows what else. Maybe I’m going to do that some night. Because you know what, James, I don’t care anymore. I’ve had it.”

“I’m beginning to think that maybe you’re an alcoholic. Your mother was an alcoholic. Oh, of course, nobody wanted to admit it in your pseudo-WASP family. But normal people don’t have every kind of liquor in their bar. Wine, vodka, a bottle of tequila—I can understand, but…peach schnapps?”

“Shut up, James. It’s my turn. Now you listen. I’ve had to listen to your bullshit all evening. And what is this business with Evie? Pardon me, but does she think we don’t know what she’s up to? Does she think we didn’t see her hiding in the limo? Hiding! She’s 35! She’s obviously trying to fuck Dane. And God knows what she’s trying to do with Tyler.”

“Dane? She wants to sleep with Dane?” James asks.

“Oh James. You’re such a baby. You can’t even do coke right.”

This article was originally published in the December 2, 1996 edition of The New York Observer.

Candace Bushnell began Sex and the City as a column in The New York Observer in 1994; it subsequently became a book and a series on HBO. 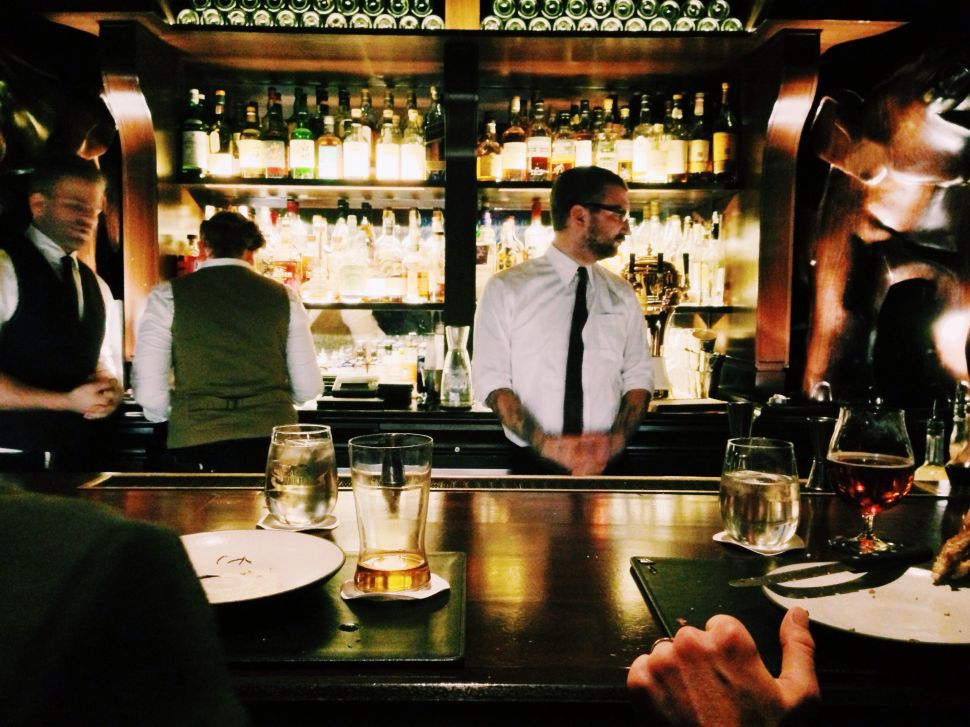