There was an afternoon in September when Carrie was going someplace or another, and there was too much traffic and she got out of the cab and walked down the middle of Madison Avenue in an expensive pantsuit. Let’s face it, she thought: You own this town.

“Listen, sweetie,” Mr. Big had said, several weeks earlier, “people don’t like you as much as you’d probably like to think they do.”

“Yeah? So what?” She got a beer out of the refrigerator.

“They think you have an agenda. But they don’t know what it is.”

“Is that supposed to be my problem?”

“That’s exactly what I’m talking about.”

Carrie felt herself slipping into that bad place again in her head. For the umpteenth time in months.

“If you want to help me, don’t regale me with the misguided, ignorant opinions of your coddled, spoiled friends, who don’t even have the guts to be single,” she screamed. “Who never had to eat hot dogs for a month because they didn’t have enough money to buy damn food. O.K.? So don’t tell me I’m too aggressive.”

That’s right: You own this town.

She hadn’t expected to break up that weekend. She was expecting to remain in a holding pattern. Hating him, loathing herself. Going through the routine motions of the relationship.

That week, she’d stayed out at the big house in East Hampton by herself. He called every evening at 11. One evening he called and said some 30-year-old soap star had been flirting with him at an event.

“Am I supposed to be impressed by this?” she said.

“You’re getting awfully cocky,” she said. “What makes you think you can be so damn cocky?”

“I don’t want to have this conversation.”

“You never want to have any conversation,” she said.

When he turned up Friday early evening, she was lying in bed, watching the progress of the hurricane on the Weather Channel. Watching the satellite pictures over and over. “It’s going to be a miss,” she said. “It’s always a damn miss.”

It had been one of their best weekends, even though she’d nearly drowned. On Sunday after the so-called hurricane, they’d gone to the beach and the waves had carved the beach in half. Everyone was swimming in the backwash and it was warm and deceptively tempting. Carrie had gotten rolled by a wave and swept down the beach, panicking but also realizing, with that strange detachment that occurs in moments of danger, that her mouth was open and she was screaming.

It hadn’t occurred to her that when you were drowning, your mouth would be open, rushing in.

She washed up on shore, and when she got out, Mr. Big was standing there, laughing.

She was drowning and he thought it was funny.

He didn’t get the difference.

He couldn’t read between the lines, see nuances. He didn’t have to. That wasn’t what the shareholders paid him for. It was black or white. In or out.

When they got home from dinner the weekend the hurricane missed, he said he didn’t know what to do. He couldn’t move forward. He thought they should move on. He started crying. Not for himself, for her. He’d rescued her from her lousy life, and now he was throwing her back. He felt like a shit for doing it, for things having to be that way, for not being able to give her what she wanted. The last thing he wanted was to hurt her.

The only part that wasn’t in the manual was her response: She started to laugh. “Oh, give me a break,” she said.

“I know you’re really in love with me,” he said.

“You think I’m really in love with you,” she said.

She went into the bathroom and took off her contact lenses. This will be the last time I spend the night in this house, she thought. When she came back out, he said, ” I didn’t want it to be this way.”

“You know what I mean. I can’t take it. No normal man can take it. What are you always doing out until 4 in the morning?”

“Talking,” she screamed. “Talking to my friends. Talking to people who have something to say.”

“Don’t worry about it,” she said. “Don’t get your knickers in a twist. We both served a purpose for each other and now it’s over. That’s the way relationships are. Think of it as a learning experience.”

Then she thought: Maybe she didn’t have all the information.

Nico Barone had resurfaced for an obvious reason: She’d just gotten divorced. “I find marriage boring and intellectually stultifying,” she said. She was in her office, wearing tooth-bleaching trays. She was having nightmares: Bob Woodward chasing her around an underground parking garage. “I don’t ever want to go there again,” she said.

This was a couple of days after the breakup weekend. In the middle of the week, Mr. Big had called and asked Carrie if she wanted to go out to the house in East Hampton. The relationship wasn’t quite over. “I’ll have to think about it,” she had said.

Instead, Carrie and Nico went to Martha’s Vineyard, where she spent the weekend numbing herself with alcohol. On Saturday night, they went to a party where they met a guy they called “the Mr. Big of Martha’s Vineyard.”

“What is it that you do?” Nico asked him.

“I’m in natural resources development and exploration in the former Soviet Union,” he said.

“Oh, you’re in gold and oil in Russia,” Nico said. She paid for their drinks with a new hundred-dollar bill. Nico always had new hundreds.

When Carrie got back Monday morning, there was a message from Mr. Big. “Where were you? I didn’t hear from you all weekend.”
As if.

He called back Monday, late afternoon. His voice sounded strange, even given the circumstances. “This isn’t working for me. I can’t do this. For my own sanity… I can’t go on. It’s counterproductive… for me.”

“Thank you for calling,” Carrie said. “I can see you’ve got a lot of misery ahead of you.” She hung up the phone and called Nico Barone. “I’m free,” she said.

There was something about the way she said that word, “really,” and that’s when Carrie began to suspect that there might be somebody else. Because that was part of the pattern.

Nico’s recently ex-husband was Dirk Winston, a pale, stocky novelist who was considered potentially important for about 10 minutes after his first book came out six years ago. When he moved to New York from Boston, he was taken up by the Diekes, a young married couple who were both ambitious journalists. He and Winnie Dieke had been friends at Harvard.

The two couples would have dinner at Dirk and Nico’s house in Sag Harbor. Winnie would sit at the table and poke at Nico’s cordon bleu cooking with her fork. “Well, it certainly looks interesting,” she’d say. Then she’d put her fork down and touch her mouth with her napkin. “Nico, why do you want to be on television?” she’d say. “There’s no real journalism on television. You should be a chef.”

Months later, Nico and Dirk were walking through Grand Central Terminal and a well-dressed young man in a suit walked up to Nico and said, “Aren’t you on ABC?” Dirk turned and walked briskly out of the station. Nico went to the Oyster Bar and ordered a Bloody Mary and six bluepoints. At 11:30 A.M.

At the end of July, Carrie was sitting in a downtown studio having her picture taken for a magazine. The makeup artist was applying liquid foundation to her face with a paintbrush. The photographer was saying, “We want you naked. You don’t mind being naked. You’ve done it before, eh?” in a European accent of indeterminate origin.

“Can I just wear my underwear?” Carrie asked. I just want to be with someone normal.

“Can we have some music?” the make-up artist asked.

Do you mind being naked?

In the morning, Carrie had heard from the Australian. The Australian was a female private detective, a friend of a friend’s. Carrie had met her at a dinner after a movie premier. She was standing in a corner, eating a slice of beef with her fingers off a bloody napkin.

“These guys are all the same,” she had said. “That’s why I don’t get involved.”

That morning, the Australian had things to tell Carrie. Like Mr. Big had made dozens of phone calls to a number in Palm Springs. Mostly after the 15th of July. All made to one female golf pro. Age 28. “He probably wants help with his swing. For free, you know,” the Australian said. The results were inconclusive at that time. But still.

“You can take your shirt off behind the chair,” the photographer said.

The bad day, the day they tipped the balance so to speak, occurred back in June, shortly after Mr. Big’s business dinner for the golf company, a dinner at which, Carrie was told, a female golf pro was present.

It started with a dinner at an apartment on the Upper East Side. Friends of Nico’s. Halfway through the dinner, Carrie started having fun. She left Mr. Big a message telling him she was tired and was going to go to her house that night.

At 8 in the morning, she turned up at Mr. Big’s apartment.

She got into bed and began to take the long, delicious slide into hysteria. Hours were passing inside her head, but when she looked up, Mr. Big was still sitting on the chair in the bedroom, in a starched white shirt and dark socks, staring. Saying nothing. Just with that expression on his face.

After he left to go to work, she began crying uncontrollably. The maid came in and looked horrified. At 11 A.M., Carrie called his office. “I want to go to an insane asylum.”

She wanted to put herself in someone else’s hands. She wanted no responsibility. She wanted to lie in a white room and watch TV, and maybe make potholders. You can’t act like you’re 12.

Sometime in the middle of September, Carrie was at a restaurant and Mr. Big was there. He came over and sat down at the table.

“I never knew what you were thinking,” he said. “You never talked about your feelings. Every time I tried to talk to you, you would go to that place in your head. You’re like a cyborg or something.”

His hand was on the table. Carrie touched his finger.

Let’s face it, Carrie thought, you ate the pickle. 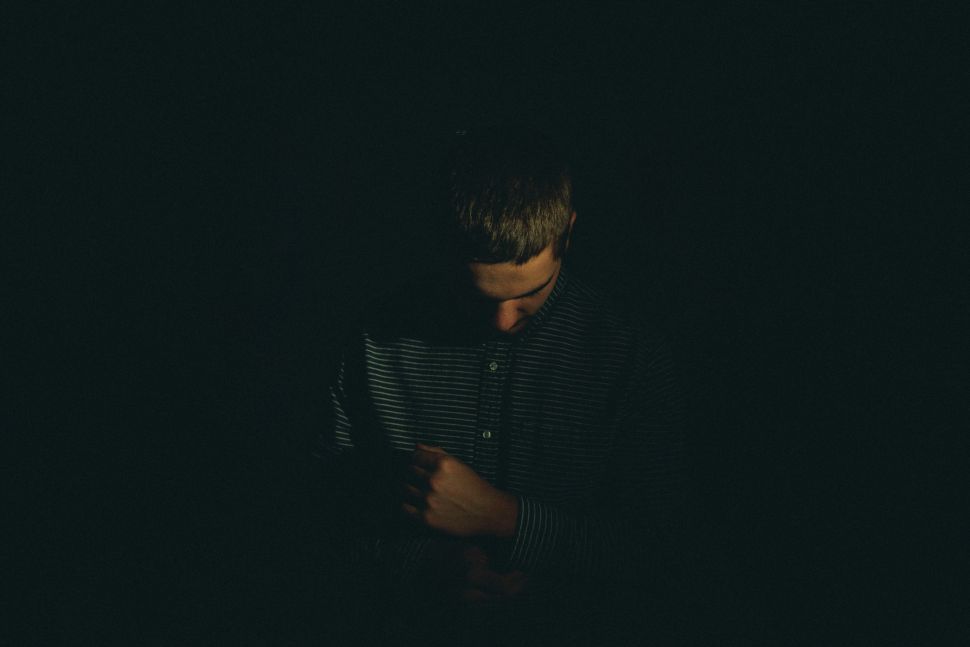