Shortly after accepting the support of the Ocean County Republican Organization in his bid for U.S. Congress in the 3rd district, Freeholder Director Jack Kelly welcomed an unassuming man onto the platform to stand beside him in a display of GOP unity.

The man was Chris Myers, Kelly's primary election adversary from Burlington, who attended the event along with a small contingent of party operatives from across the county line.

"Despite any attempt of the press to make this a county versus county primary battle, I will do all in my power to make sure any primary challenge will be the one that seeks to elect the very best Republican countywide… because that is our common goal," said Kelly, a 56-year old former mayor of Eagleswood for 11 years and 15-year veteran of the freeholder board.

He yielded the microphone to Myers, 43, Medford Township's deputy mayor, a vice president at Lockheed Martin, and decorated combat veteran of the Gulf War, who kept the line of fire trained on next November's Democratic opponent, state Sen. John Adler of Cherry Hill.

"I agree with Jack, this is the frontlines of not getting (Adler) elected," said Myers. "I've been on the frontlines in Burlington County against the corrupt Camden County Democratic machine, and have no doubt about it, they're after this district to bring their Trenton-spending ways to Washington."

That was an echo of Kelly's earlier point to his core message of not allowing "tax and spend Democrats to win another seat in Congress to continue their assault on the middle class."

The Republicans from two different counties embraced, and the crowd at the Holiday Inn in Toms River cheered and there was good feeling and the overriding sense that this would undoutedly be a gentleman's contest between men who disagreed on little and harbored a common delight in inflicting loss on Democrats.

But few political functions in New Jersey escape the shadow of a party boss, and Ocean and Burlington are no exceptions. On this occasion in part it was the powerful Ocean County Republican Chairman George Gilmore whose grip on the event was palpable as he stood to one side of the podium and occasionally addressed the delegates.

On Saturday, Kelly had emerged from a party screening process overseen by a committee of 16 members, all of whom were Gilmore appointees. Half a dozen people vyed for the screening committee's support, but according to committee Chairman Carl Block, among this "deep and talented field of candidates," public service veterans Kelly and Freeholder Joseph Vicari were the party favorites. Block said Vicari interviewed first, and withdrew his name from contention in support of Kelly.

Gilmore denied the long-serving freeholder is a face-saving prop designed to give Ocean County delegates the assurance that they have a man in the race, but who is in reality a no-hoper against the well-connected Myers from Burlington.

"Lets' wait and see how much money each candidate has raised after the first filing deadline," said Gilmore. "There have been millionaires and multimillionaires who have run before – that Huffington out there in California comes to mind – who didn't do well. It's not just about spending a lot of money."

Kelly figures he needs $600,000 ballpark to get his primary message out there, and has scheduled a meeting for 10 a.m. today to examine all areas of campaign fundraising. Outgoing 3rd district U.S. Rep. Jim Saxton competed with a little over double that amount in the last election cycle.

"I am only focused on my campaign," Kelly said. "This is not a campaign against Chris Myers. It is a message of 28 years of experience. I was just elected to a sixth, three year term on the freeholder board. I understand the issues of this district. The voters of this county know me well."

Assemblyman Brian Rumpf, who until as late as last week expressed an interest in pursuing the 3rd district Congressional seat, said Ocean County will rally behind Kelly, whom he described as "one of the most astute people you could ever meet."

"Quite frankly, my ultimate decision to withdraw was based on a conversation with Jack in which I sensed his level of commitment," Rumpf added. "Ocean County has gotten to know Jack Kelly well."

Now Kelly said he has to convince the voters in Burlington and Cherry Hill that he is also ready to work for them. The total number of Republican voters per county in the 3rd Congressional district district is: Burlington, 38,532; Cherry Hill: 5,897; and Ocean, 39,204, for a total of 83,633. The Democrats number 71,118 registered voters in the 3rd.

The big issue remains money, particularly in a contest with Myers, who is respected by both sides of a warring GOP in his home county, where no one makes a political move withot consulting former Republica
n County Chairman Glenn Paulsen – unless they're aiming to run into him.

Still officially undeclared, Myers comes to the congressional race not as a hand-over-hand political toiler who must depend on the largess of a party benefactor, but as a management level player in the very company that was Jim Saxton's largest political donor. Myers' is friendly with Paulsen, but as a Lockheed VP and a millionaire in his own right, he is unbossed in the traditional sense of local politics, according to sources from both sides of the Burlington County GOP war.

As for the suggestion that in his candidacy, not Glenn Paulsen and not George Gilmore, but defense industry powerhouse Lockheed Martin in a time of war would become the supplanted district boss, "There is no conflict of interest," said Myers. "Lockheed Martin is focused on the development of high tech products, such as the Aegis Cruiser radar system, which saves the lives of our men and women in uniform."

Whatever disagreements emerge over the course of the primary, Myers will be unlikely to get an argument on that point from Kelly.

"Our nation's interests are best served when we agree that the Congress must understand that our national defense is our country's top priority," the Ocean County nominee told the crowd of delegates. "We must invest in our military." 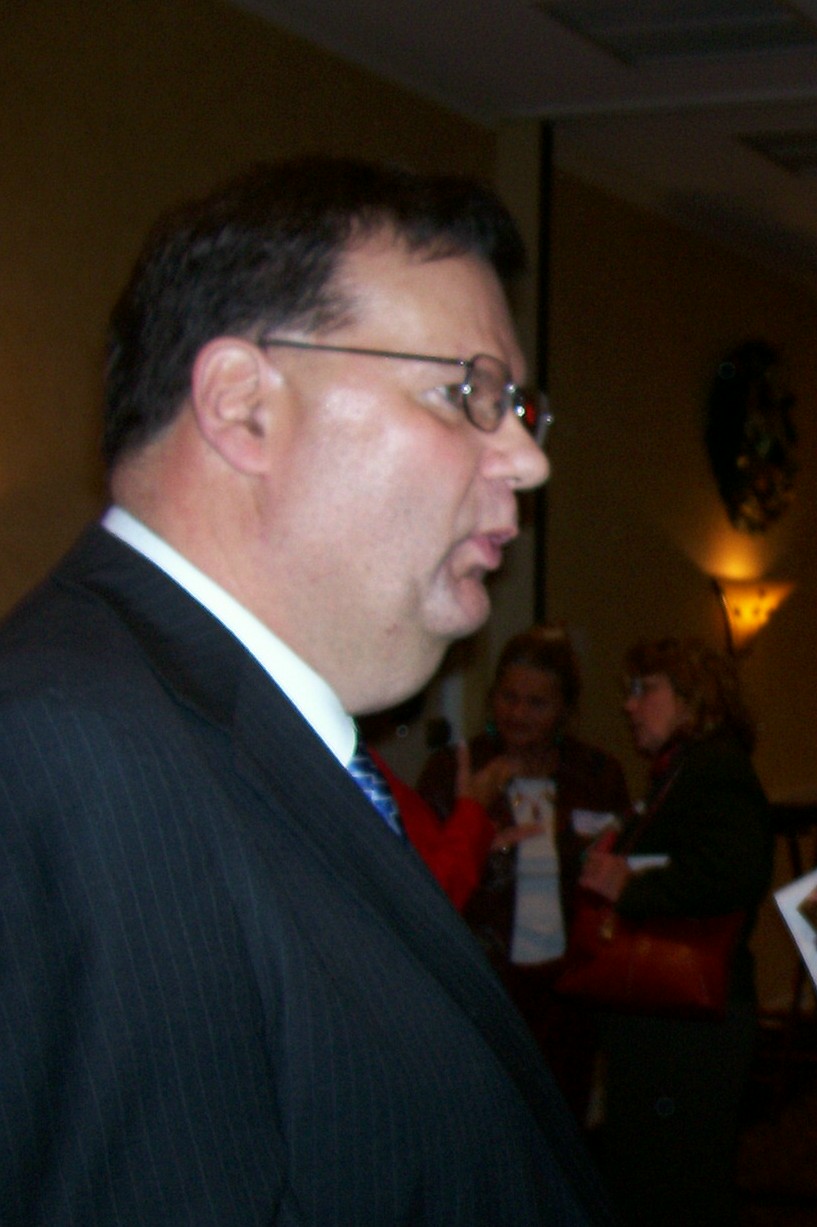