PATERSON – Both sides charge that election year politics are behind a full-blown contract talks stand off here between the mayor and fire department on one side, and the City Council on the other.

Mayor Jose "Joey" Torres said he delivered the city’s $26 million contract with the 217-hard-hat strong Paterson Fire Department to the council in November, but has since received nothing but stall tactics and excuses from the governing body. Torres said he believes council members fear getting blamed for the five-year contract come election time on May 13th, and so are attempting to distance themselves.

Not a good tactic, in his view.

"This contract emulates the police contract they already adopted," said Torres. "It’s consistent with the 4% cap that the governor wants. The money is there, because I squirreled away what I thought this contract was going to cost. I did my due diligence. There’s no financial impact on the community in terms of a tax increase. The money’s already in the budget. The only thing I can think of is they would rather have an arbitrator confirm it."

"They all supported Joey during his campaign and now this is his way of repaying them," said Goow, who admits he’s flabbergasted by what he sees as some of the more exorbitant provisions of the contract, including a 19.5% firefighters’ pay increase over five years, retro-pay in lieu of no raises for the past three years, and time and a half for nights and on holidays.

"Joey’s throwing us under the bus, making it look like it’s our fault that there’s no contract," said Goow, a two-term councilman and first generation Patersonian with southern Russian and Syrian roots. "He created the politics here, not the council. He wants to be able to go and point me out to the firemen and say, ‘This guy’s not supporting us, don’t vote for him.’"

The mayor, who was re-elected to a second term in 2006, and Goow have long waged a public spat over everything from the colors of police cars to liquor licenses to a lawsuit Goow brought against Torres in defense of a former police chief, to the specific roles of the two branches of government – legislative and executive, which to Torres’ and Goow’s tastes too often overlap as long as each occupies a space in one.

So nobody in Paterson’s political circles was surprised when Gerardo Torres, a retired Passaic County warden and the mayor’s older brother, took out petitions to challenge Goow for his $34,000 a year council seat.

"Joey will do anything to take me out," said the councilman. "If they want a beating, they’ll get one."

But after sitting down with his wife and talking it over, the older Torres brother a couple of days decided against running, and the mayor acknowledged that it was better that way.

"I would support my brother, but that’s the same reason we’re pulling him out of that race," said the mayor. "He’s a viable candidate, and a leader, but there are inevitably going to be the charges that I’m running him, so we just decided not to deal with that."

Gerardo Torres today told PolitickerNJ.com that he would support Elizabeth Gonzalez, the wife of former Council President Jerry Luis Rosado, a Torres ally who left the council amid a battery of driving infractions, including fleeing the scene of the accident.

"Yes, my brother’s backing her," the mayor said of Rosado’s wife, "but it’s too early to tell from my perspective. I’m not sure whether a mayor should openly go out and endorse anyone. The truth is once they’re elected I’ve got to work with everyone."

This week’s departure of the Torres name from the Ward Two field enlivened the prospects of other candidates hopeful of representing the mixed ethnic, predominantly blue collar ward. Among those prospects is mason and self-described fiscal conservative John Larko, who on Tuesday marched into City Hall to confront the council on the issue of the fire department contract.

In a flesh and blood extension of his website, which features a film clip of Goow from the council meeting juxtaposed with himself chastising the incumbent councilman, Larko upbraided Goow for failing to take action on the fire department’s contract.

"Instead of spending time, energy and money, my suggestion is you call for a vote and vote," said Larko, who fears a protracted legal battle between the council and the fire department. A recent contract battle with the police department resulted in a $760,000 price tag.

"The City of Paterson can’t afford wasteful spending. I urge you to vote on this matter," said Larko.

Nursing a broken ankle after taking a spill down the stairs in his house last week, Goow with crutches propped next to his chair took his time responding, allowing two of his colleagues to speak first.

"How would you think someone can vote on a contract without reading it?" At-Large Councilman Rigo Rodriguez asked Larko. "Don’t tell me I’m going to vote on something I haven’t read. You are wrong, and so is the fire department."

Then there was veteran Fourth Ward Councilwoman Vera Ames-Garnes, who herself faces a challenge from up and comers Kisha Manning, Wilkin Santana and Donald Whitaker.

"We got the contract when we were going on break for winter holiday," said Ames-Garnes, who said she wouldn’t "force-feed" anything to the public, and especially not an item in the area of public safety, which absorbs 35-40% of the city’s roughly $200 million and change budget.

Larko tried to answer but was bellowed down by Ames-Garnes, who asked if the candidate had ever attended a council meeting.

"I’ve been sitting here 22 years and this is the first time I’ve seen you," she said.

Larko admitted he had never been to the chamber, then added, "Just vote ‘no’ on the contract."

But now it was Goow’s turn.

"Mr. Larko is going to find out a lot of things if he gets to sit in my seat. It’s not always the way you perceive it to be," said the councilman. "…We’re not going to let the mayor pit the fire department against the council. You’re jumping on the bandwagon and you have no idea what’s going on. I saw your website. It’s pathetic. I got a leg with plates in it. I’m on medication, but you have no clue what’s going on here. Don’t come here to aggravate me tonight."

A crowd of residents was clapping and cheering. Should it come to a legal battle, "You’re damn right we’re going to hire our own lawyer, so put that on your YouTube," Goow said.

"I read everything on my desk, and I haven’t seen it," objected retiring Councilman Tom Rooney. "I’m a compulsive reader. If it’s in my office, it’s very well hidden." Then to Larko, "The gentleman may have good intentions. I don’t mean to disrespect him, but the advice you’re giving us is wrong."

As if to provide further opportunity for the council to amplify its disgust with the fire department, a woman identifying herself as Laurie Demarest replaced the departed Larko at the microphone fronting the council. She told a story about calling 911 when her 9-year old daughter was having chest pains on Saturday evening. Demarest said her efforts to get the fire department to send an ambulance proved fruitless and humiliating, prompting her to get in her own car with her daughter to try to personally drive to the hospital. When she ran a red light, she said, a patrol car stopped her, then escorted her to the emergency room when the police officer learned of the sick child.

"The worst part of it was when my daughter and I ran the red light, that was when the ambulance came out of the fire house," said Demarest.

"It is becoming extremely discomfiting to hear these repeated stories," said At-Large Councilman Jeffrey Jones. "Dealing with this particular fire department is bringing us no real value. There’s a problem with leadership."

Burgos attempted to intervene. "It’s an incident and we need to investigate it," said the business administrator. "Let’s get to the bottom of it. I need to know where the disconnect happened."

Speaking directly to Demarest, Ames-Garnes said, "I am very, very sorry you had to go through that with your child. That’s trauma. We will work with you to get to the bottom of it."

Goow requested a formal report, a copy of the 911 call, a copy of the transcript, and demanded the issue be brought to the mayor’s attention. "I fell down the stairs and broke my ankle in half," he told Demarest. "The fire station is four blocks away and it took them 20 minutes to get to my house. And they want a 20 percent raise over five years time? This is ridiculous."

After the meeting Council President Ken Morris, Jr. concurred that the governing body did not receive enough time to vote on the contract, particularly given conflicting schedules that prevented fire department brass from meeting with Morris and other council people.

"There are certain things in the contract that are cost-prohibitive," said Morris, who also said all the costs add up to more than $26 million. "If the State of New Jersey recognizes that it is living beyond its means, think of what we are encountering in Paterson, where expenses beyond the taxpayers require us to go for distressed cities aid."

Regarding Torres versus Goow, "Is it just politics?" Morris pondered. "Think of it more in terms of the following: the administration has its responsibility to negotiate contracts, but it’s the council’s responsibility to watch the purse strings."

Resigned to reality, Morris said he would likely broach the subject of a vote to his council colleagues at the next work session. Gun to their heads, they have to do it, and better to do so before a judge makes them. The president knows the council will probably vote no, which will send the contract into arbitration, a costly scenario that almost always results in the union’s favor, but what the cost will be for Goow and the others come Election Day, Morris wouldn’t speculate. 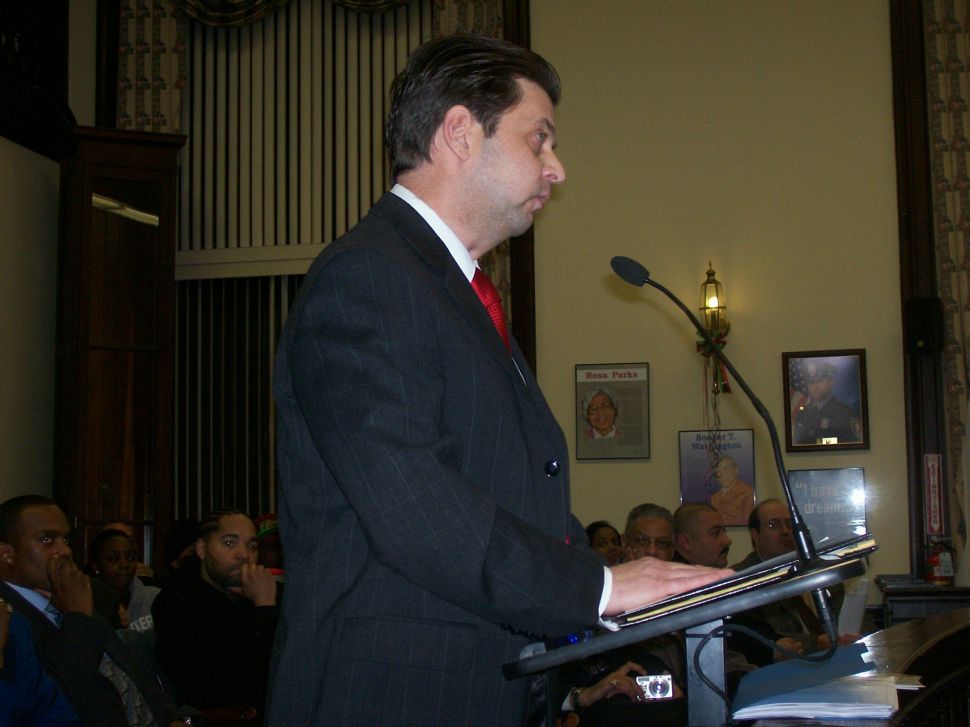