The governor said after leading 13 townhall meetings in 13 counties around the state, he could feel the outrage out there and recognizes the need for substantial cuts asNew Jerseyto date has stared tremblingly at a $3 billion budget deficit.

"It was a great opportunity to listen first hand to the public’s frustration generated over too many years of borrowing," Corzine told the Legislature. "The public is 100 percent right."

Making his presentation on a drab, rain-filledday to a gloomy-looking Assembly chamber crammed with legislators from both houses, Corzine arguedthat his budget containsno new taxes, does not borrow,and increases property tax relief.

In Corzine's words, the budget for Fiscal Year2009 -just shy of $33 billion -represents "aturning point in the fiscal patterns of our state," which labors under the weight of mandates and declining federal dollars.

"New Jersey has a government that people can’t afford, and that requires many unpleasant choices," Corzine said.

Sen. Gerald Cardinale (R-Bergen), a member of the commerce committee, said Corzine was right to present the framework of his budget proposal in auspicious terms.

"I will give the governor credit for appreciating and making it plain to everyone the nature of the problem we have," said the veteran GOP senator. "He's come farther than anyDemocrat in my history in realizing fiscal responsibility."

Sen. Sean Kean (R-Monmouth), who watches constituents' blood boil when he tells them in community forums about how he's watched the budget rise from $22 to $33.5 billion in his five years in the legislature, called Corzine's speech "monumental."

"It's an extremely positive development," said Kean. "I was talking to other Republican senators afterwards and we were agreeing – and this is not to undermine the governor's speech – but we agreed that if he had done this two years ago we would be in a different position today. I'm veryencouraged."

In Corzine's budget, spending is down in every department in the executive branch. Through attritution and a hiring freeze, the state work force has been reduced by 2,000 jobs. With this budget, a total of 5,000 positions will be permanantly eliminated, Corzine said.

"The effect of these reductions will mean future savings," said the governor.

Residents earning annual income of greaterthan $150,000 will no longer be elligible for tax rebates, the governor said. Municipalities with populations of fewer than 10,000 will take a hit – and that was a line that Cardinale, for one, found troubling in Corzine's remarks. The senator said he understands that the governor is probablyangling for greater consolidation of smaller municipalities, but heis concerned over the fate of the bulk of towns in his district, which are small.

Cardinale had other concerns.

"I give him credit, but there are some sacred cows that he seems not willing to touch," said the senator, who would like to see a repeal of the 2001 pension law; an end to prevailing wage, which he said raises by 35% every public improvement contract; and amendments to competitive bidding and the wetlands act. In the case of the latter, Cardinale said the state is losing money for transit improvement projects as a consequence of too stringent wetlands requirements.

Identifying bloatedschool and muncipal budgets as a key source of high property taxes, the senator touteda bill he is working on that would freeze for three years salary and benefit accountsat thelocal level.

But whatever the fine point differences,the Democratic governoraccomplished today what no Republican could do in what amounts to a Nixon in China moment for Corzine and New Jersey, Cardinalesaid.

In an acknowledgement of the state's stinging fiscal crisis, Corzine in his speech againlamented the failure of his stem cell research initiative last November, but admitted he had to gulp down the hard lossbecause the public didn't believe it was a prudent investment given the times.

"What's clear is the town meetings really made an impact in changing the governor's perspective," said Dr. Brigid C. Harrison, professor of political science at Montclair State University. "He really is listening, and part of the evidence for that is where he proposes making cuts."

Harrison said Corzine has historically proved a chaampion of the hospital organizations and education communities, "So it's a bitter pill for him to swallow," she said of his proposed cuts in those areas.

"What we're going to see now are the representatives from these organizations trying to get their state legislators to mitigate the effects of these cuts," said Harrison. "It is a turning point, as the governor said. We'll see if the opposition that has mobilized against him will continue to mobilize, or join forces with the governor."

Like Cardinale and Kean, Assemblywoman Dawn Marie Addiego (R-Burlington), who sits on the appropriations committee, praised parts of the governor's plan early but alsocouldn't resistaback-handed "I told you so."

"Governor Corzine is finally listening to what the people of New Jersey and the Assembly caucus has been saying for six years – the solution to our problems is to cut spending," said Addiego. "While he has provided us with a good starting point with his proposed cuts – many of which were proposed by Republicans two years ago – some of his reductions miss the target. I hope the governor and Democrat leadership are willing to seriously consider our alternatives."

Sen. Ray Lesniak (D-Union), chair of the economic growth committee anda key Corzine ally, told PolitickerNJ.com he believes the governor's approval ratings, which are in the low 40s,will climb as a result of today's speech and budget plan.

"No one's going to be happy, but the cuts were necessary," said Lesniak, who had told Corzine in today's lead up only to make sure that he didn't bank on any money from his proposed toll hike plan.

A Fairleigh Dickinson University PublicMind poll released this week reinforced the angst that Corzine felt out there on the toll hike tour, as one in four voters (25%) said they believe the state is headed in the right direction, the lowest percentage since just before the governor's election.

In the same poll, one in four (27%) said the governor is doing a "poor" job, up 10 percentage points from early January before his State-of-the-State speech. According to the poll, "a third (33%) rate his performance as "good" or "excellent," down from 36% in early January and from 42% in late October just before the state’s legislative elections."

Commuterswhodrive the New Jersey Turnpike or Garden State Parkwayto and from work are more likely (33%-23%) to rate the governor’s performance as "poor" than other commuters.

"There’s no doubt the governor’s proposal for raising tolls has taken a bite out of his public standing,"said PeterWoolley, a political scientist and director of the poll.

Lesniak admitted that the tone of the governor's speech was sober yet hopeful. "It was a turning point as he said," said the senator. "We will be able to provide the state with funds for infrastructure improvements while going after debt."

Regarding the governor's toll hike plan, which provided Corzine with the face-to-face forum for hearing from fed-up citizens, Lesniak said, "It's dead. But ifthese (proposed budget) cutsreduce significantly the debt of the state, there could be a renewal in some sort of trimmed down fashion."

As for working across the aisle in the coming weeks, Lesniak said of the Republicans, "Only time will tell whether they'll act responsibly or politically." 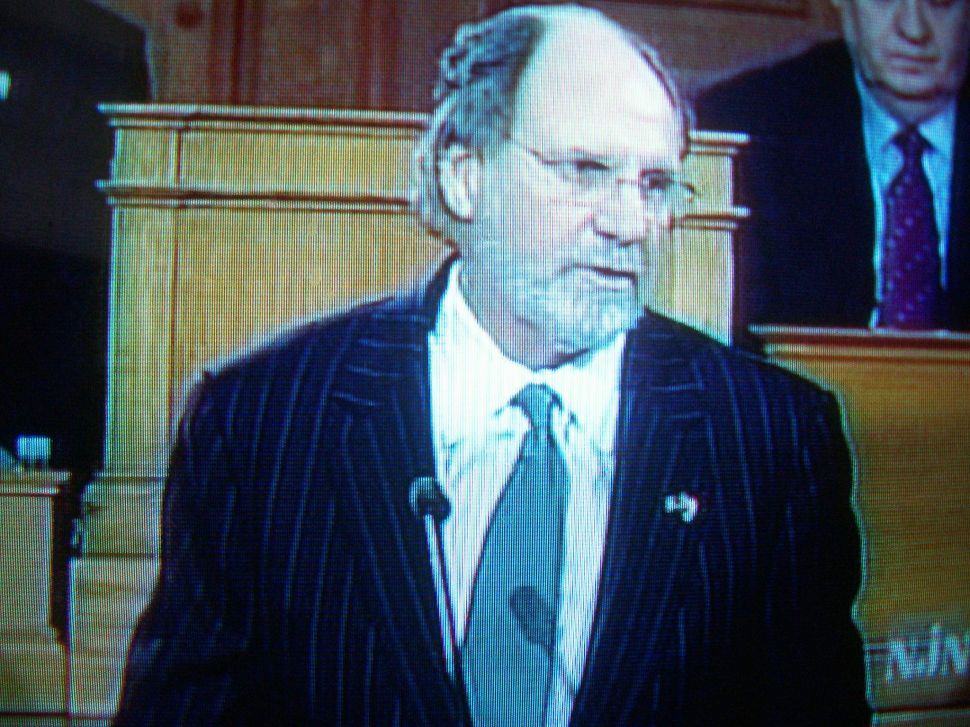