"I will build on my work of the last few years, to stand strong against those who attack our values that short change our state and to deliver the results that improve people's lives," said Lautenberg, who was first elected to the Senate in 1982.

Lautenberg said he wants to ease those burdens placed on hard working people by the Bush administration's failed leadership through a mortgage crisis, rising health care and gas costs, and a "war without end" in Iraq.

"I'm deeply concerned about the future of the country and the state," said the senator. "I want to fight everyday for a change in direction, for the change we so desperately need, and I am pleased to undertake that task."

U.S. Sen. Robert Menendez, who is out of the state, issued a statement of support.

Only U.S. Rep. Rob Andrews was not present today among the seven Democratic members of New Jersey's congressional delegation. Earlier today, Andrews' spokesman Bill Caruso told PolitickerNJ.com that Andrews would not commit to endorsing Lautenberg at this time.

"You'll have to ask him," Lautenberg spokesman Scott Mulhauser told reporters who pressed the senator about Andrews' absence today.

Caruso issued the following statement this afternoon from Andrews:
"Over the last few days, Congressman Andrews has been approached by many leaders of the Democratic Party who have urged him to step forward and run for the Senate because they think that 2008 is a year where voters are seeking a change in government. Because he respects the judgment of these leaders, he is carefully considering how best to serve New Jersey and the country."

Corzine thinks the answer is Lautenberg.

In his statement of support for Lautenberg at the rally, the governor highlighted what he said were the senator's clear sense of priorities.

"I think no one has made it clearer we ought to stop spending $12 billion a month in Iraq and start focusing on Medicaid, charity care, education funding for our children and transportation," the governor said.

Introduced to the crowd by Cryan after the governor and congressmen gave brief remarks, Lautenberg in his speech kept his focus mostly on Bush administration policies which he said have weakened the security of the country and of New Jerseayans.

It might have been worse without Lautenberg in office, he suggested.

The Democrat noted his reform of port security funding so that federal monies are distributed according to risk, not politics. He also took credit for leading the fight against the administration's effort to limit the State Children's Health Insurance Program (S-CHIP) funding.

"We stopped them dead in their tracks," Lautenberg said to applause

Lautenberg touted his co-authorship of a law requiring the administration to reimburse military families for the cost of body armor shouldered by those families of men and women serving in Iraq and Afghanistan, and his successful effort to block the Bush administration from softening state chemical plant security rules.

"Friends, even after the current president, President Bush, is gone from office, we know that special interests in Washington are going to continue to try to do real damage," Lautenberg said.

He said he wants to be there to take a stand, and he asked people to join him.

Senate President Richard Codey (D-Essex) did not attend the event but issued a statement of support, which read in part, "Frank Lautenberg has been a fearless fighter for New Jersey's best interests, even when the Republican majority in Washington kept throwing up a brick wall. With a chance to take back the White House this year, now more than ever, we need his wisdom and tenacity representing us."

The 84-year old senator made a joke of the age issue after Sires said Lautenberg had referred to those in the Bush administration as "kitty hawks." Amid laughter, Sires immediately corrected himself and said "chicken hawks."

"Albio thought I was calling someone the kitty hawk," Lautenberg said later. "I've been around a while but not that long."

Paterson came up, although Lautenberg wasn't the first to mention his native city.

"Frank and I were both born in Paterson," said Pascrell. "What the heck else do you need to know?"

In a nod to Lautenberg's Jewish roots, Roberts said he hesitated to suggest that as senator Lautenberg brings the "bacon" home to New Jersey.

"Joe, I like corned beef and cabbage," said Lautenberg. "But I don't mind transporting a little bacon here or there." 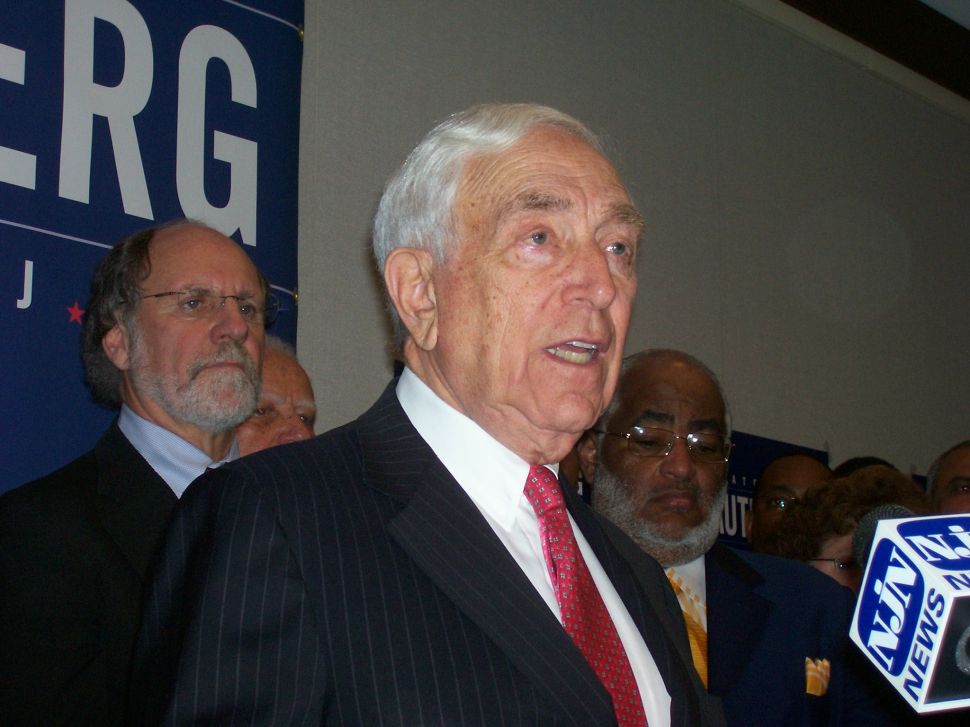