As president of the local tenants association, Lyons didn’t care who he offended in his drive for better housing, and he took that attitude into a run for City Council in 1996.

"We used to go door to door together," recalled Etchison of Lyons’ first campaign. "I was like his little brother."

Lyons won. But though he successfully backed Etchison for district leader, Etchison then ran against Lyons with the muscle of South Ward boss D. Bilal Beasley and Team Irvington behind him.

The councilman took the challenge as a betrayal.

"When I see him around, we don’t talk, said Lyons. "I lost respect for him after that."

A police officer and Marine Corps veteran who is the godson of Assemblywoman Cleopatra Tucker, Etchison said it was only political inevitability that propelled him into the arena against a man he once admired, but whom he came to see as a chronic naysayer.

In the 2004 election, the student lost to the teacher by 82 votes, but there was a third man in the race: former mayor Michael Steele.

Now it’s just friends turned foes Lyons and Etchison battling for control of Irvington’s north ward, and the race is intense with a month and a half until Election Day.

"You look at this mailer that Gene has out there with his picture on it, and it says, ‘North Ward Councilman,’ as if he’s the councilman," Lyons complained.

He’s not the only one upset with his opponent’s advertising.

"Dave did a lit-drop on Saturday that has his picture on it with the words, ‘Together we will keep corruption out of city hall,’" said Etchison. "You know, I’m offended by that. He’s running against me. Is he insinuating I’m corrupt?"

For the 12-year incumbent Lyons, Irvington’s problems stem in large part from Team Irvington, the political organization founded and run by Beasley, which Lyons says claims a piece of every council person except him. If elected, Etchison, who enjoys Team Irvington’s backing, would be a rubber stamp for Mayor Wayne Smith, a failed administrator, in the councilman’s view.

"The Board of Education is bad, the test scores are bad, the curriculum is bad, the township is bad, crime is bad, housing is bad. I could take you to places in the south ward, where Bilal Beasley lives, that look like Beirut," Lyons said. "Gene Etchison is going to run with these people, and he’s just going to be a puppet for them."

As the challenger sees it, part of the problem for north ward residents is that Lyons determinedly brands as corrupt anyone who disagrees with him.

"That’s not the way to work with people," said Etchison, a 45-year old detective in the Newark Police Department’s fugitive squad, who argues that his professional background gives him the maturity to build consensus.

Last week, the candidate drove through the north ward, crossing Myrtle Avenue, dubbed Murder Avenue in the neighborhood, to the 18th Avenue corridor – a jagged stretch of gangland bordering Newark’s West Ward. He got out of his car and walked over to the concrete barriers blocking entry to Columbia Road.

"If they (drug dealers) can use an avenue to escape or evade police they will do so. Obviously this is such a hotspot, so what the police have done is they’ve blocked it off," said Etchison.

A few paces up the road, the candidate stopped in front of a well-groomed beige brick face. Landscaped with fir trees and appointed with a brick columned enclosure, the place jumps out to the eye amid a street scape of rundown and boarded up buildings.

"This man took the time and effort, and imagine if everyone took the time and effort to put into their home, this place would look like Millburn or Maplewood in no time," said Etchison, making a broader analogy between the homeowner who perseveres even in a drug zone to create something positive – and a councilman who must operate within a system he may not like.

The imagery fits on another level for Etchison, who owns a home in Irvington, a statement about his stability and commitment to the town, he says, while Lyons continues to rent.

A commanding presence in suit and tie and long-coat as he wanders a street he once walked as a patrolman, Etchison said he doesn’t wait for any mayor’s administration to act in his neighborhood, he simply walks in and takes charge. Four years ago, when he wanted to work out in the local Orange Avenue Park, which was overrun by gangs, he said he walked in and told the gang members, "I’m taking over."

It’s a brash style not dissimilar from the man he opposes.

Though Lyons doesn’t try to evade the rebel tag, he resents the suggestion that he’s merely a head down hell-raiser. There is singular value in his opposition to Beasley and Smith, he argues.

"I have made my constituents aware of things that have ta
ken place behind closed doors between politicians, things they didn’t know about that affect them on a daily basis," said the councilman.

When Smith boasted that his administration had restored sound financial footing to the city, and ballyhooed Irvington’s decoupling from the state’s distressed cities program in 2005, Lyons stayed on the offensive.

"As we now know, Mayor Smith was premature in his assessment," Lyons wrote in a Jan. 9 letter to Department of Community Affairs Director Joseph Doria, referring to Irvington’s current budget shortfall of $6.5 million. "The Mayor now lies and says DCA advised that Irvington was being put out of the program.

"I believe that the only reason for the mayor’s refusal to re-apply was because he did not want the state oversight of fiscal matters that come with the dollars under the Distressed Cities Act," Lyons wrote. "The result is that we are back to square one as it relates to our finances.

The councilman also wants to know what happened to a $483,000 allocation to the City of Irvington from the state Department of Environmental Protection for brownfields remediation.

Etchison maintains that Lyons’ obsession with the Smith Administration and its failings prevents the councilman from serving his ward, and plays havoc when Lyons wants basic services like street paving delivered from the administration he regularly flogs in public.

As for Smith’s implication in a federal corruption probe, Etchison said, "If the mayor committed a crime, he should go to jail, period."

But in the meantime that doesn’t mean Etchison would refrain from working with the mayor, or shirk financial help from Team Irvington, the political machine that Beasley built as an outgrowth of his 1960s Newark activism.

A Newark native, Beasley moved to Irvington long before the likes of

Etchison, Smith and Council President John Sowell arrived in town. Beasley consolidated black political power in the south ward when whites still ran Irvington. As the demographics shifted with white flight in the 1980s and 1990s, Beasley and his outfit became the town’s center of gravity for political power. Anyone who wants to be a player here goes through Beasley and that once included Lyons, who had his own falling out with his south ward counterpart.

Now the implications of a Lyons-Etchison showdown are bigger than the two men, and it’s not just Etchison who can claim a powerful backer.

After Cory Booker defeated Ronald Rice and became mayor of Newark, Beasley aligned with him and North Ward boss Steve Adubato to dislodge the maverick Rice from his 28th district senate seat. Rice survived the onslaught while his Irvington opponents stumbled.

Smith – who originally hoped to be the senate candidate against Rice, was cast aside by Booker – and Beasley, who was the candidate, lost.

Now Rice is recommitting himself to Lyons, the only one who stood with the senator throughout his travails last year.

"He has been a stand-up council person," said the senator. "The council doesn’t give him respect because he looks out for his constituency. Unfortunately, there’s been a thin line between Etchison and Team Irvington.

"The problem," said Rice, "is good people are brought in by the wrong folk. Dave’s been putting the human cry out there. We have to have people in office who are there to do the people’s business. I can’t go to the state and ask for dollars if the money is not going to the r
ight place."

Etchison has his own enthusiastic backers beyond Team Irvington, who maintain that the support he receives from Beasley and company should not discount his toughness and independence.

"I’ve known Gene for a long time," said union leader Assemblyman Thomas Giblin (D-Essex). "This is a stand-up guy who was president of the Bronze Shields, a group of black law enforcement officers. He would make a good council person. I think Gene’s his own man, who’s demonstrated that he can think for himself."

Giblin admitted Lyons stands up for people as a councilman.

"But at the end of the day it’s what you accomplish, and you have to build relationships," Giblin said. "At this stage, Gene has a decent relationship with Rice. When you look at his resume with the Marine Corps and law enforcement, he’s almost like Ronald Rice reincarnated."

The senator’s son, Councilman Ron Rice, breaks with his father on this contest, and backs Etchison over Lyons.

"He’s someone I have a lot of respect for," said the younger Rice. "Gene is not some dreamed up candidate from Team Irvington. If he comes out of anybody’s camp, it’s the detective’s camp."

Regarding Lyons, Rice said, "His ward borders my ward. Irvington needs to do a better job along that 18th Avenue corridor. You have to show some results from all of that gauntlet throwing."

Walking past the municipal building and past the fire house, Lyons alone crossed Springfield Avenue last week and approached Don’s Diner. Leather jacket. Sunglasses. Cap on backwards. Being a police officer, Lyons said, in and of itself does not make a person any more qualified to represent constituents. If Etchison wanted to do something, maybe he should have gone and talked to the police department and tried to help them do a better job, the councilman said with a shrug.

As for what he offers as he seeks a fourth term, "I’ve always been an activist," Lyons said. "That’s what I am. He’s not going to beat me, but if I ever beat these guys and run this town, I’ll be the outsider on the inside. I’ll run it on the inside as the guy from the outside, That’s just who I am." 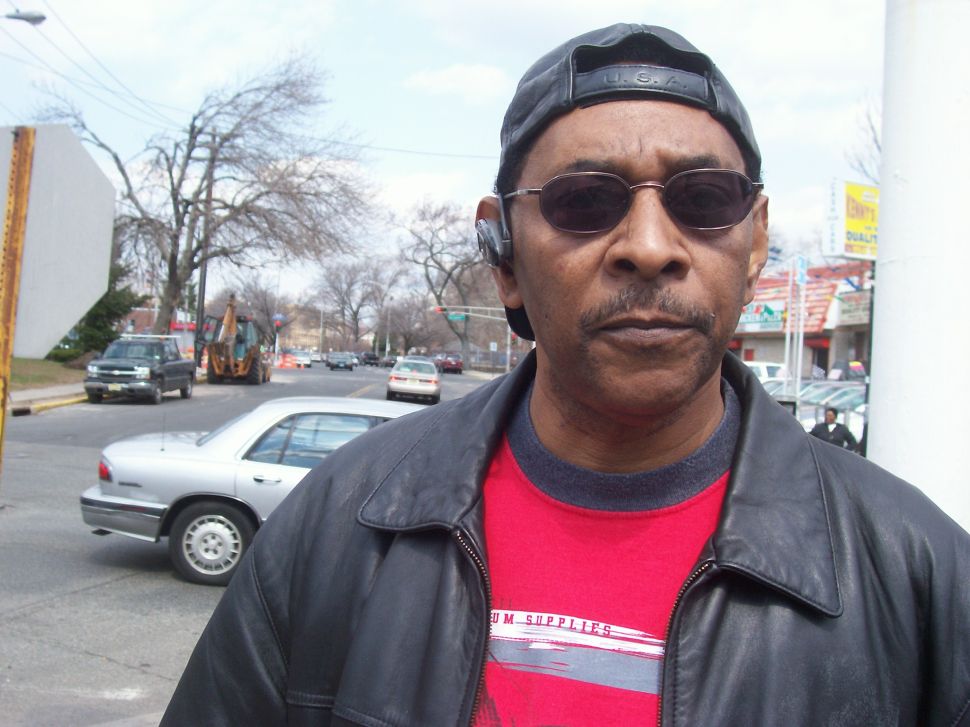