ORANGE – Five candidates for mayor not named Mims Hackett participated in a Citizens for Responsible Government forum at the Appian Way Restaurant here today in front of a crowd of 150 people.

"For a long time these elections have been Hackett against who?" said community activist Nicole Williams, referring to the mayor who ran Orange for 12 years before opting not to pursue re-election amid an imbroglio of federal corruption charges brought against him and ten other elected officials in a statewide sting last year.

"This forum at the very least lets us know we have a choice," Williams said.

Zoning Board Chair Janice Morrell, Planning Board Chairman Dwight Holmes, Councilwoman Tency Eason, West Orange Patrolman Eldridge Hawkins, Jr., and activist Betty Brown each tried to prove why he or she is the best choice for this Essex County city of roughly 32,000 people.

Of those running, only At-Large Councilman Donald Page did not participate in today’s forum.

"I received information about the debate from Karen Wells," Page later told PolitickerNJ.com. "She was one of the organizers of the debate, but she’s also part of Eldridge Hawkins’ team. I had apprehensions about that. But that was not the sole reason I did not participate."

Page said prior to learning about the forum he had purchased tickets to attend the West Orange Civic Association’s annual luncheon, which was scheduled at roughly the same time today as the candidates’ forum.

The event’s main organizer, CRG founderBen Jones, took a lead role in desegregating the local school system 50 years ago as a candidate and then as the first African American councilman in Orange. Today, the 84-year old Jones laments the conditions of his 2.2 square mile city, its budget deficit, state-run school system, high crime and government corruption.

"We are involved now in Orange with problems that are really intense," said Jones. "Almost unexpected, we find ourselves a laughingstock."

Described by community activist Bruce Meyer as "tough as nails" in

her role as chair of the zoning board, 31-year resident Morrell vowed to work with all parties to change the direction of Orange.

She said as mayor she would meet with all of the block associations and neighborhood watch groups to strengthen the relationship between citizens and government as a response to crime.

Morrell argued for ward by ward city planning from the people up, instead of top down – a dynamic that would prove essential for survival as Orange faces state cuts.

"I’m also a person who believes in realism," she told the crowd. "If you’ve taken a look at the budget for the State of New Jersey…we’re in trouble. We’ve lost $1 million in municipal aid. $1 million in extraordinary aid will not be coming. …I’m prepared to deal with the financial agencies that will be facing this challenge."

"I want to continue the progress we have made in a positive manner with the support and help of the residents," said Eason, in what was her closet acknowledgment that the Hackett administration has made more strides than stumbles.

"I will continue to spend time as an ambassador for the good news and hope within our community," said the councilwoman.

Holmes stressed the importance of community input on every development or redevelopment project.

"If you purchase land to build on a property, you have to know how that will impact the people in that area," he said. "You have to make sure you’re benefitting the residents of this community."

An Orange native with a coaching and sports background, Holmes pledged to make a special effort to reach out to the city’s troubled youth.

Brown said she would aggressively search for what developers could give to the city in the way of scholarships, computers, or adopt-a-school funds.

have, in terms of schools, police, fire. All of that is going to cost us more money.

The youngest candidate at 28, Hawkins promised a break from the immediate past both by invoking the richness of Orange’s history and geographic possibilities, and highlighting his professional record as a police officer with a degree in business.

To a city struggling with gang violence andhammered bynews that Hackett allegedly took a $5,000 bribe from a dummy insurance company, Hawkins said, "I stand before all of you as the only candidate with the law enforcement experience to solve the crime issues facing this city; the only one that is a licensed realtor who can address the tax issues, and rateables and redevelopment issues."

Hawkins said he would work to increase the city’s tax base by examining redevelopment projects such as condos and artists lofts, and new businesses on Main Street.

He allowed himself one dig at Page, when he referred to "those candidates who didn’t show up."

The event’s moderator, Mindy Thompson Fullilove, a professor of psychiatry at Columbia University, shrugged off her mistaken reference to "Donald Payne," instead of "Donald Page," by telling the audience that in any case they would "see his name on the ballot."

When she made a play for Orange pride by saying she was certain after the election that everyone on the stage would pull together for the betterment of Orange, a grinning Holmes, who was holding the microphone at that moment, didn’t skip a beat.

"As your mayor, I’ll welcome it," he told the crowd. 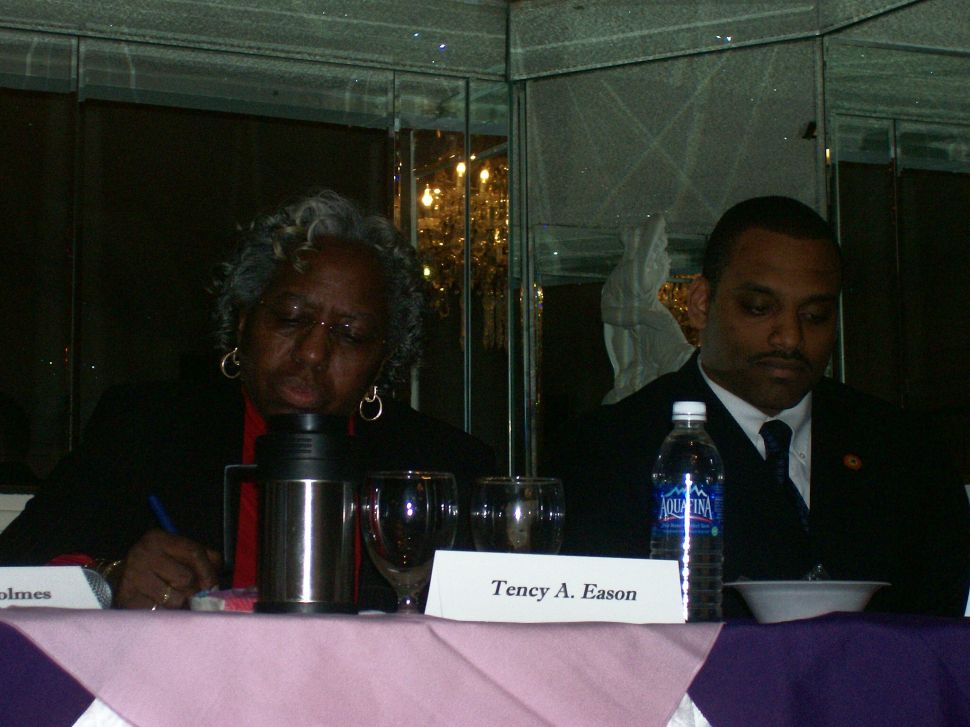