WESTFIELD – The word going into that first round of voting at the Union County Republican Convention on Saturday was that former Summit Councilwoman Kelly Hatfield and Scotch Plains Mayor Martin Marks would require a second showdown.

"This is going to a runoff between the top two candidates," said John DeSimone, commissioner for the county Board of Elections as he waded

into the crowd of delegates. And that’s exactly how it went down at Westfield High School, where Hatfield eventually prevailed over Marks with 60% of the vote in the Union County GOP’s pre-primary battle for the line in the 7th District Congressional race.

In her remarks to the crowd, Hatfield called for spending cuts – "something that Jon Corzine and the Democrats can’t seem to do," in her words. She called for the elimination of the alternative minimum tax and the death tax. She wants the line item veto for the president, earmarks reform, and permanent Bush tax cuts.

Marks had the same game plan – with a pro-life, pro-marriage between man and woman twist. He also gave President George W. Bush the only ’attaboy of the day. "We should thank our president and our military," said Marks, raising his voice over applause. "Our media won’t do it but we should do it right here." Moreover, he pledged to give undocumented workers "no special privileges."

"I am your across the board conservative Republican candidate," said Marks, the outspoken, hard-right contestant in the field who some years ago called both GOP and Democratic elected officials "cowards" for failing to adequately address the state's property tax crisis. Some Republicans took offense at Marks' same breath, bipartisan blast.

Asked after Saturday’s loss if that charge had flared up in his face, the Scotch Plains mayor said, "I didn’t blast local politicians; if some local politicians want to take what I said personally, that’s there problem."

Three-hundred and ninety-eight committee members from 19 towns were present to vote in the contest, in addition to 12 at-large members. Some of them cleared out when they looked at the line stretching from the auditorium to a room adjoining the cafeteria, where four Sequoia voted machines (three for the 7th Congressional District race and one for the Senate race) waited.

Going into today’s contest, Hatfield had an edge on Marks in the two towns where the concentration of delegates is biggest: her hometown of Summit, home to 60 delegates, where she also had the help of Summit resident Assemblyman Eric Munoz (who was wearing a "Hatfield" sticker on Saturday); and Westfield with 57 delegates, where Assemblyman Jon Bramnick was robo-calling on Hatfield’s behalf, working hands and making the eyeball to eyeball sale. Marks’ Scotch Plains was next in the delegate count with 44, followed by Cranford (43), Clark (33) and Rahway (25).

Senate Minority Leader Thomas Kean wandered the delegate-packed halls of Westfield High School with a "Lance" sticker on his jacket lapel, plugging the former Senate Minority Leader to small circles of Republican rank and filers. At the podium, when he put Lance’s name in contention, Kean said, "He is an individual with whom I’ve worked, both on the budget committee and on the floor of the Senate. He offered me guidance, and stood up for principle time and again. He’s a leader on the environment, and a great, great friend."

Lance and his campaign liked their third place finish behind Hatfield and Marks in the first round of balloting, and when the other five candidates (Bridgewater Councilman Michael Hsing did not participate in Saturday’s convention) had cleared out of the auditorium, Lance lingered.

Iraq War veteran Thomas Roughneen in his remarks introduced his Blackhawk Helicopter pilot brother to cheers that obliterated earlier groans when the Irish-American admitted his family is friends with Democratic Assemblymen Joseph Cryan and Thomas Giblin. Having changed his party affiliation to Republican last year, Roughneen said there isn’t much ideologically different among the crowd of candidates, other than perhaps varying stances on the abortion issue.

"Where I stand out is with my military background," said Roughneen, a Bronze Star winner who served in the Sunni Triangle and in Kurdistan. "I love Iraq. It wasn’t just the challenge. It was the culture – being in the cradle of civilization."

Businesswoman Kate Whitman, daughter of former Gov. Christie Todd Whitman, took a second loss in as many contests since Monday, but argued she has raised a quarter of a million dollars and would offer the most energetic opposition to likely Democratic nominee Assemblywoman Linda Stender.

"It’s a setback," Whitman spokesman Anthony Attanasio said of the loss in Hunterdon County earlier in the week. "In the end, we’ll have the most resources to get our message out there."

Attanasio acknowledged that people criticized his candidate for officially kicking off her campaign on the same day Gov. Jon Corzine unveiled his 2009 budget, but Attanasio noted, "We got front page coverage in all the papers and we sent out those clips to the doubters as proof."

the Italians in the room to vote for a fellow paisan, and received a tricorn-hatted nod back in the crowd from William Sanders, executive director of Portraits Patriots, when the Boston-native invoked the Boston Tea Party.

Now Sordillo, Whitman, Lance, and former Hillsborough Mayor Chris Venis all said they would be vigorously campaigning in Somerset County, where each harbors a belief that he or she can win – or be competitive.

But today was about the Union County candidates, and in the end, Hatfield specifically. "I think it’s a great momentum builder for Kelly going into Middlesex," said campaign manager Ben DeMarzo. "Having this show of support in Union is going to help a lot." 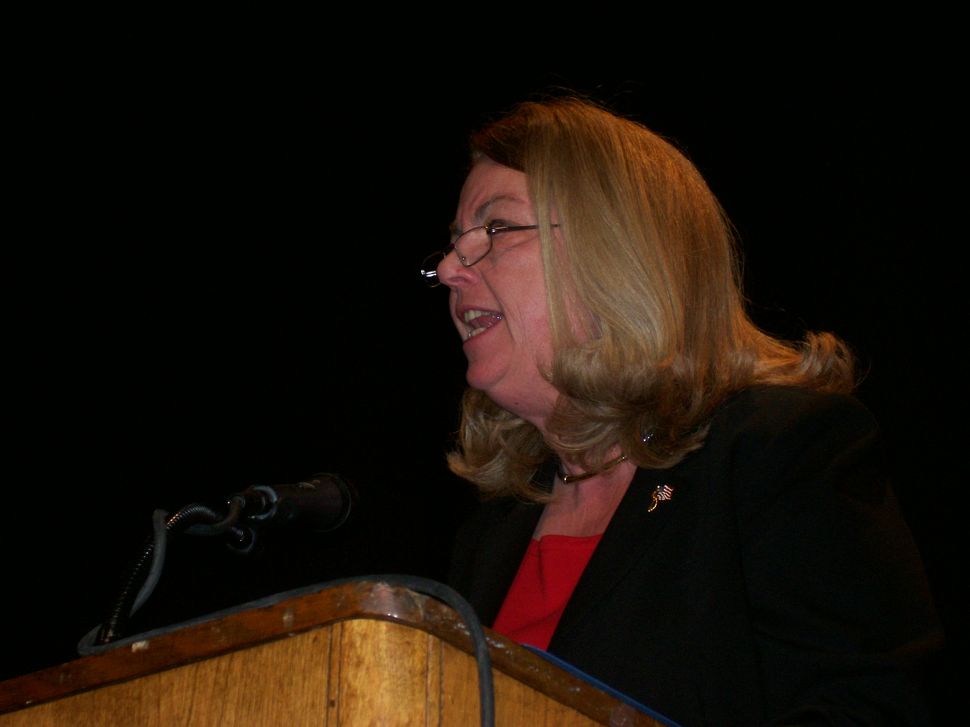