In 1980, 52-year-old Washington State Attorney General Slade Gorton , a Republican, rode Ronald Reagan's presidential coattails to unseat long-term Democratic incumbent Warren Magnuson, who at 75 years of age had served in the Senate since 1944.

"It was an issue, but it was an issue that we dealt with only extremely delicately," Gorton, now an 80-year-old lawyer in Seattle, told PolitickerNJ.com in a phone interview. "The theme of the race was to give Warren Magnuson a gold watch, and we treated it that way all along."

The Gorton campaign managed to capitalize on Magnuson's age, but not blatantly. They even passed up the opportunity to use footage of Magnuson taking 30 seconds to descend a few steps of an aircraft while visiting the aftermath of the Mount St. Helens eruption.

Instead, Gorton ran a commercial that noted that Henry M. "Scoop" Jackson – the state's other, younger Democratic Senator who was not up for re-election – was 68-years-old. By telling viewers Jackson's age, they implicitly reminded them that Magnuson was even older.

"It said… ‘Isn't it time to start building new seniority for Washington while we still have Scoop Jackson around to help us?' It was a marvelously clever ad," said Gorton. "They all knew that Magnuson was older than Jackson. For all practical purposes, it was the only way we dealt with age."

Here in New Jersey, age is by all accounts a major issue in this year's Democratic Senate primary. And like Gorton, Rep. Rob Andrews needs to find a way to remind voters that incumbent Frank Lautenberg is 84-years-old without saying it outright.

Since long before Andrews rose up to challenge Lautenberg in the primary, the senator's advanced age has been one of his biggest weaknesses. Poll after poll has shown voters having serious reservations about reelecting a Senator who will be 90 by the time his term is up.

"When you boil it down, this is one of the few areas where there's some possibility of finding a chink in Lautenberg's armor among Democratic primary voters," said Monmouth University pollster Patrick Murray.

Murray's own poll on the subject showed that voters didn't seem to care much about Lautenberg's age. The difference, Murray said, is that other polls mentioned Lautenberg's specific age before asking if it would affect their votes. If voters are reminded of that, they do care.

"There's no question about this that age is the issue and they're trying to figure out some way to get to it, understanding that it's only an issue for voters if voters think that Lautenberg does not have his full faculties," he said.

Andrews seems keenly aware of that. But he also knows that he has to approach the issue with caution, even though Lautenberg did bring up the age issue during his first run for office against then 72-year-old Rep. Milicent Fenwick in 1982.

"The entire message of his campaign was that she was too old to be a Senator when she was 72," said Andrews. "I'm not going to do to him what he did to Milicent Fenwick, but he's going to have to explain what he did all those years."

From the moment he stepped into the Race, Andrews said that he respected Lautenberg's record but that he was the candidate with the "energy" to get more things done. And in an interview with the New York Times last week, Andrews said of the Democratic presidential field: "'Whoever our nominee is, public polls show that New Jersey is in play, and we're going to need a high-energy, vigorous campaign 24/7 to deliver New Jersey for that candidate.''

E-mails to the press from Andrews's campaign consultants have been much more blatant about age. One read that "in 1999, Lautenberg said he didn't want to go through the ‘rigors' of another campaign… He was right then and it shows now."

Assemblyman Anthony Chiappone (D-Bayonne), who bucked the Hudson County Democratic establishment to support Andrews, was upfront about Lautenberg's age in an interview with PolitickerNJ.com last week.

"They brought Frank Lautenberg out of retirement for that seat, and I just think it's time to put someone in that position who is more physically and enthusiastically able," he said. "Frank Lautenberg should be happy about his career and step aside."

Andrews, for his part, said that the voters will decide whether Lautenberg is too old to effectively serve out another term. But he said he's heard the issue raised many times by voters during campaign stops.

"I will tell you that many people that I meet bring the issue up, and I think if the Senator was actually out with people he will hear it as well," he said.

And perhaps the most effective way to contrast Andrews's relative youthfulness with Lautenberg's golden years would be to engage in a series of debates – something Andrews has been pushing hard for over the last two weeks.

But Lautenberg spokeswoman Julie Roginsky said that Andrews's campaign against Lautenberg is focused on age only because he can't hit the incumbent for being an ineffective senator.

"The issue is age. It's not effectiveness," she said. "That's underscored more than anywhere else by the fact that Frank Lautenberg is busy working in the Senate for people rather than politicking everywhere else." 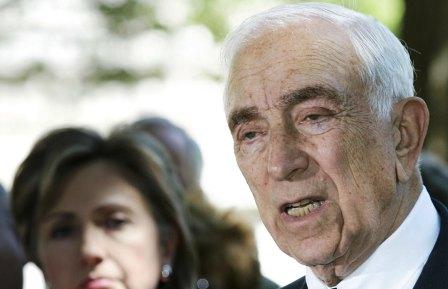