Most incumbents are favored to win re-election in the 2009 State Assembly elections, which bodes well for Speaker Joe Roberts’ re-election prospects. At the most, ten seats are in play – eight Democrats and two Republicans – and it will take some recruitment homeruns to substantially alter the political playing field next year. For the Republicans to win control of the Assembly, they would have to oust incumbents in Districts 1, 7, 14 and 36 – these eight seats would mean a split 40-40 Assembly – and knock out one incumbent from the safe list.

Democrats Nelson Albano and Matthew Milam are slightly more vulnerable in the first district because State Sen. Jeff Van Drew won’t be on the ballot. But the absence of State Sens. Diane Allen and Bill Baroni, who have not had coattails in the past, makes incumbent Democratic Assembly members even safer. In District 36, where Democrats Frederick Scalera and Gary Schaer won surprisingly close re-election bids last year – Republicans could have an opportunity because there will be no Democrats from the Bergen County portion of the district on the ballot.

No Assembly retirements have been announced at this point, although John Rooney, a Republican from Bergen County, has hinted that he won’t seek re-election to the seat he has held since winning a 1983 special election.

Four legislators are on the primary ballot this year, and there could be some changes in Trenton by January: State Sen. Joseph Pennacchio is running for the U.S. Senate, State Sen. John Adler is seeking a House seat in the third district, and in District 7, there could be a general election contest between State Sen. Leonard Lance and Assemblywoman Linda Stender. All four come from safe districts.

The greatest threat to many of the incumbents comes in primary elections. Keep an eye on Harvey Smith and Anthony Chiappone in Hudson, and on Valerie Huttle and Gordon Johnson in Bergen. 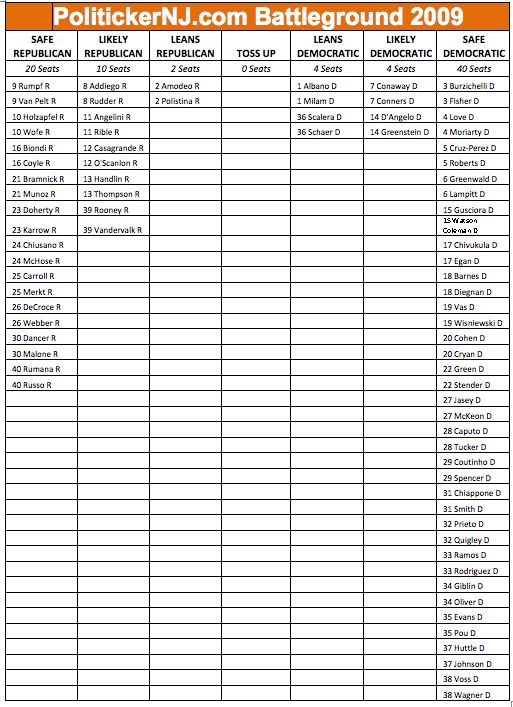