Congrats to Mark from Maryland for this week’s winning caption.

Thomas Jefferson brings it back to the Hamilton and Burr duel where Burr killed the former Secretary of the Treasury over an argument at a dinner party. Burr, who survived the duel, faced harsh criticism and animosity for killing the popular Hamilton, and it brought about an end to his political career.

We don’t fight to the death any more, but with either Obama or Hillary end up being this election’s Aaron Burr and face rebuke from party loyalists who supported the defeated candidate?

Here are the runner-ups:

“If one of them isn’t careful, they are going to break the glass ceiling.”
– Cindi from Maine

“Life, liberty and the pursuit of the presidency.”
– Douglas from New Hampshire

“And I thought National Treasure 2 was the worst thing I've seen on TV!”
– Fabio from Budd Lake, New Jersey

“How in the world did we get a television?”
– Anonymous Federalist from Maryland

Thanks for all your entries, whether commented or emailed. Check back Monday for a new caption contest. 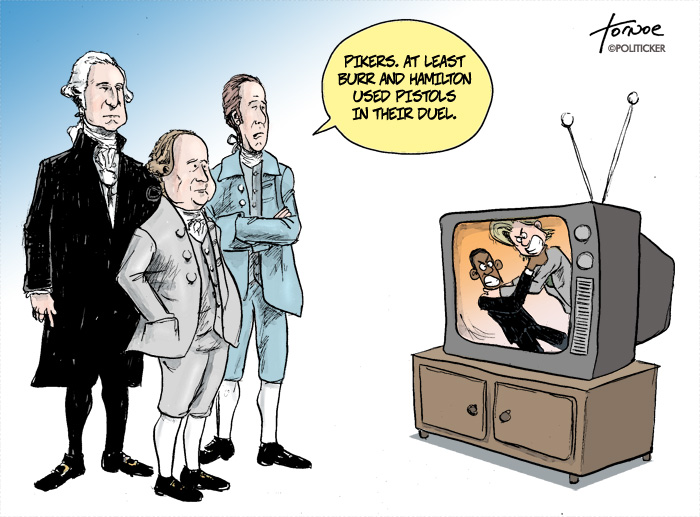