On a conference call among high-level Clinton staffers on the morning of April 7, longtime adviser Mark Penn was arguing about a proposed advertisement for Hillary Clinton.

“Mark, Mark, Mark,” said Geoff Garin, a pollster who had taken over some of Mr. Penn’s duties as chief strategist, as Mr. Penn continued to press his point. “A decision has already been made.”

The mighty Mark Penn had been shot down.

The exchange, recounted by a campaign source who was on the call, was perhaps the first concrete indication of a post-Penn era of sorts in the Clinton campaign. Before Mr. Penn was officially stripped of his title as chief strategist on the evening of April 6, he was the one aide with an effective veto over the message-related and tactical ideas of other top advisers, several Clinton staffers said in interviews. Now, they say, he is relegated, at best, to co-equal status with all the other aides called upon regularly to offer their two cents.

“He’s just a voice among many voices, and that’s not a bad thing for the campaign,” explained one of the few remaining Penn sympathizers within the campaign.

For what seems to be a very heavy majority of Clinton supporters and staffers, Mr. Penn’s public dressing-down was cause for unalloyed joy—a clean end to an era in which a man they loathed, professionally and personally, had free reign over the public direction of the presidential bid.

“He was already on fairly thin ice within the campaign, where his effective role had already been largely diminished,” said Hassan Nemazee, one of the campaign’s national finance chairmen. “There is a general rule that also applies to business and life: ‘If you give good advice, you are on solid ground. If you give bad advice, you are on very thin ice or you are not around anymore.’”

Certainly, the campaign staffers who professed to be happy that Mr. Penn’s apparent removal insisted that their bête noire had been well and truly neutered.

“Every little ad and direct-mail and radio spot and speech had to have Mark’s approval on it—he could look at everything he wanted,” said one. “That’s no longer the case.”

Of course, there are other channels to Mrs. Clinton, and given Bill Clinton’s close relationship with Mr. Penn, the only people who know for sure how gone he really is right now are the candidate, the former president and, presumably, Mr. Penn, who lost his title as chief strategist after it was revealed that he had met with Colombian officials, in his capacity as the chief executive of the global public-relations firm Burson-Marsteller, to push a bilateral free trade agreement that his other client, Mrs. Clinton, opposes.

He is still officially polling for and advising the campaign, and, the Clinton campaign says, is still on the payroll. But Mr. Penn’s participation on the morning internal conference call the day after his sentence was curtly pronounced, via press release, by campaign manager Maggie Williams, was minimal and enfeebling. According to one Clinton aide with knowledge of the day’s conference calls, he did not participate in any of the calls on April 8.

The irony is that in recent weeks, as the campaign was forced to concede the race for elected delegates and endured a slow leak of undecided superdelegates to the Obama camp, Mr. Penn actually sought to minimize his role in bringing Mrs. Clinton to this point. And his few allies maintained that the problem with the campaign was that a campaign-by-committee atmosphere diluted his authority. It was up to others, like longtime Clinton confidante and Penn rival Harold Ickes, to point out that Mr. Penn was, in fact, running the show.

“It’s pretty plain for anyone to see that he has shaped the strategy of the campaign. He has called the shots,” Mr. Ickes told The Observer on Feb 28.

“Mark Penn,” he said, “has dominated the message in this campaign. Dominated it.”

Numerous Clinton aides interviewed for this story insisted that that arrangement has been rendered inoperative by this week’s developments, and expressed hope that Mr. Penn’s relative absence would clear the way for others—particularly communications director Howard Wolfson and Mr. Garin, the pollster—to take the fading campaign in another, more unapologetically liberal direction.

“This is a victory for Howard personally. They were both competing to be the message person; it was frustrating to him to the point of him going nuts,” said one staffer. “I see it as a win for the progressive wing of this campaign. You work on this campaign and you become branded as centrist because Mark was a centrist.”

“This opens up a vacuum in the campaign that will be filled with people who I think have a vision for what the campaign needs to be doing and where it needs to be going right now,” said another staffer. “People who realize that the strength-and-experience box, while an important one, has been checked, and that it’s also important for voters to know what motivates Senator Clinton.”

Another Clinton staffer said that the fundamental message of the campaign, that Mrs. Clinton was a champion of the middle class offering concrete solutions, compared to Barack Obama’s higher-falutin, less specific promises, would remain the same. What would change, the staffer said, would be the implementation of “different ways to illustrate the message—different ways to humanize the message.”

The staffer said that of the multiple economic round tables in which Mrs. Clinton had participated in Pennsylvania in recent weeks, the ones in which she was surrounded by economics professors and other experts were arranged by Mr. Penn to show off her experience and fluency with complicated policy issues. Mr. Wolfson and company had pushed for the ones in which she shared the table with “regular people” talking about their economic woes.

For his part, Mr. Penn—who declined to comment for this article—has tried to maintain an air of normalcy.

According to a Huffington Post reporter who listened in on a Burson-Marsteller conference call on April 7, Mr. Penn assured his employees that “the situation has played itself out.” (It’s too soon to tell whether his position as Burson-Marsteller’s CEO has been adversely affected by the recent negative publicity, or from the Colombian government’s subsequent decision to terminate its contract with the firm.)

If anything, it has been Mrs. Clinton who has had the harder time explaining Mr. Penn’s change in station.

On April 8, during a sweep through the morning shows, Mrs. Clinton received softballs and admiration from MSNBC’s Joe Scarborough before fielding one question about whether Mr. Penn’s demotion sufficiently severed his ties to the campaign. “We did take appropriate action on behalf of the campaign,” Mrs. Clinton said.

A few minutes later, she appeare
d in the same seat and in front of the same vase of pink flowers on CNN, where she received a tougher round of questions about Mr. Penn’s portfolio. Again she started by saying, “We took appropriate action in the campaign,” and acknowledged having received calls from “a number of my friends,” meaning labor leaders. “But I had already determined what action we were going to take and we took it,” she said.

She complained that she was being harshly treated by the media, and contrasted her treatment of Mr. Penn with the Obama campaign’s treatment of Austan Goolsbee, who retained his post of economic adviser after it was reported that he privately assured Canadian officials that Mr. Obama, contrary to his public stance, favored free trade.

A little bit after 8 a.m., Mrs. Clinton appeared in front of a large sign that said “Labor 2008” and addressed a large crowd of union members at a Communications Workers of America conference in a Washington Hyatt, at which both Democratic candidates were scheduled to speak. She spoke glowingly of the labor movement, saying its members made it possible for her to talk on the phone, mail, drive and fly around and stay in hotels on the trail.

She then addressed the matter that got Mr. Penn into trouble directly.

“No trade deal with Colombia while violence against trade unions continues,” she said, to shouts of approval and applause. She added, “As I have said for months, I oppose the deal, I have spoken out against the deal and I will vote against the deal, and I will do everything I can to urge the congress to reject the Colombian trade agreement.”

A few moments later she used a line widely attributed to Mr. Penn.

“Sometimes when the phone rings at 3 a.m. in the White House, it is an economic crisis,” she said.

In the few minutes after she finished speaking and before Mr. Obama took the stage and emphasized his own opposition to the Colombian trade agreement, Greg Badini, a 50-year-old union member from Flemington, N.J., who was standing in the back of the room, said that Mrs. Clinton’s decision not to completely sever ties with Mr. Penn “concerned” him.

When asked if it would factor into whom he would support, he said, “It definitely would.”

“It’s damage control,” said Michael Cullen, a 56-year-old union member from New Jersey. A Clinton supporter, he said it didn’t make sense for Mrs. Clinton to completely deny herself Mr. Penn’s services. “When you are running full-blast at the end, you are going to get a new guy to come in and change everything? Changing gears right now could be fatal.”

Fritz Clark, a 73-year-old union representative from Elmira, N.Y., who voted for Mrs. Clinton, also said the campaign was too far along now to change the strategist.

“I’m sure his influence is still going to be there,” he said.

After the union event, Mrs. Clinton traveled a few blocks to the Dirksen Senate Office Building and took a seat on the edge of a crescent of senators listening to testimony from Gen. David Petraeus about the progress of the surge in Iraq.

After Mrs. Clinton finished questioning General Petraeus in the Senate room, reporters spilled out to follow her down the hallway and stairwell. She responded to questions about goal posts moving from Iraq to Iran, and said Iraq had been given a “blank check” by the Bush administration and raised questions about the expanded “military options and commitments in southern Iraq.”

Shortly afterward, she was asked, twice, why she was keeping Mr. Penn on the campaign and whether his influence had waned. She had nothing to say, and walked out the door. 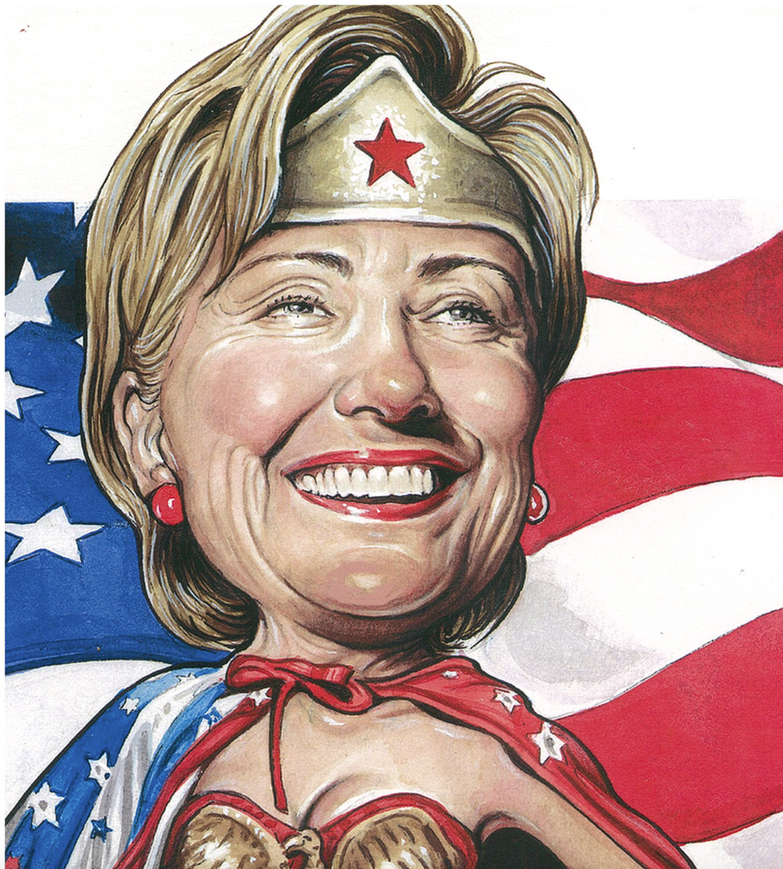