PATERSON – Hamilton never ran against Washington but if he had he probably would have given him fair warning.

"I don’t think it was healthy," said the congressman, standing in Overlook Park above the Great Falls in Paterson on Saturday morning. "The way he waited until the end causes animosity."

Pascrell said Andrews gave his word not only to U.S. Sen. Frank Lautenberg, but to the other Democratic members of the congressional delegation that he wouldn’t run.

They he ran anyway against Lautenberg.

"The animosity will be healed," said Pascrell. "This is one state. Anybody who wants to try to divide it between north and south should move to another state."

Pascrell said the fact that both of New Jersey’s senators are from the state’s northern region doesn’t diminish their ability to deliver for the entire state.

"I’m from North Jersey," said Pascrell, "and in the last budget, I did everything I could to help South Jersey hospitals."

Pascrell appeared in the park on the day he welcomed House

Speaker Nancy Pelosi (D-CA.), to New Jersey to attend a private fund-raiser for the Democratic Congressional Campaign Committee. Pelosi and the Democrats are looking to supplement a special House race in May in Louisiana, in addition to general election contests in November.

Prior to their departure for the Clifton fund-raiser, Pascrell and Pelosi toured the area of the Great Falls with Paterson Mayor Jose "Joey" Torres as Pascrell hopes to nail down federal support for his Paterson Great Falls National Historic Park Act.

"It’s already passed in the House, and now senators Lautenberg and Menendez are trying to get it passed in the Senate," said Pascrell. "We want the park service to be here. We want the federal government to commit to this."

Robert F. Guarasci, president of the New Jersey Community Development Corporation, said Paterson had received $100,000 from Wachovia to undertake a neighborhood planning project in anticipation of the national park designation.

"The general feeling is that if it’s part of a large omnibus bill it will pass in the Senate," Guarasci said of the Paterson Great Falls National Historic Park Act. "This is a once in a lifetime opportunity."

Said Torres, "A vote of confidence in the Senate will go ahead and allow us to add that other component we’ve been looking for in conjunction with the state park here. We’re on our way to greatness."

Declining a walk on the catwalk directly above the falls, Pelosi contented herself with a view from beneath the statue of Alexander Hamilton in Overlook Park as she spoke with Americorps, Youth Corps and Senior Corps volunteers.

"I’m not a fan of heights," said the speaker, who learned that Paterson was responsible for 70% of the country’s locomotive manufacturing during the 1800s.

Torres also reminded her that Hamilton, who spearheaded the Society for Establishing Useful Manufacturing, was an immigrant who recognized that the United States could not depend on foreign trade.

Pascrell added, "Madame Speaker, the person who laid out Paterson, laid out Washington: L’Enfant. So we know who to blame."

It didn’t hurt that Pelosi’s chief of staff, John Lawrence, went to East Side High School in Paterson. But Pascrell made sure the small crowd was aware of yet another connection the speaker had with the Silk City.

"You know where the speaker’s from?" he asked them.

"San Francisco," was the answer.

"She represents San Francisco," said Pascrell, "but she’s originally from Baltimore, another American manufacturing town. She’s one of us." 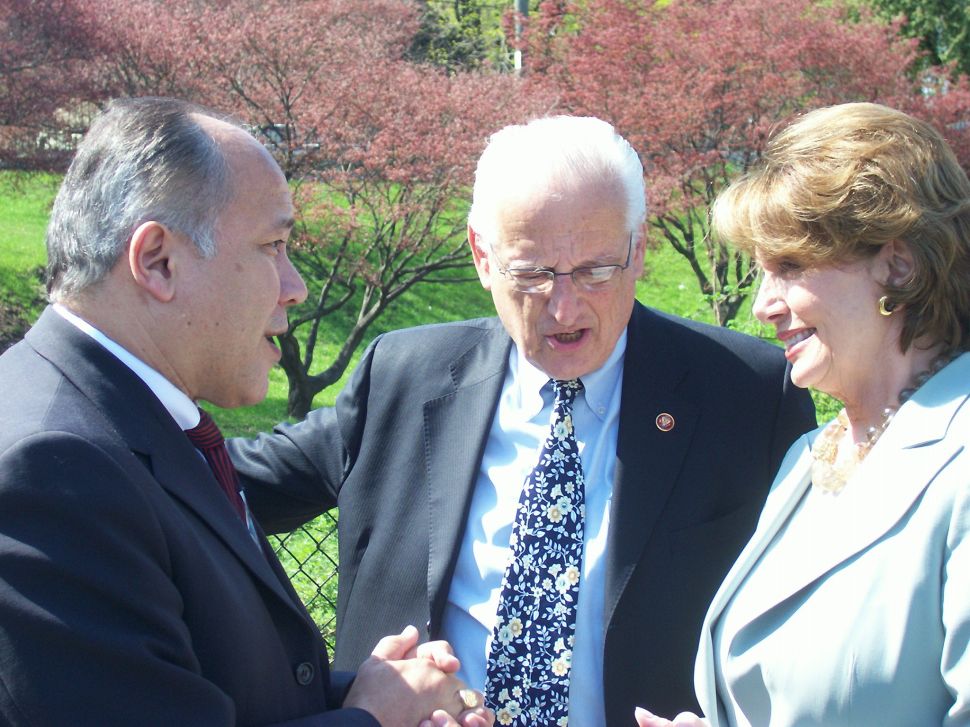