PRINCETON – The crowds flowed onto Nassau Street for Communiversity Day and in their midst at one time or another moved two politicians, intent on making contact with voters.

Cruising through the swarm of people at the blocked-off intersection of Nassau and Witherspoon, U.S. Sen. Frank Lautenberg (D-NJ) projected the image of a relentless white-haired pavement-pounder and man of the people. Hailing him as their 84-year old wonder, the senator’s handlers say by contrast his underdog rival’s frequent public appearances belie desperate backroom and courtroom campaign machinations.

As U.S. Rep. Rob Andrews (D-1) faces a decision tomorrow in his challenge of statewide balloting procedure, Lautenberg shakes his head at his younger rival’s strategy.

“If he persists in staying in court, it tells you what he thinks about campaigning,” said the senator in between embraces and hand shakes on Nassau Street. “He’d rather campaign in the courtroom than on the streets.”

Andrews, 50, who has keynoted numerous events in the past few weeks, many of them in northern New Jersey, says his advantage in the campaign is that he is actually talking to voters.

Yes, he questions county ballots that give candidates endorsed by party organizations a decisive, column A edge, while leaving those without the line in ballot limbo land. But he insists that his courtroom efforts are merely one facet of a campaign attack heavy on voter outreach.

“Look, we want the fairest ballot position we can get,” said Andrews, standing in the middle of Witherspoon Street amid the crowds. “This is an important tactic, but we’re not going to win this race on tactics.”

Lautenberg’s people have maintained from the start that the South Jersey congressman has no recourse against the incumbent but to make the contest about process rather than issues.

In this regard, they say, the Andrews campaign has stumbled early on two significant fronts: first in the congressman’s efforts to secure vital organizational lines in Essex and Bergen counties through leveraging the muscle of bosses Steve Adubato and Joseph Ferriero; second, in Andrews’s courtroom gamble to force Lautenberg’s name to be bracketed on the primary ballot with Andrews’s and that of the other Democratic challenger in the race, Morristown Mayor Donald Cresitello.

Failing his own attempts to win column A support in key counties, and hoping to nullify the advantage Lautenberg enjoys by having powerful northern organizational support, Andrews filed suit in state Superior Court.

The lawsuit to date has not gone well.

Last week, Superior Court Judge Mary Jacobson denied the congressman’s argument for what Andrews’s people say is ballot fairness in the court’s chancery division. His lawyers appealed, and on Monday an appellate judge is expected to issue a ruling.

Andrews’s lawyers argue that the judge should consider the precedent of state statute 19:23-26.1, which then-Gov. Brendan Byrne signed into law in 1981.

“What the statute says is all U.S. Senate candidates or gubernatorial candidates must appear on the same line or column,” said Essex County Clerk Christopher Durkin. “But the lawmakers were not specific enough, as their understanding was based on different ways that the counties have set up their ballots.”

Thirteen years after it became law, a U.S. Senate incumbent challenged Byrne’s law as he sought ballot alignment with party organizational strength in that year’s primary.

The candidate was Frank Lautenberg, whose lawyers used Constitutional law to effectively supercede the statute signed by Byrne, thereby enabling the senator to run on the line with all of the organization candidates under him, and preventing opposition primary candidates from being bracketed with him on the ballot.

Whatever happens tomorrow, both candidates say publicly that their efforts on the streets will count for more than the courtroom come June 3.

The congressman insists his face to face forays into the north country with allies like Assemblyman John Wisniewski (D-Middlesex) and Assemblyman Anthony Chiappone (D-Hudson) put him into contact with voters who are responding to his energy and ideas.

“We’re going to win it (the race) on substance, and I just answered questions for two hours from Middlesex County voters about jobs, health care and Iraq,” Andrews said Saturday, shortly after his arrival in Princeton.

But Lautenberg and his supporters stifle a laugh on that point, for they continue to argue that Andrews in fact experiences his greatest trouble on the issues as he strives for statewide support, particularly considering the congressman’s co-sponsorship of the resolution authorizing President George W. Bush to go to war in Iraq.

The reason he needed the northern lines – either through the bosses or through judges – was precisely because he stands to the right of most Democratic primary voters, Lautenberg argues.

“As far as I’m concerned, he’s kind of sunk now,” said the senator. “He’s sunk by his past record of support for the war, of working with Newt Gingrich on Contract with America. He’s sunk because he doesn’t represent the views of the people of New Jersey.”

As yet another mother passed her baby into the arms of the senator on Nassau Street, members of Lautenberg’s entourage beamed.

Moments after Lautenberg rose from going eye-level with a little girl, an elderly woman clutched his hand and ardently pledged her support.

“He’s been a good senator and I’m happy to have him continue,” Phyllis Zuber of Princeton Township told PolitickerNJ.com. “I understand he’s very fit and I don’t see that (Lautenberg’s advanced age) as a factor. It doesn’t bother me at all.”

Even as they basked in Lautenberg’s public glow, the senator’s supporters winsomely knocked Andrews, who would make his own low-key appearance on the same carnival-congested streets in another couple of hours.

“I would say Rob has a poor profile for a Democratic primary in New Jersey,” said U.S. Rep. Rush Holt (D-12) as he followed the smiling Lautenberg through the crowd.

Referring specifically to the war resolution, which Holt did not support, the congressman added, “You’d like people to represent you who got it right on that.”

Assemblyman Reed Gusciora (D-Mercer) also said he has a difficult time getting around Andrews’s role as an architect of the Iraq War. He knows Lautenberg publicly declared his support for the war while he was out of the U.S. Senate, but Andrews actually co-authored the resolution.

“It’s America, he can run if he wants to, I just think he’d be better off running as a Republican,” Gusciora said with a shrug.

As for Andrews’s efforts to be bracketed on the ballot with Lautenberg and Cresitello, Gusciora noted that the congressman never complained about having the organizational line himself in those southern counties he represents, effectively relegating no-hope status to primary challengers.

For the record, Andrews’s lawyers argue that the legal precedent in their case is specific to statewide races.

When it was his turn to work the Princeton streets on Saturday, Andrews shook hands, but did not work the crowd with the plunge-effect employed by Lautenberg, who engaged people either manning or clustered around every booth on the southern end of Witherspoon and the western side of Nassau.

Andrews knew fellow politicians in Princeton, but couldn’t command the same friendly-presence recognition that Lautenberg – statewide for over two and a half decades – radiated among the masses.

At one point, as he strove to make contact in front of the booth set up by the Princeton Community Democratic Organization, Andrews spied the familiar smiling face of Princeton resident Thomas Byrne, former state party chairman and son of former Gov. Byrne.

A political animal who possesses ambitions not only for public office, but for specifically Lautenberg’s U.S. Senate seat, Byrne as recently as a few weeks ago probed his own run against Lautenberg. On the day the senator kicked off his campaign, Byrne abruptly withdrew his threat of a primary challenge and announced his support for the senator.

His zero-hour faxed message to State Democratic Party Chairman Joseph Cryan provided Cryan and Gov. Jon Corzine with enough justification to declare party unity. Then Andrews entered the race, unraveling the unity concept as the state split and politicians geared up with either Lautenberg or Andrews.

A day after he abandoned his own exploration of a challenge, Byrne sat down with Lautenberg for lunch at the Theater Square Grill in the New Jersey Performing Arts Center in Newark. He watched as person after person approached the senator with words of praise and encouragement.

A lifelong student of the game, Byrne said he was impressed. But when an elderly lady with an Irish brogue gushed over Lautenberg, the Irish-American political scion shook his head in wonderment.

“I thought to myself that if we had that meeting a few weeks ago, I would have never considered running against him,” Byrne said with a laugh. “If he’s already got the Irish vote, that makes it very tough for me.” 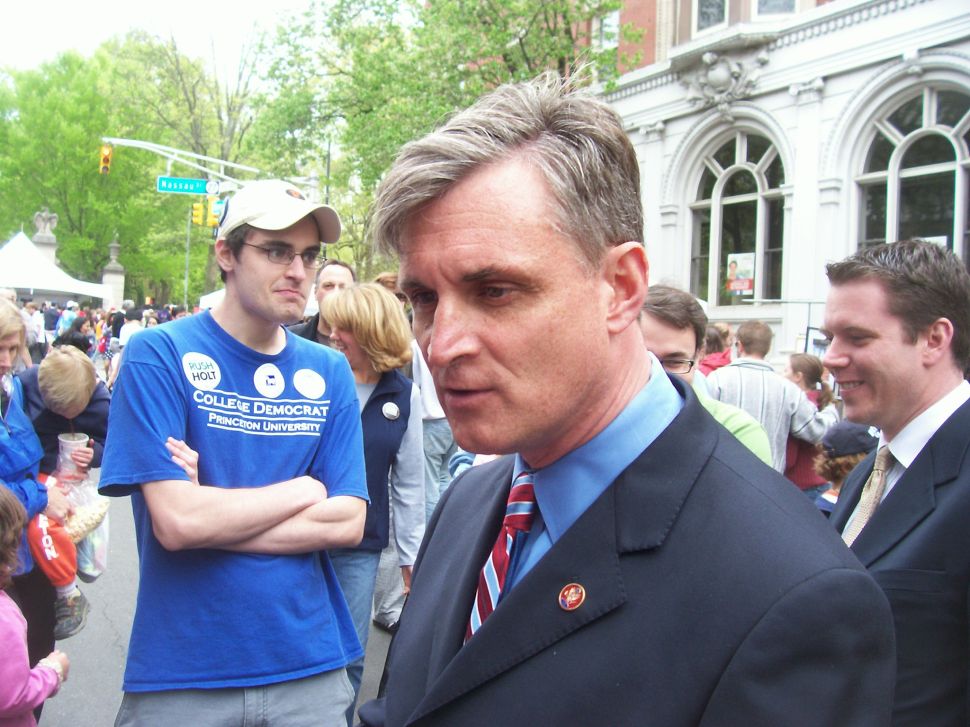