TRENTON – U.S. Rep. Rob Andrews (D-1) kicked off his campaign for the U.S. Senate here today in the State House Annex, boasting a plan to get America out of Iraq, a record in opposition to what he cited as damaging trade agreements, and a specific strategy to provide people with better heath care.

“Since the first of the year, 10,000 New Jerseayans have lost their jobs, 70 people who are connected in some way to New Jersey have lost their lives in the ongoing carnage of Iraq, tonight more than 1 million New Jerseyans will go to bed without health insurance,” said the 50-year old Andrews, who is challenging U.S. Senator Frank Lautenberg in the Democratic Primary.

“I’ve never seen a time in our country’s history when change is needed more urgently than it is now,” added Andrews, who on several occasions today referred to himself as the “change” candidate.

Surrounded by family members, including his wife, Camille – who is running for the U.S. House seat he is abandoning to pursue his senate run – and daughters Jacqueline and Josie, the ten-term South Jersey congressman from Camden County vowed to be a people’s senator for the entire state.

“This is an election, not a coronation,” Andrews said. “On June 3, Democrats in New Jersey will have a real choice – a choice between the politics of the past and a new, progressive vision for the future. I represent a new generation of Democrats with the experience and enthusiasm to take our party – and our country – in a new direction.”

In the last four days he said he had personally reached out to voters at public events in Newark, West Paterson and Carteret, and what he’s hearing in those northern towns is the same as what he’s hearing on his home turf.

“People tell me how deeply worried they are about their economic future,” said the son of an unskilled dock laborer who served asan adjunct law professor before beginning his career in congress.

“Everywhere they turn, they face skyrocketing costs – whether at the local supermarket or at the gas pump, where filling their tanks has become a luxury,” the candidate said of people statewide. “They are frustrated by the ever-rising costs of health care and prescription drugs. And they are fed up with a war that has dragged on for far too long, costing thousands of American lives and draining our economy.”

While the 84-year old Lautenberg went to the microphones with four women U.S. senators and party brass at a campaign rally in the New Jersey Performing Arts Center in Newark, the Andrews allies noted the absence of other politicians at their candidate’s kick-off in Trenton.

A longtime member of the South Jersey Democratic Organization and friend of powerful political boss George Norcrosss III, Andrews said he is proud of that relationship and does not consider it a hindrance to his being able to convince Democratic voters that he can stand on his own.

“My independence is a matter of record in 22 years,” Andrews said. “I will let the voters be the judge of my record and my integrity.”

While refusing to acknowledge that he could lose in his bid against Lautenberg, the congressman reiterated his promise not to re-occupy his U.S. House seat, which his wife hopes to secure in the Democratic Primary.

Today Andrews highlighted his own plan for withdrawal – delivered publicly 18 moths ago – in contrast to what he said is Lautenberg’s criticism of the war policy without a detailed proposal for bringing the troops home.

Andrews also blamed Bush, describing as “unforgivable” the administration’s “deliberate misrepresentation of intelligence” in the lead up to the war, and one of the worst transgressions of the Bush era. The others, Andrews said, include the administration’s illegal wiretapping program, which the congressman described as “the most dangerous violation of individual rights since the Japanese were interred in camps during WW II,” and an overall divisive politics championed by the president and his allies.

The fact that Andrews served as a designer of the war resolution as America’s unpopular occupation of Iraq enters its fifth year shouldn’t break his primary candidacy by any means, according to Dr. Brigid Harrison, political scientist at Montclair State University.

“At that point in time, my belief is he was following his conscience and doing what he thought was right for his country,” Harrison said. “I don’t think that one single thing is going to be enough for voters. Remember, Rob Andrews’s views on the war were consistent with a lot of New Jerseyans’ thinking post 9-11.”

“Whether he was a supporter or an architect, I don’t think the public is going to make that distinction,” Marbach said. “They’re going to blame Bush.”

Concerning the Andrews-Norcross connection as copies of Gannett’s Trenton bureau chief Bob Ingle’s “The Soprano State,” describing Norcross’s tough guy tactics, adorn bookstore shelves around New Jersey, Harrison said, “Voters here don’t seem to care a lot about party bosses. They tried to link Corzine with Norcross and Menendez, McGreevey and Florio in general elections were all depicted as candidates with ties to bosses. It doesn’t seem to matter.”

“In New Jersey, you’re supposed to have a boss,” Marbach said. “The only way that could hurt is if you get some do-gooder wing in a general election that gets traction.”

But whether that support will translate into votes for Andrews when he doesn’t have any organizational lines, in an election year when thousands of new Democratic voters participated in the Feb. 5 presidential primary, remains a question mark.

Marbach doesn’t believe voter enthusiasm for presidential politics will impact a senate race heforsees will draw about 20% of registered voters – and that could benefit Andrews if the machine support he has stays solid.

“I see voter confusion,” Marbach said. “A lot of people are going to think they already voted in the Feb. 5 primary.”

Said Harrison, “We have a whole new cadre of registered voters who are unpredictable. “Neither George Norcross nor (Bergen County Democratic Organization chairman) Joseph Ferreiro can predict what many of them (1.1 million registered Democrats) are going to do.”

Whatever energy Barack Obama and Hillary Clinton combined to create in their primary here, Brendan Gill, campaign manager for Lautenberg, said Andrews with his record on the war in particular can’t credibly embody the change theme.

“Voters want change, but the change they want is from the failed Bush-Cheney policies that Congressman Andrews has been enabling for years,” said Gill. “Whether it is his authorship of the Iraq war resolution, his continued parroting of Bush talking points on the war or his insistence that the war was the right thing to do even though no weapons of mass destruction were found, Congressman Andrews has shown himself to be an enabler for the Bush Administration time and again.” 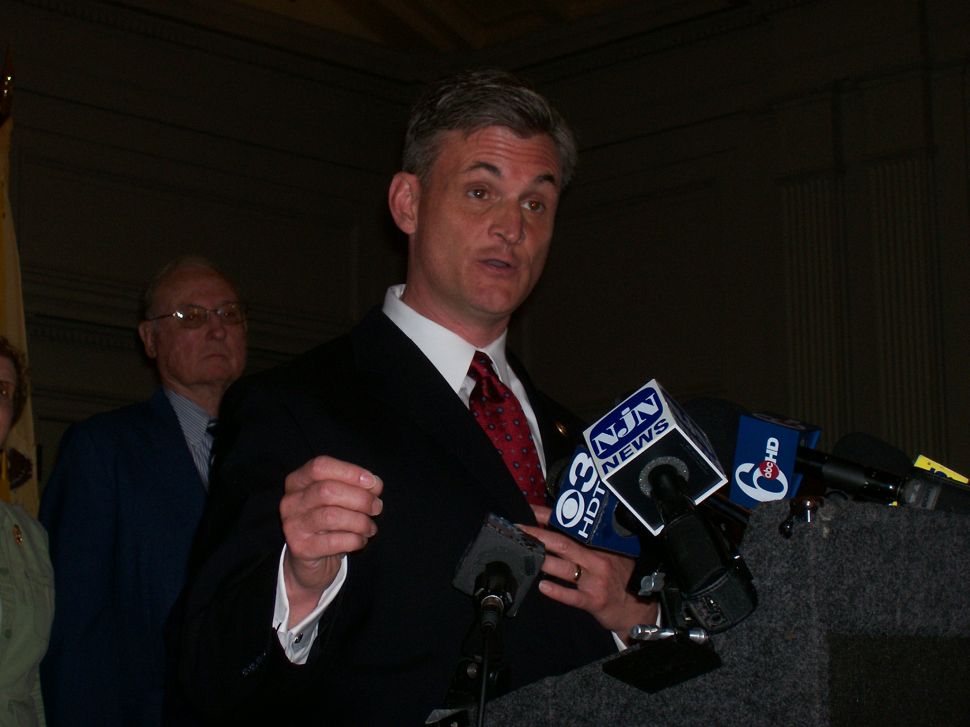